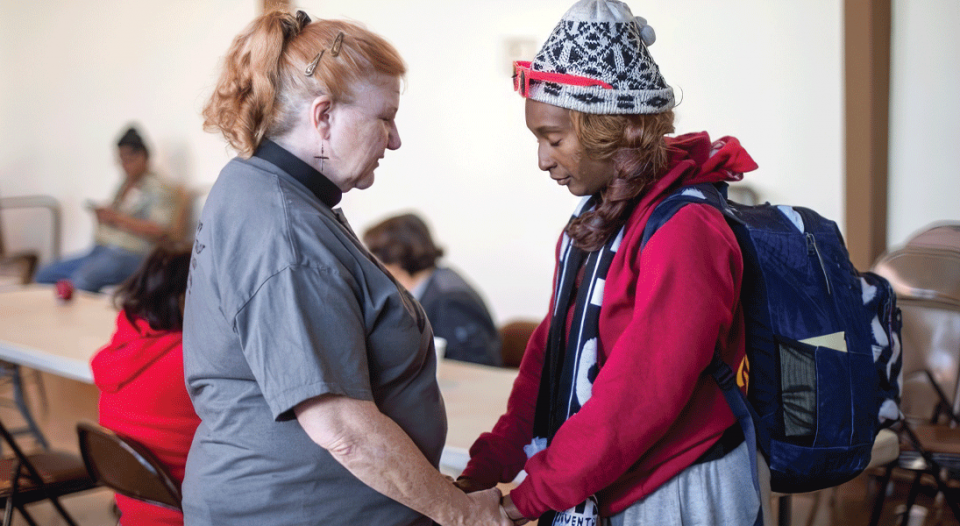 For years Marsha Harris worked at various congregations—first as a layperson and then while waiting for her first call—before a class attended by only a handful of people made her feel that God wanted her at Central Lutheran Church in the Van Nuys neighborhood of Los Angeles.

While interning at Central several hours per week, she recognized a need in Van Nuys and started an informal English class. About 25 people participated in the first class, and it has continued to grow.

“Those English classes sucked me in,” she said. “People who came said, ‘I want to help my kids with homework, and I need a better job to be able to feed my family as well as give them housing.’ And this place had looked vacant or intimidating to the surrounding neighborhood for a long time because of the homeless community. But people seeing that there was this opportunity to come back in helped a lot.”

That was only a first step for Harris, whose pastoral work represents a career shift after years of studying and working in urban planning and business management. She said God had spoken to her about creating a multilayered outreach platform that would not only redevelop the once massive congregation but also serve specific needs in the community—whose homeless population is substantial—and make the church financially sustainable so it can continue after she retires.

Harris has developed these plans on foot. She has walked the neighborhood for years, even before receiving her official call.

To that end, Central has expanded youth programs, developed a ministry for the Spanish-speaking population and staffed a mobile food truck for the relief agency Hope of the Valley Rescue Mission. Central is also part of a new parish, serving the San Gabriel and San Fernando valleys, for which at least a dozen area Lutheran congregations will share resources, facilities and ideas.

Harris has developed these plans, in large part, on foot. This mother of three adult children has walked the neighborhood for years, even before receiving her official call. She doesn’t wear a collar, but she introduces herself to anyone who will listen and talks about what Central is doing.

“I’m dang persistent,” she said. “I don’t take no for an answer. I don’t mind locked doors. Multiple times when I’ve been out walking, the door has been opened unexpectedly. There’s one larger complex down here, and three or four of the families that participate in either camps or English classes are here because I walked in one day when the door was open.

“I talk to people as they’re coming and going from school. And once we started the mobile food pantry, we exploded with the fact that we care enough about them to bring food into their lives, as well as offer English classes and Las Posadas and toys for their kids at Christmas.”

Each program that began small has grown, Harris explained. Hosting Las Posadas—a celebration that honors the Holy Family’s journey to find lodging in Bethlehem—began with a half dozen people and grew to more than 70 this year. At Christmastime, the mobile food truck assisted more than 200 households.

The atmosphere at Central is a stark contrast from what treasurer Barry Smedberg recalls from when he first joined as a child in 1955. He said the congregation once had about 2,000 members, most from Germanic or other European backgrounds. Central didn’t keep up with the changing demographics, he said, and the membership dipped until regular weekly attendance was 15. There were discussions to close the church.

Smedberg, who was married at Central and had his children baptized there, wanted to keep the congregation going. As soon as he met Harris, he believed she had the skills to lead the charge. “When she was interning here, we were ready to take her, right away,” he said. “It was her personality and the fact that she really believed in Christ as the way to go. The fact that she had had a lot of organizational skills in business helped because that’s what we really needed.

“We needed somebody who was a little bit of a self-promoter, who would get out there and do something and tell everyone what we’re doing.”

While worship attendance remains small, it has doubled since her arrival, Harris said.

“This church doesn’t worry how you look or who you are. I watch her welcome anybody who comes through those doors.”

Many of those welcomed at worship are homeless, which is something that Mary Ann Matlock understands. An assistant to Harris, Matlock has experienced homelessness. She remembers her first meeting with Harris.

“I didn’t realize she was the pastor,” Matlock said. “She invited me to services and I came. It was refreshing. This church doesn’t worry how you look or who you are. I watch her welcome anybody who comes through those doors. She’s accepted in this community because she goes into this community. She’s not afraid to go up and give somebody a hug, and she really listens to them.”

Matlock said she’s watched people in dire shape come to worship “and it changes them. It’s like they become a different person.”

Smedberg agreed: “The Lord wants us to be here and to serve those in need, and who will, if not us?”

Harris hopes to provide for spiritual, physical and emotional needs, and she understands this will take time. One key element of Central’s outreach program is the church’s in-home Bible study groups, which likely will begin with many people who speak Spanish and were raised Catholic.

As Central continues to grow, Harris said, God keeps sending her volunteers of various backgrounds. Instead of simply telling them what to do, she discovers their strengths and believes that God is moving them in that direction.

“Little by little, God sends us people and time to do the stuff we need to do,” she said. “In the meantime, people are my first priority.”

For more information, go to centrallutheranvn.org.

A night out in the cold