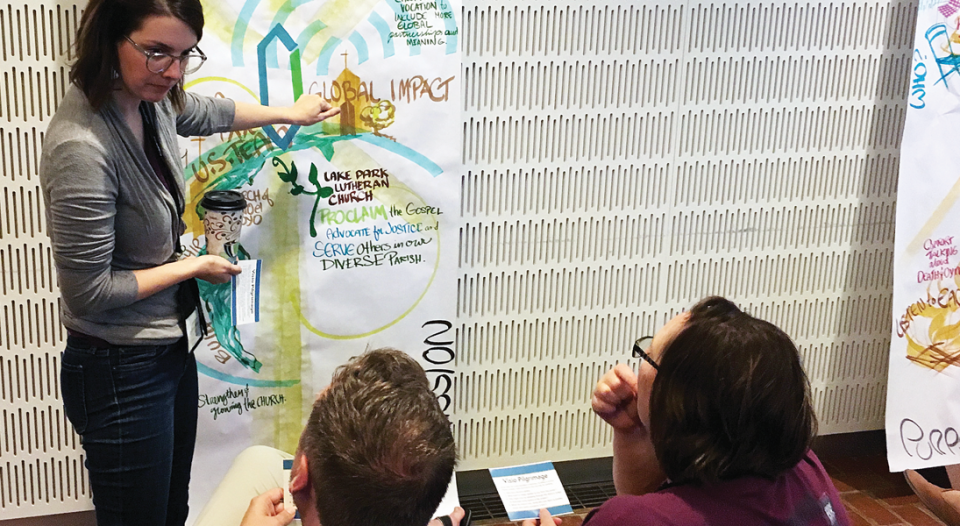 Leaders involved in the Communities of Calling Initiative gathered at Collegeville Institute in 2019 for a collaborative workshop that included original visuals created by Tim Foss (morebelief.com) to portray congregational project proposals.

Ina Goetzinger loves to knit. A maker of shawls for parishioners who are ill or hospitalized, she says a prayer for healing with every stitch.

But her pastor, Edwin Weber, said Goetzinger didn’t see her knitting as a calling until their congregation, St. Mark Lutheran in Spokane, Wash., implemented its Communities of Calling Initiative programming. After that epiphany, Goetzinger shared her gift in an intergenerational knitting luncheon at St. Mark this past February. Within a couple hours, the number of prayers stitched into the world multiplied.

These are the fruits of the Communities of Calling Initiative, a five-year ecumenical project begun in 2019 to help congregations grasp the importance of vocation, said Jane Patterson, project director. Hosted by the Collegeville Institute and funded by Lilly Endowment Inc., the initiative includes 14 congregations, among them St. Mark and three other ELCA churches.

Each congregation applied to participate in the initiative, which invited them to plan new projects and/or enhance existing ministries using a calling framework. During their five-year journeys, congregational representatives will meet for joint workshops at Collegeville to learn and share stories from their contexts.

Laura Fanucci, who directed the initiative in its first year, said the project empowers individuals and members of congregations seeking to do God’s work. “God is calling each of us, all life long,” she said. “But it can be hard to hear God’s call, so we need the wisdom and practice of Christian discernment to form us in habits of listening and responding.”

The vocational habits or practices passed on to participants are storytelling, listening, discernment, action and reflection. In year two of the initiative, Patterson said, congregations had to contend with the pandemic, and as the situation evolved, they returned to vocational questions explored in year one: What are our core callings? How do we live into them now?

When Stephen Zeller, pastor of St. Paul Lutheran Church in Cole Camp, Mo., introduced members to the initiative in 2019, he began with the basics, sharing a “vocabulary of vocation” and preaching a series of sermons on the topic.

“I had said there had been a robbery and the church had stolen the word ‘call,’” Zeller said. “I’d ask, ‘How many of you feel like you have a calling?’ The usual response was, ‘I never wanted to be a pastor.’ God calls us to wholeness of life, and that’s both in our jobs and relationships and our everyday living.”

Prior to participating in the initiative, St. Paul member Jean Healan didn’t recognize callings in ordinary life. “I used to think call is something that comes from outside of us—something people heard if they were special enough to be called,” she said. “I now believe call is something that is built into all of us. It comes out of who we are created to be, who we are before our true self is buried by oughts and shoulds.”

In the second year of the initiative, Zeller; his wife, Kimberly Knowle-Zeller, another ELCA pastor; and St. Paul’s Community of Callings committee offered programming such as a virtual retreat on lament and loss and an internship program for young women, led by Knowle-Zeller.

For the internship, the young women met over the summer with a variety of individuals, via Zoom or in person with physical distancing, to discuss callings. Participant Camryn Schear said in a Facebook post that the internship helped her figure out that “God’s calling for me is not confined to what I want to do with my life. … I am called to be a daughter, friend, student, athlete and a big sister.”

Such personal revelations have given way to a fresh understanding of community engagement in Cole Camp, Zeller said. “This has given us new life to see ourselves actively participating in God’s kingdom here,” he added.

Located blocks from where George Floyd was killed by a police officer in May, Holy Trinity Lutheran, Minneapolis, was vaulted into participating in God’s kingdom on earth as the congregation joined the community in its grief and outrage.

Ann Schrooten, a staff member of Holy Trinity, said involvement in the Communities of Calling Initiative prepared the congregation to answer the call of the moment, which meant providing personal care items to protesters and later becoming a neighborhood food pantry.

“When deciding upon our [initiative] theme last fall that ‘everyone has a story worth hearing,’ we couldn’t have possibly known how our church would be thrust into living out this belief in the midst of the uprising that has called us all to more humble acts of listening and more tangible acts of advocacy, compassion and love for our neighbors,” she said.

“When deciding upon our [initiative] theme last fall that ‘everyone has a story worth hearing,’ we couldn’t have possibly known how our church would be thrust into living out this belief.”

At the same time, members of Lake Park Lutheran Church in Milwaukee took to the streets to advocate for racial justice. Its pastor, David Dragseth, echoed sentiments regarding Lake Park’s activities: “It was not a big leap for our mainly white congregation to participate in a lot of the advocacy and protests [following the death of George Floyd], to do the work that our entire city needs to do. I didn’t perceive that [the initiative] was gonna prepare us for this cultural shift, but it really did.

“Who would have thought that Lutherans talking about ‘the priesthood of all believers’ is going to lay the groundwork of things we can’t imagine?”

Lake Park’s involvement in the initiative is unique in that it incorporated its partner congregation in El Salvador, Llano El Coyol Iglesia Luterana, in its programming and even planned some joint trips for 2020. The pandemic has delayed those plans, yet Dragseth has kept in close contact with leaders at Llano El Coyol, and this year, he said, their relationship has morphed into “mutual conversation where we discerned what we’re supposed to do in this time.”

Both congregations are offering virtual worship, which makes it easy for them to join each other’s services or programs on occasion.

A year earlier, Llano El Coyol’s artwork inspired a project at Lake Park. Member Aaron Boyd, a professional illustrator, created a mural in the church building that reflects the diversity of Milwaukee’s civic leaders. This and other activities inspired by the initiative represent an openness to being called as a church and as a nation to listen to stories that have been traditionally ignored, Dragseth said. “The church can be a place of that … and it’s pretty powerful what difference it makes for our community,” he said.

This passion for stories and listening lies at the heart of the initiative. “As you tell the story of today, tomorrow or the next day, you begin to know how God is present [in your story] and how to listen for the presence of God in someone else’s story,” Patterson said.

Congregations, she explained, are saying, “This is what we learned about God when we did those things.”

A hands-on approach to vocation

‘Startled’ by the good fit

“Everyone belongs in God’s family”

‘The 10 most satisfying years of my life’