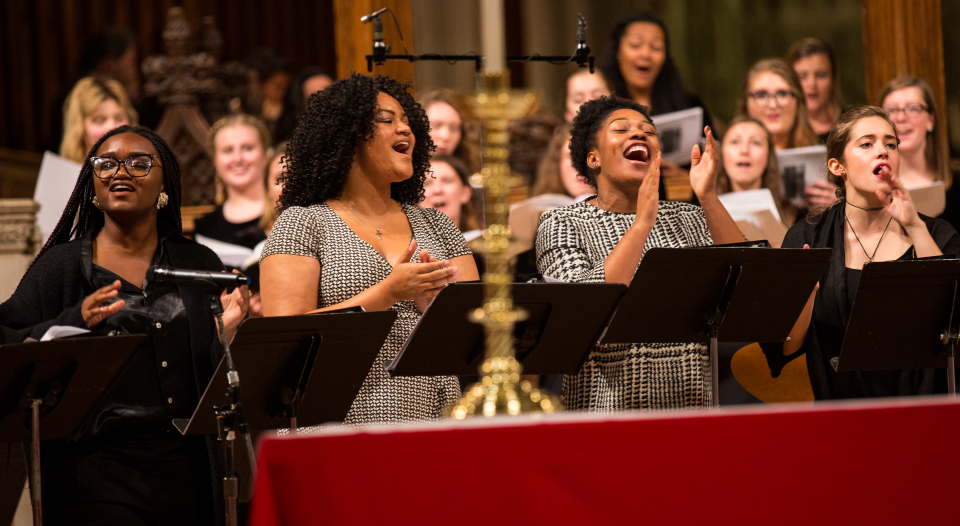 Most people are familiar with Johann Sebastian Bach, having heard his more famous pieces, such as “Toccata and Fugue in D minor” or his first cello suite as performed by Yo-Yo Ma. Others may be better aquainted with modern artists’ adaptations of Bach, such as Procol Harum’s “A Whiter Shade of Pale” or Lady Gaga’s “Bad Romance.”

But 300 years ago, Bach was like every other Lutheran musician: known among his colleagues but unknown throughout Europe or even his native Germany. His compositions weren’t widely celebrated until nearly 50 years after his death from a botched eye surgery. More than 150 years would pass before adaptations of his work came into vogue.

But whether Bach’s music is heralded in concert halls, enjoyed on dance floors or even studied and sung in churches and universities, it represents the many facets of a Lutheran’s experience with music. The Lutheran musician’s role focuses on bringing music to the homes, where people can learn it, learn from it and recite it whenever necessary. Bach has always been an outlier among Lutheran musicians, who are better known for how they use music inside the church than outside in the world.

The participation of the assembly

Chad Fothergill is a church musician earning a doctorate in musicology. Through his studies, which focus on the role of the cantor from the Reformation to the emergence of Bach, he has noticed a unique and vibrant aspect of Lutheran musical heritage not seen in every Christian tradition.

“I would say that the Lutheran understanding of music is probably somewhat unique in terms of its ability to teach and its necessity in worship,” he said. “In the Anglican and Episcopal church, they have a lot of music, but it is for the choirs to sing for the people. Lutherans, I think, have a fairly good philosophy for the participation of the assembly, and we trace that back to [Martin] Luther and his reforms.”

The philosophy of assembly participation, rather than choral presentation, is a big reason why the Lutheran musical heritage plays out in congregations rather than concert halls, and why the entire Bach family (his son Carl Philipp Emanuel Bach has become celebrated in his own right as a composer) both exemplify Lutheran musicians and stand out among them. The lessons Bach employed came straight from the originator of the Protestant Reformation.

Luther’s impact on music is almost as well-known as his 95 theses. His hymn writing has often been described as “prolific” and includes notable pieces such as “A Mighty Fortress Is Our God.” His love of music came partly from his understanding that it was a form of education for parishioners.

Unlike modern theological institutions, campuses during Luther’s—and Bach’s—time had both conservatories and seminaries. Being a church musician was often seen as a pathway to becoming a pastor. So music became a foundation for the theological education of parishioners, imparting wisdom and helping them remember important lessons and verses from the Bible.

“[Music] wasn’t a playlist meant to attract people, but it was a theology that was formative that you sing from one generation to the other,” Fothergill said.

Campuses during Luther’s—and Bach’s—time had both conservatories and seminaries. Being a church musician was often seen as a pathway to becoming a pastor.

One example of ancestral music is the book of Psalms, a collection of lyrics to long-since-vanished worship music. Luther recognized the power of using variations on the psalms and other biblical verses.

Luther established music as a form of worship, and in congregations, hymns developed into more than just adaptations of Bible verses, becoming a type of madrigal, music set to lyrics and arranged in multiple vocal parts.

The madrigal started as secular music in Italy, where, in 1609, German Lutheran Heinrich Schütz traveled to study under composer Giovanni Gabrieli and noticed the potential for this style in his church. Schütz helped create a collection of hymns for worship, ushering in the Baroque period in Germany and establishing music as a form of deeper education.

Not long after, Dietrich Buxtahude began adapting well-known Lutheran hymns for his congregations. His longest and most prominent tenure was at St. Mary’s in Lübeck, where he wrote many original compositions and began exploring another Italian invention, the cantata, with the potential to teach theology. As a young church musician, Bach walked more than 250 miles from Arnstadt to Lübeck so he could learn from Buxtahude over three months.

As a result, Bach’s body of work became emblematic of Lutheran musical culture, a mix of what had been done and what could be done. Like Buxtahude’s music, his was written for worship but also for performance. He favored heavy theological themes that parishioners could understand and learn from; several of his cantatas are still used today, especially around Easter and Christmas. As much as Bach’s work became part of history, it can still be used to instruct.

“I think it’s really interesting where Bach’s cantatas actually become preaching materials, where pastors can sometimes look at the way he sets something and explain it to an audience who can hear the music as well,” Fothergill said.

Bach’s body of work became emblematic of Lutheran musical culture, a mix of what had been done and what could be done.

At the same time, though, Bach is well-known beyond the hymnal.

“We can think about some of the famous names, but we also just know there were so many musicians whose names we don’t know who did this sort of work of teaching and leading people in song and encouraging them to sing in the home, training young musicians, whose works might have been lost but who did it faithfully,” Fothergill said.

“It’s easy to focus on the individuals, but really they are just the tip of the iceberg on the whole economy and sense of vocation.”

After the Bach family’s prominence, Johannes Brahms was the only major classical composer affiliated with the Lutheran church, though he foreswore faith traditions as an adult. Lutheran music continued to thrive on the classical scene, with original compositions giving way to adaptations, such as Felix Mendelssohn borrowing from “A Mighty Fortress Is Our God” for his fifth symphony and Arnold Schoenberg’s many orchestrations of Bach pieces for modern-day listeners.

In the United States, Lutheran hymnals came to symbolize the evolution of American culture. Pieces seen as strictly Lutheran started sharing space with Victorian-era hymns that were already influencing churches in the colonies.

As the nation continued to evolve, the music continued to reflect the changes, absorbing styles heard in saloons and fields and incorporating Black spirituals and emancipation hymns into the repertoire of the sanctuary.

“There’s just a lot of cross-pollination in different styles, especially nowadays in the United States,” Fothergill said. “Once we got into the 20th century, there is the borrowing of shape-note tunes like ‘Amazing Grace,’ which weren’t necessarily sung in Lutheran circles but sort of just entered the hymnbooks and songbooks.”

The present and the future

Beyond the church walls, technology played a role in what congregations sang on Sundays. Digital libraries and streaming platforms have shifted music from congregational instruction to personal preference. When the pandemic forced congregations online, the problem of music selection and performance style intensified. The idea that music had to be perfect, as if for a congregational equivalent of MTV or CMT, has created a greater problem, obscuring the role songs and hymns play in the church.

Today’s complicated world has threatened our musical heritage, making music less of a tool for worship and education and more of an opportunity for onscreen performance.

But there is hope, especially as more people are vaccinated and return to the sanctuary, that the pandemic period might help us reconsider where worship music should go next. The idea of segregating traditional and contemporary music has shifted over the past 15 months, and returning to the church might mean embracing all types of music as part of worship instead of just the hymnal or a contemporary songbook.

Another task for the present and future, especially given last summer’s protests demanding more social equity and anti-racist measures, is to examine further the role of so-called Western music in colonization and racism. “We really have to grapple with, to what extent have different repertoires participated in colonization efforts of upholding Western aesthetic principles advocating for white-body supremacy?” Fothergill said.

“The legacy [of Lutheran music] is more about the vocation of musician … than the famous musician.”

Doing that will require musicians to look beyond traditional instruments and classical music known in European sanctuaries for centuries, and toward a type of thinking that is Lutheran in its foundation.

“The legacy [of Lutheran music] is more about the vocation of musician … than the famous musician,” he added. The musician works in the proverbial dirt, getting their hands dirty as they learn about other sounds, techniques and ways to teach parishioners.

Erik Routley, an English church musician and musicologist, said that the church musician is the most promiscuous religious vocation, that musicians are most aware of different styles and borrow from them for their own church music.

This is common in today’s American Lutheran churches, particularly the ELCA, whose new worship supplement All Creation Sings adapts to the modern church many hymns from cultures beyond the German Lutheran tradition. But there is more work to be done, Fothergill said, to incorporate non-Western music into the Lutheran church, not by tokenizing a different culture but rather by celebrating and understanding its sounds.

Fothergill wants to encourage a mindset that makes such sounds “part of our musical diet. A lot of things are not Lutheran in origin, but they are used with a Lutheran purpose.”