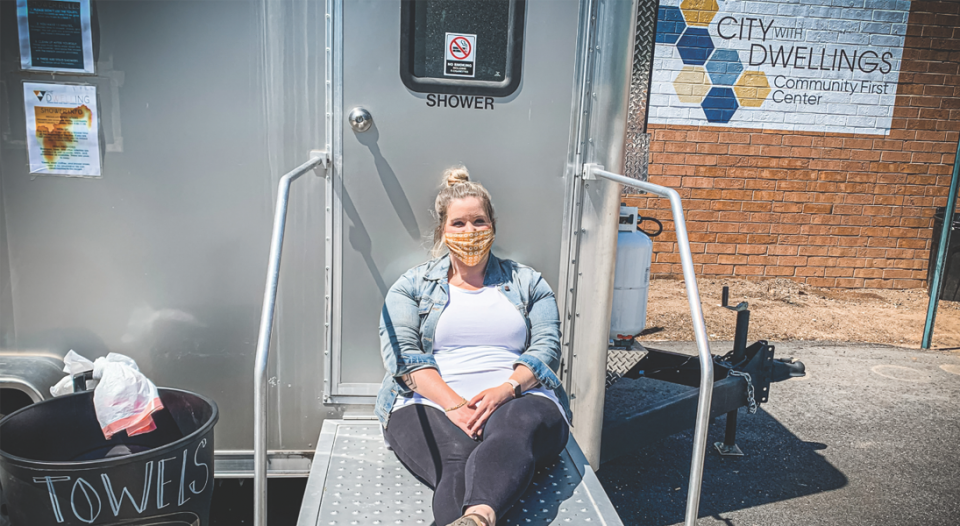 In spring 2020, Emily Norris, pastor of the Dwelling, launched a free shower ministry for those in need in Winston-Salem.

Emily Norris had been serving at Augsburg Lutheran Church’s winter-overflow homeless shelter in Winston-Salem, N.C., for a few years when she heard the rumblings. Many of the guests opened up to her, told her stories. She wasn’t ordained, but they saw her as their pastor. One need kept arising.

“I heard very loudly that there was a deep hunger for a faith community that looked like them,” Norris said. They craved space where they could worship God and not feel judged for their housing status, their past or their appearance. Heeding their calls led Norris to Wartburg Theological Seminary, Dubuque, Iowa, to become a pastor.

By 2020, Norris was ordained and serving as the mission developer for the Dwelling, an ELCA faith community designed for, but not exclusive to, people in Winston-Salem who are or have been homeless. Partnerships with Augsburg, the North Carolina Synod, the Moravian Church in America and the ELCA churchwide organization provide funding. “I was so certain I was being called [by God] to start the Dwelling that even though the synod had [only] part-time funding for the position, I [took it],” Norris recalled.

The Dwelling rents space from a local nonprofit that focuses on addiction, mental health and homelessness. Unfortunately, Norris received the certificate of occupancy for the space a day before the pandemic necessitated a statewide shutdown. There was one silver lining. “Before I knew it, there was extra funding from the [ELCA COVID-19 Response Fund], and it got me to full-time ministry,” she said.

Starting a church during a pandemic wasn’t ideal. Safety restrictions made worship impossible, and the population she’d hoped to reach became especially vulnerable. So Norris did what many ELCA leaders and congregations were forced to do last year: she pivoted.

After assessing community needs, Norris determined that free mobile showers would be the Dwelling’s anchor ministry. Visitors could take showers and receive clean underwear, socks and T-shirts donated by members of the Dwelling’s synod conference.

“It was really a profound way to start,” Norris said. “Showers provide a sense of dignity and are therapeutic. I don’t know a better way to remind people of their baptism.”

Eventually the showers became a permanent fixture and new funding allowed the faith community to hire another pastor, Tobi Fleck, to manage the ministry.

Many who use the showers now also volunteer there. “One of the things the Dwelling takes seriously is that it is a community for folks who have experienced or are experiencing homelessness, where they can be leaders instead of guests to the ministry that God is working through the community,” Fleck said.

“Showers provide a sense of dignity and are therapeutic. I don’t know a better way to remind people of their baptism.”

And then in July, city officials invited Norris to provide pastoral care and community activities at a local hotel where they had arranged to shelter 60 of the most fragile people who were homeless. That experience inspired her to develop the Dwelling Place housing initiative.

Looking back on the Dwelling’s first year, Norris said that “the shutting down of the world actually opened up our impact.”

Worship at the Dwelling is “like coming home,” said member Cheryl Morrison.

With a living room for its sanctuary, couches and chairs for its pews, and food that flows freely, the Dwelling takes seriously its mission of hospitality. “It has a feather touch, where you can come in and get comfy,” Morrison said. “It’s OK to talk to the person next to you, get up to get a cup of coffee, doughnut or muffin.” She calls it one of her “God spots.”

“This is a church for God’s people—the homeless—and they are the foundation of what makes this church work, which in my eyes is extremely special,” added Ryan Sprinkle, a council member. “You have people right off the street with their backpacks.”

A maintenance worker, Sprinkle first met Norris at the shelter, where he slept years ago. He has since found housing through connections forged at Augsburg, but he credits the Dwelling with getting him back to church after a yearslong absence. “Everybody needs love and compassion and a safe spot for a few hours—to come and hear music and hear the word and get open about their feelings and have nobody judge them,” he said. “People feel comfortable sharing their stories [here] because they know people beside them have experienced the same thing.”

One of those people is John Whitely, who knew Norris through Augsburg’s shelter. In fact, it was Norris who came to Whitely’s rescue when he accidentally overdosed in the shelter’s restroom after a Christmas party. When he woke up in the hospital, his first thought was, “Oh, you’ve done it now, Johnny. You’ll never be able to go back there.”

When Whitely woke up in the hospital, his first thought was, “Oh, you’ve done it now, Johnny. You’ll never be able to go back there.”

When Whitely saw Norris the following winter, she came up to him, smiling, and asked if he would be returning to the shelter. “I’m like, ‘Oh, God. I didn’t think you’d ever want me there,’” he remembered. “Ever since then, I would do anything she asked.”

Today, Whitely belongs to and volunteers at the Dwelling. “I didn’t go to church,” he said. “I didn’t like the way people treated you there, until I met Emily. When we started to meet at [the Dwelling] I asked her, ‘Can you baptize me?’ I knew I needed to be baptized—it says that in the Bible.”

Norris was delighted to baptize him, saying, “To have seen [John] at so many stages of life, to literally have been with him near death and in life—what a gift for a pastor.”

Whitely’s story is one of many shared at the Dwelling, often as part of discussion during worship. Such openness, Norris said, is the heart of the church: “We’re creating a community that welcomes the messiness of being human. Vulnerability is powerful. We are our strongest as a community of faith when we are honest with each other.”

Added Madi White, student intern and a candidate for ordination in the Moravian Church, “We don’t tell people they need to have it together—they can bring all the pieces of themselves to us and the love of our community will fill in the cracks.”

A center for hope

A night out in the cold

Where all may dwell
Following the example of Jesus, Christians have always responded to the physical and spiritual needs of people they encounter. Addressing the need of the vulnerable in Winston-Salem, N.C., the Dwelling takes an immersive and particularly integrative approach. What can the rest of the ELCA learn from them?
Download Now