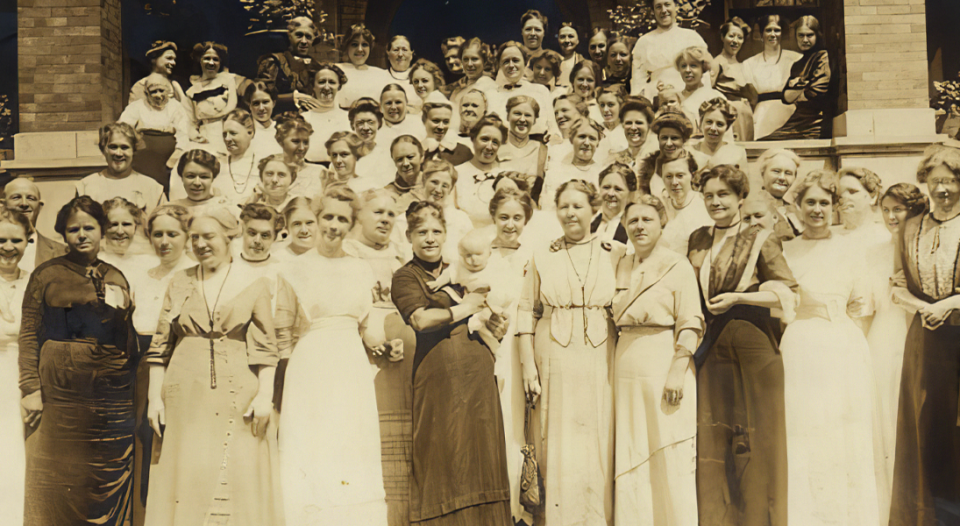 At the turn of the 20th century, the role of women—in not only the church but also the world—looked very different from the way it does today. Most women stayed in the background, deferring to men and working in the home.

But Emmy Carlsson Evald was not most women. Though she lived during a time when women were subservient to men, Evald championed the rights and ideas of women in the church and through her work as a suffragist and missionary.

Evald was born in 1857 to Erland and Eva Carlsson, who settled in Illinois. As a child, Evald drew inspiration from both her parents: her father, a Lutheran pastor, advocated for education and helped found Augustana College in Rock Island, Ill., and her mother, in addition to running a household with eight children, took an active role in caring for other immigrants and members of the community.

“She could see the power of women,” said Ann Boaden, a professor emerita of Augustana, “and though Mrs. Carlsson’s work was as a support to her husband—and that was certainly the role of women in that day—she saw the power that women had, and that [this] power could be pushed beyond that role.”

After graduating from a girls’ school in Sweden, Evald enrolled at Rockford (Ill.) College, where she befriended activist and future Nobel Peace Prize winner Jane Addams. She then earned a master’s degree from Augustana. In 1884 she married Carl Evald, a Lutheran pastor, and the couple raised two daughters, Annie and Lillian.

As a minister’s wife, Evald found herself in a position to make a greater impact on the world than most women could in those days. “She was always at these conferences with her husband, and the women would sit around and talk and have coffee,” Boaden said. “And she decided, ‘We can do more than this—there’s mission work to be done.’”

Through those conversations, Evald established the Women’s Missionary Society, which she presided over for 43 years. An early precursor to Women of the ELCA, the society organized and sponsored mission work both in local communities and abroad.

“She said, ‘We can make an organization where we each are doing individual things in our own parishes, but we can do more if we get together,’” Boaden said. “So she said, ‘Let’s figure out a way to get together because we get stronger when we’re together.’”

In her role with the Women’s Missionary Society, Evald supervised the construction of 74 buildings around the world, including five homes for women. She also visited mission stations in India, China and Palestine. She was able to do all that with the help of Lutheran women organized and energized by the formation of the missionary society.

“There was this big repository of power that wasn’t being utilized and tapped into,” Boaden said. “And because of her personality—she was charismatic and determined—she was able to harness that power.”

Evald also applied her dedication and determination to winning white women the right to vote. She played an important role in the U.S. suffrage movement, joining Susan B. Anthony and Catharine Waugh McCulloch (the latter a friend from Rockford College) as a charter member of the First International Women’s Suffrage Conference.

“We have a lot of freedoms today in terms of choice of careers and our financial health,” said Sharon Wyman, Evald’s great-granddaughter and the author of Power, Passion, and Faith: Emmy Carlsson Evald, Suffragist and Social Activist (Open Books Press, 2022). “I hope that women today recognize this was a struggle that took 75 years to get the vote, and that wasn’t for everybody, since women of color didn’t get the right until later. The fact that we have choices today is because women like Emmy fought so hard for women’s rights.”

Wyman, who grew up hearing stories of her great-grandmother’s remarkable life and love for helping others, said exploring the impact of Evald’s advocacy deepened her appreciation for her relative and all the women who had worked alongside her.

“I hope [women today] realize that Emmy was one person, and there were a lot of women fighting this fight,” she said. “And I hope they have a respect for the struggles that those women went through so that we have the freedoms we have today.”

From motherhood to suffragist work, Evald saw every action as extending God’s love into the world. “She was a woman of strong faith,” Wyman said, “and she considered herself in her master’s service.”