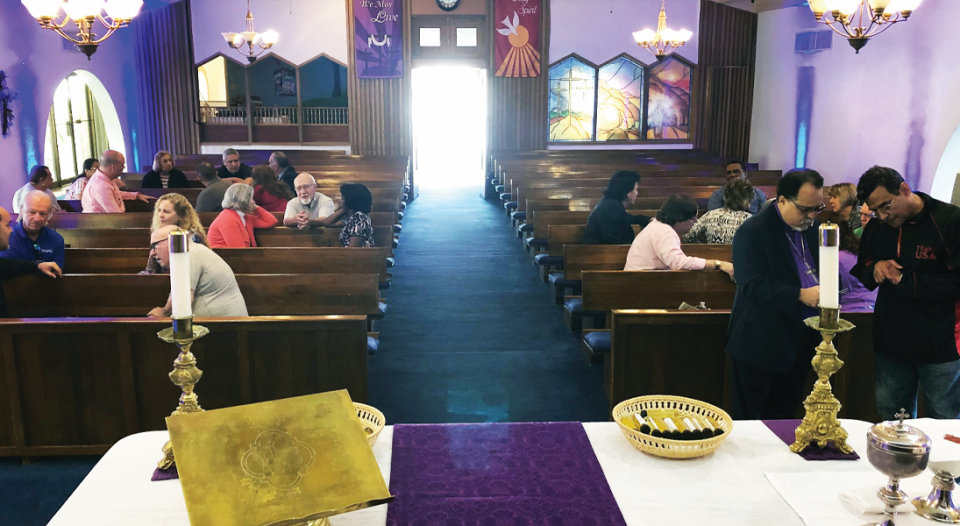 Courtesy of the Florida-Bahamas Synod

After the closure of St. James Evangelical Lutheran in Coral Gables, Fla. (pictured here during its final service), the Florida-Bahamas Synod gave almost one-tenth of the nearly $10 million it received from the sale of the congregation’s property to ELCA churchwide ministries.

After the closure of St. James Evangelical Lutheran in Coral Gables, Fla., the Florida-Bahamas Synod found itself with nearly $10 million from the sale of the congregation’s property. Without skipping a beat, the synod council decided to give nearly one tenth of this to ELCA churchwide ministries.

“There really wasn’t a debate,” said Cheryl Stuart, who recently completed 12 years’ service as synod vice president. “We have a history in the synod of giving first fruits—first fruits tithed to the church.”

From the total offering of $956,251, 60% was designated for specific ELCA ministries and partners (30%, or $286,875, to the ELCA’s congregational vitality efforts and 10%, or $95,625, each to Lutheran Disaster Response, Lutheran Immigration and Refugee Service, and ELCA Ethnic Specific and Multicultural Ministries). These were areas of special concern not only to the synod but also to the late ELCA Vice President Bill Horne, in whose memory the gift was made.

“These ministries that we gave the money to were exactly what he was passionate about, and a great way to honor his legacy,” said Rob Rose,  assistant to the bishop for administration in the Florida-Bahamas Synod.

A longtime lay leader in the synod, Horne died last August of a heart attack, at age 72. A U.S. Air Force veteran and the city manager of Clearwater, Fla., he was widely loved and respected, Stuart said. “Bill was just an extraordinary person of faith,” she added. “He believed that there is no greater calling than to love the neighbor and to serve the neighbor.”

The largest share of the gift, 40% ($382,500), is unrestricted and will be used where needed most. Unrestricted gifts are “the lifeblood” of the churchwide organization’s funding model, said Rachel Wind, ELCA executive for philanthropy.

“A gift that’s completely undesignated helps infuse the church with the opportunity to invest in new ministries while at the same time continuing the existing ministries that are so important to this church,” she said. “Undesignated funds give the churchwide organization the flexibility to direct resources where they’re needed most.”

Wind appreciates undesignated gifts for the confidence they imply. “What it says to me when we receive gifts ‘where needed most’ is this powerful trust that the donor has with us as a church and the leadership of this churchwide organization to use this money where we as a church think we need to be,” she said.

It also reinforces the interdependent and dynamic relationship among the three expressions of the church—congregations, synods and the churchwide organization. “It’s a beautiful ecosystem,” Wind added.

Rose agreed: “We understand the relation of the three expressions of the church, and we do our part as we can.”

“That congregation is now going to be helping people, not only across the U.S. but across the world.”

Though this windfall gift is the largest of its kind from the Florida-Bahamas Synod to the churchwide organization, it’s not the first, Stuart said. “We want to model what we would like people to do,” she said. More than simply emphasizing tithing, the greater point is giving sacrificially and recognizing more basically that all gifts are from God.

By reinvesting the proceeds of the sale into ministry, Rose said, the synod has created a meaningful legacy for St. James, which closed after a steady decline in membership. “That congregation is now going to be helping people, not only across the U.S. but across the world,” he said. “We are taking the legacy of St. James and living out the gospel by investing in the ministry and outreach of the church.”

In addition to bolstering church ministries, the Florida-Bahamas Synod also has worked with the developer of the St. James property to erect a building for Crystal Academy, a school for special-needs children and adolescents that had been operating out of the church.

Support the ELCA’s ministries at elca.org/give. For more information about Mission Support and stewardship, visit elca.org/missionsupport.

Are we really an aging church?

Building the church for tomorrow

A legacy of care

A win-win-win
When the Florida-Bahamas Synod decided to give $956,251 to ELCA churchwide ministries, the amount wasn’t arbitrary. It was a “tithe”—10%—of the proceeds from a sale of real estate that netted nearly $10 million. The synod gave the tithe as a “first fruits” offering. Tithing and first fruits offerings are biblical principles for giving. Though they aren’t always emphasized, these type of offerings may hold the key to both funding God’s work in the world and unlocking personal generosity.
Download Now