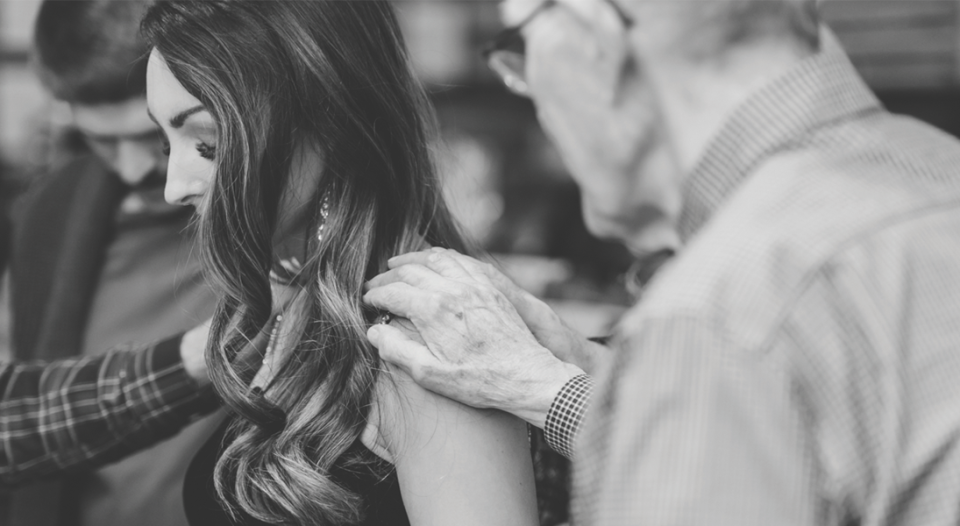 During a send-off to compete in the Miss America competition, Bergstrom received blessings from friends and family, including her grandpa and mentor Elwood Rieke, a retired Lutheran pastor. Photo: Lindsay Arbach

Reyna Bergstrom wasn’t a pageant girl growing up. But in her freshman year at Concordia College in Moorhead, Minn., a family friend encouraged her to compete for the title of Miss North Dakota, a precursor to the Miss America competition.

Still, it wasn’t the glitz and glamour that sparked her interest. It was the prospect of positively impacting youth.

“[As] family, you’re biased; it’s hard to be objective,” said Ruth Bergstrom, her mother. “[But] others were saying the same thing: they just believed she would be an amazing Miss North Dakota with the opportunity to represent the state well, but also to have such a genuine, authentic impact on young people, because she wasn’t about the tiara, the crown, at all—or the limelight. She just was so passionate about the positive influence she could have on so many lives.”

A fifth-generation North Dakotan, Bergstrom grew up in the pews of Hope Lutheran Church in Fargo, where she leads a small group today, and was valedictorian of Oak Grove Lutheran High School. She considers her grandfather Elwood Rieke, a retired Lutheran pastor, to be a mentor.

While fulfilling her Miss North Dakota duties, Bergstrom talked about her faith journey when she was able. This spring she visited a Catholic school and a Bible camp in western North Dakota, where she talked about trusting in God’s timing: “Our timing and his timing are not always going to line up. His master plan … we may not know it for years and years.”

Bergstrom relates this to her Miss North Dakota experience, arguing that if she had won the title earlier, she wouldn’t have been able to compete in the 100th anniversary pageant, meet the friends she made during that time or fulfill her duties as well as she can now.

“Had I won in 2019, I wouldn’t have been [as prepared and experienced],” she said. “I’m the oldest Miss North Dakota to ever host the title. Having that many more experiences to have the confidence and prepare me [for] this year … I’ve been able to reach that many more people and ultimately give more to this job and the people I interact with at this age than had I won when I was younger.”

“Our timing and his timing are not always going to line up.”

Ruth Bergstrom said she watched her daughter throughout the pageantry process—especially in 2020, when the competitions were placed on hold during the pandemic—and that Reyna spent time in prayer, asking God for direction in her life.

“Originally, Reyna was one of these people who likes to be really planned out and know what’s next,” Ruth said. “But through the course of college and afterward, I think God was teaching her to trust and [know] it’s OK if you don’t have the exact plan laid out in front of you.”

As part of her yearlong Miss North Dakota duties, which ended in June, Bergstrom spoke to groups around the state on the theme “The Influencer Era: Impact Beyond the Screen,” breaking down the role of technology and social media in people’s lives.

When she spoke in schools, Bergstrom was fascinated to find that students exploring the topic of social media often tally more negative than positive aspects.

“It is an incredible asset we have available to us … [but] oftentimes it replaces real-life connections and relationships,” she said. “It is important we know how to use technology responsibly. … Studies show that kids are more isolated and alone than any other time in history. While we all recognize that, it’s so hard to change habits and change the way we’re engaging in social media.”

“COVID really shifted culture,” she said. “People are so comfortable being at home that a lot of events are [still] offered virtually, which is great, because they’re more accessible. But it’s kind of sad, because … at virtual events, you can’t mingle afterward and have unplanned moments, which can be instrumental into breathing vitality into our lives.

“You wonder, what’s the world going to look like 10 years from now? As humans, we have this desire and need for true connection. And if we’re not fulfilling that need, we’re going to feel empty at the end of the day.”

Bergstrom loves to share the story of her pageantry journey and how she saw God’s hand leading her over the years, but she didn’t often speak to religious groups. Kyle Lefler, who was retreat coordinator at Flathead Lutheran Bible Camp in Lakeside, Mont., when Bergstrom worked there as a counselor and art coordinator, saw how Bergstrom revealed her faith while working with nonreligious retreat groups at the camp.

“I think where Reyna’s heart of hospitality really comes forward—and I’m sure that’s what she’s bringing to secular organizations as well—is [in] being really welcoming and open. It reflects her faith. I know she has had a lot of practice over the years … living a Christian life without necessarily using those words.”

Lefler said that, for years, the staff at Flathead wore T-shirts with the saying “Preach the Gospel at all times, and if necessary, use words.”

“[Reyna] really embodied that well,” she said. “Our way of being public servants of Christ is most often not named as such. Often we are known for our love of service of community first, and then we get to talk [about] Jesus if that feels right.”

With her title as Miss North Dakota concluded, Bergstrom is working as a marketing specialist for a hospital in Fargo. In September, she will get a new, non-pageant-related title when she marries her high school sweetheart, Collin Asheim, at Flathead. Her long-term plans include using the scholarship money she was awarded from the Miss North Dakota and Miss America pageants to pursue a master’s degree in journalism.

Bergstrom said she has come to find peace with not knowing exactly what the future may hold: “I trust if you work hard, if you put in time and treat people well and make those connections, opportunities will present themselves, and God will put a plan in place.”

My take: The search for truth