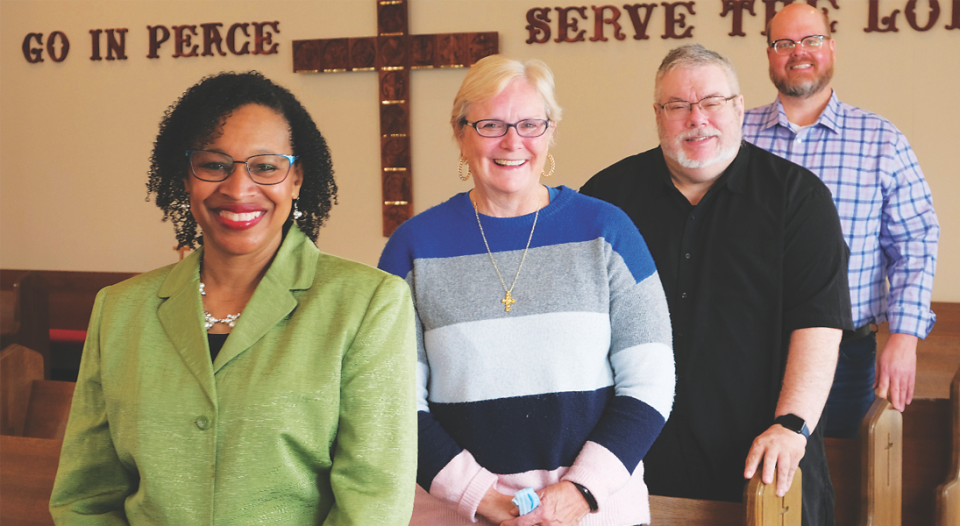 LaTesa Williams (left), All Saints president and former Redeemer president; Gloria Blankinship, former Ascension president; Brian Campbell, pastor of All Saints; and James Burkhart, former St. Mark president, gather in the sanctuary of All Saints. The new congregation was formed by a merger of three ELCA congregations in Oklahoma City.

In 2018, three small congregations within a 10-mile radius of downtown Oklahoma City—Ascension, St. Mark and Redeemer—were struggling financially to maintain their buildings and meet associated expenses. After Brian Campbell was called as the congregations’ pastor, they started discussing how they might pool their resources. They started with combined services on fifth Sundays and talked about a weekly joint meeting. Discussions about a formal merger had just started when the COVID-19 pandemic hit.

As part of the transition to online worship, the congregations combined their three live services into one Zoom session, with the feed left open afterward for fellowship. People began to share with each other what their fellow congregants needed in order to deal with the pandemic, and the others responded.

Campbell said their priority wasn’t helping someone from Ascension or St. Mark or Redeemer but helping a member of the Covenant—the umbrella term for the three congregations. Sometimes the fellowship feed lasted for hours. “That showed the members that they could work together,” he added.

Campbell acknowledges that the merger isn’t all “puppies and rainbows.” In fact, he said, it’s a “full-contact game with cuts and bruises.”

In February, the congregations held a chartering service and meeting to become a new church in accordance with ELCA guidelines. On March 2—Ash Wednesday—they officially began worshiping together as All Saints Lutheran Church.

Services are held at the former St. Mark building; Ascension’s was sold to a neighboring business during the consolidation process, and there are plans to turn Redeemer’s building into a community center.

In addition to financial savings, the merger has reduced the number of volunteers needed. In a congregation such as Ascension, with 20 active members, almost everybody had to play some role. Now, in a congregation of 70-plus people, members can pick and choose how they serve.

The merger made sense economically and logistically, but Campbell is the first to acknowledge that it’s not all “puppies and rainbows.” In fact, he said, it’s a “full-contact game with cuts and bruises.”

“The challenge during consolidation, and now as All Saints, is how we work together,” he said. Members are still trying to figure out how to merge their various ministries. People are hesitant to step on each other’s toes and are inclined to follow the routines of their old church, he added.

John and Winiferd Russell, who were members of St. Mark and then Ascension for a total of 43 years, lobbied for the merger because membership was dwindling and included no youth or young adults. The congregations were also forced to dip into their limited savings to pay monthly bills.

Campbell doesn’t dispute the numbers but adds three qualifying words: at this time. “Our membership numbers are not fixed,” he said. “Some are still coming and deciding if they want to be members.”

One unique aspect of the consolidation is that the congregations were quite different. Redeemer’s membership was majority Black, whereas Ascension and St. Mark were majority white. This, as well as other issues of inclusion, required close attention as members worked through combining the three cultures.

“It’s a great deal of change, but without each other, we all fail.”

LaTesa Williams is president of All Saints’ congregation council and was president of Redeemer, where she was a lifelong member. She said that, in the beginning, she wasn’t ready to merge. Williams called Redeemer a “safe spot” where she didn’t have to deal with politics or racism.

“There’s a lot you have to think about,” she said. “There was a process I had to go through to get to this point. It’s a great deal of change, but without each other, we all fail. We need each other.”

William Carr is chair of the property committee, which includes members from each of the previous congregations. He said the merger involved a significant amount of moving property, from an altar to office supplies to about 2,000 pounds of books.

Carr also served on the consolidation task force and said it was concerned that no group be “owner and host” to the others as they selected a building for their new worship center. The sanctuary has become a symbol of something new; the members have rearranged it twice and incorporated the altars and pulpits from the other two buildings.

“Becoming a new congregation is hard, [which is] ironic for a church that was founded on change,” Carr said. “The symbolism of the different furnishings and arrangement of the sanctuary has been a very positive image to reinforce the idea that All Saints is something new and, although we retain some of the old from each previous congregation, we wish to move forward with the new one.”

Moments in time: mergers and exile

"We need each other"
As churches across the nation face continuing challenges in maintaining their membership and financial resources, congregations are increasingly looking to pool resources and work together. Though cooperation brings challenges, congregations often realize benefits, including cost savings that can mean more resources for ministry, a revitalized sense of purpose, fresh perspectives and new relationships.
Download Now