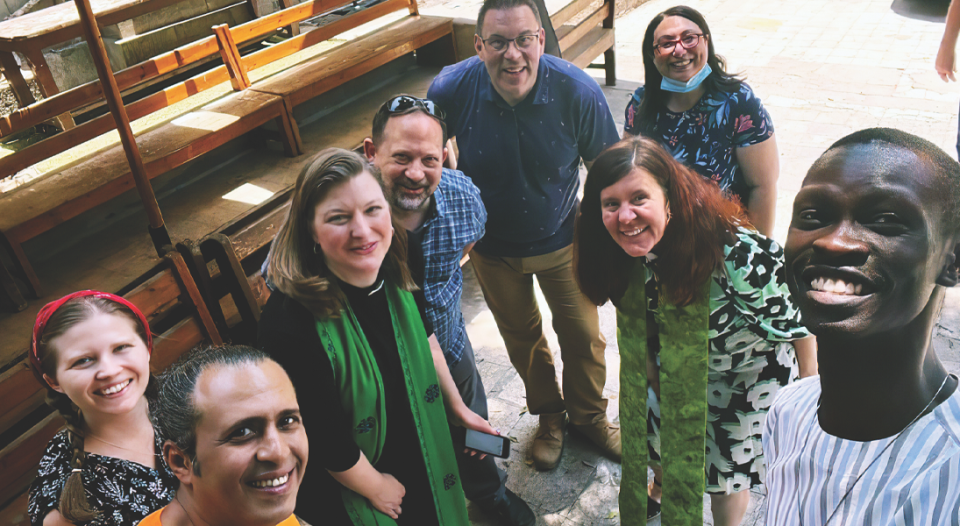 Courtesy of ELCA missionaries in Cairo

Cairo is probably best known as the home of the Great Pyramid of Giza, the oldest of the Seven Wonders of the World. Less well-known is that this Egyptian city is also home to more than 90,000 refugees and asylum-seekers, according to the United Nations High Commissioner for Refugees.

This fact isn’t lost on the ELCA, which has for more than 30 years accompanied a multifaceted ministry known as St. Andrew’s Refugee Services (StARS), located in the heart of Cairo. The ministry provides humanitarian aid using an empowerment model for individuals and families who have been forcibly displaced from their homelands.

People of all faiths find respite and hope within the compound of St. Andrew Church. StARS also uses other buildings, such as the Naimo Youth Center, and several churches to extend educational and community outreach programs.

“Refugees don’t just deserve a seat at the table of change—forcibly displaced people own the table.”

With a volunteer staff of more than 475 professionals—most of whom have personally experienced forced displacement—StARS serves more than 45,000 refugees each year. And the number of people served is growing, with a projected increase of more than 30% in global displacement during the next two years.

Most individuals who arrive at the gates of StARS have traveled long distances. Many of them are teenagers who have crossed deserts unaccompanied, having lost their parents and guardians. Within this context, StARS has evolved and adapted over the years to meet the needs of the clients who have found that the St. Andrew compound is one of the few places that truly cares about displaced people in Cairo. Even during the COVID-19 pandemic, StARS was committed to being a beacon of service for refugees.

StARS is led by refugees and women, which is unique among most refugee organizations. Christie Manisto, who along with Steven Saari accompanies the people of StARS as ELCA missionaries, said the philosophy of the organization is centered on the idea that “refugees don’t just deserve a seat at the table of change—forcibly displaced people own the table.

“In a world that continually devalues and stigmatizes those individuals who have been removed by force from their homes,” she added, “we stand in solidarity with StARS in its firm mission to heal, train and equip strong leaders who walk with dignity and skill, and to thoughtfully remind our U.S. ELCA partners just how effective the St. Andrew’s model has been these many years.”

At the Evangelical Theological Seminary in Cairo (ETSC), one doesn’t have to look hard for the presence of the ELCA. The seminary’s Center for Middle Eastern Christianity was built and sustained partially through financial support from the ELCA.

But this support goes far beyond physical infrastructure—the mission is one of mutual support and accompaniment.

“I have learned so much from our students,” said Cory Driver, an ELCA pastor who formerly served as director of graduate studies at ETSC. “Teaching ‘Exodus and Migration Studies’ in an Egyptian classroom filled with students from across North Africa and Southwest Asia is a mind-bending interpretive experience. Certainly, the students can relate to people living as a sometimes-vulnerable minority group in Egypt, but they are also Egyptians.

“As one student put it, ‘We are the heirs of Pharoah and the Israelites. We must preach to all people.’”

“Teaching ‘Exodus and Migration Studies’ in an Egyptian classroom filled with students from across North Africa and Southwest Asia is a mind-bending interpretive experience.”

Today ETSC, which was founded 160 years ago on a donated houseboat in the Nile, is growing rapidly. There were around 50 students 25 years ago—last year more than 500 students were enrolled.

As accompanying missionary professors, Driver said the emphasis in teaching must be supporting Indigenous interpreters and decolonizing theological education. European curricula, especially in the field of Hebrew Bible, have damaged centuries of interpretive practice in Egypt and divided pastors with Master of Divinity degrees from their less formally educated congregations.

The ELCA’s goal is to practice educational reparations and to make right the ways that uncontextualized European theory has foisted on Egyptian Protestant Christians.

“I urge my students to turn to their elders, especially their grandmothers, to blend what’s best about their traditions with what’s best about global biblical interpretations,” Driver said. “ETSC students have said that this formation and training ‘gave us back our Bible and helped us see our inheritance of Scripture.’”

Support for the ELCA’s global missionary programs in Cairo makes it possible for the church to be part of providing care, education and accompaniment for and with people from across the region. To learn more, visit elca.org/globalmission.

A new opportunity to live love

A circle of welcome