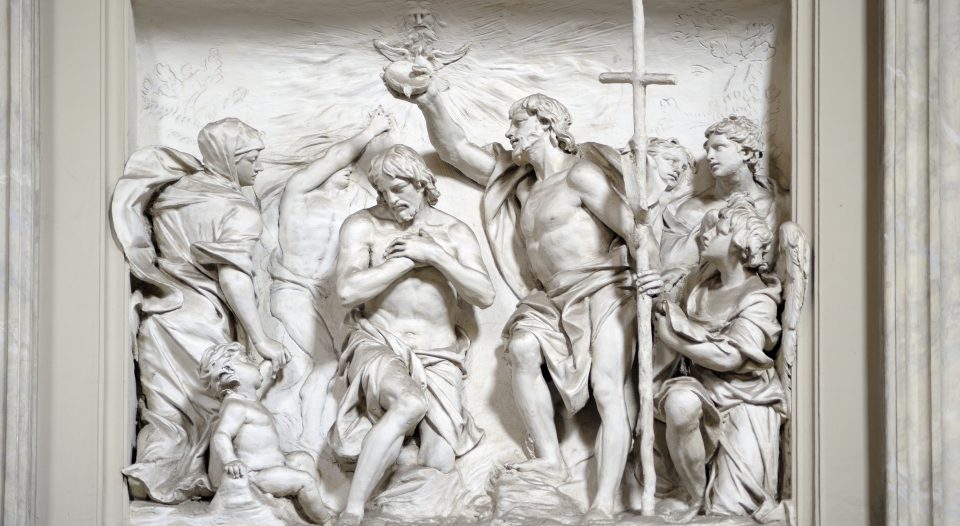 One of my favorite techniques of master storytellers or filmmakers is the epic callback. At the end of a book or movie, we are taken back to the beginning so we can understand in a new way what we have read or watched earlier on this journey with the characters and plot. Examples abound, but here’s one from my generation—Seinfeld. The sitcom began and ended with a pointless conversation about the position of shirt buttons, confirming to viewers that they had been watching “a show about nothing” but also showing how that “nothing” became funny material in the hands of gifted storytellers across nine years. It was a wink to the audience to remind them of the journey they had been on with the writers and actors.

In this week’s lectionary readings, we have one of my favorite callbacks, reminding the early Christian community—and us—about the journey that they/we have been on with Jesus.

On the day the Spirit fell upon Cornelius and his household (Acts 10:44), Peter told the story of Jesus. He spoke of Jesus going about, doing good and healing all who were oppressed by the devil, because God was with him (38). After many people witnessed Jesus’ good works and power, he was murdered and hung on a piece of wood. But he didn’t stay dead. Instead, he rose, to be witnessed by chosen people who ate and drank with him. Jesus ordered them to testify to others that he was the one whom God had chosen to be judge of the living and the dead. All the prophets testify that anyone who believes in him through his name receives forgiveness for sins. We know this and believe it.

But the way Peter started his summation of Jesus’ life, death and resurrection is important: He came to understand that God doesn’t show partiality, but in every nation the one who fears God and does what is right is acceptable (34-35). This is the message of peace that Jesus gave to the children of Israel that was then spread to the rest of the world (36)! Peter sought to confirm this message by reminding Cornelius of what he apparently already knew: Jesus started his ministry in Galilee after being baptized by John and then receiving the Spirit and power from God (37-38). Here, as the church expands to the gentile world (Samaritans and Ethiopians in Acts 8 should probably be understood as “part of the family”), Peter offers two of the greatest callbacks in Scripture.

The first callback is to Jesus’ baptism, which we read about this week in Matthew 3. Jesus was baptized by John, despite the prophet’s reluctance and insistence that it was Jesus who should baptize him. The Gospel is succinct: Jesus was baptized. The heavens opened. God’s Spirit came down. And God said, “This is my Son, the Beloved, with whom I am well pleased” (16-17). This baptism, in the Gospel of Matthew, is the beginning of everything else that Jesus does—and will do—and it is the beginning of God commissioning Jesus for his salvific ministry. At the inauguration of the welcome of gentiles to the church, Peter referenced the inauguration of Jesus’ ministry.

But Peter’s callbacks go even further. God’s love and desire for humans doesn’t change or suddenly occur to God after millennia of myopia. God has always loved the creation, including humans. Peter doesn’t say, “Now God is no longer showing partiality.” The change has been in Peter’s theology, not in God’s emotional life. Indeed, Peter is only calling back to the inclusion that God has wanted in the Beloved Community from the beginning.

Longtime readers know that I frequently reference Exodus 12:38 as one of the most important verses in the Bible: God welcomed a mixed multitude of people in the exodus. The covenant at Sinai wasn’t a monoethnic or monoracial event! The midrashic collection Exodus Rabbah emphasizes that God’s voice at Sinai divided into the 70 human languages of the earth so everyone present might understand it and have equal access (5:9). The prophets testify that God looks forward to the time when all people will stream to God to learn directly of God’s ways from the Holy One (Isaiah 2:2).

What Peter learned in his callbacks is what we all need to recover repeatedly: there can be no cultural or ethnic boundaries to the good news. God wishes to speak directly to the hearts of all, without boundaries or limitations. Jesus’ baptism was meant “to fulfill all righteousness” (Matthew 3:15). Peter draws a straight line from that baptism and reception of the Spirit to his new understanding that God is not interested in whatever limitations we might try to put on the church or the Spirit. God is out ahead, where God has always been, calling us to catch up with what the Spirit is doing.

Lectionary blog: It’s not what you think!

Lectionary blog: On being righteous

The waters of baptism