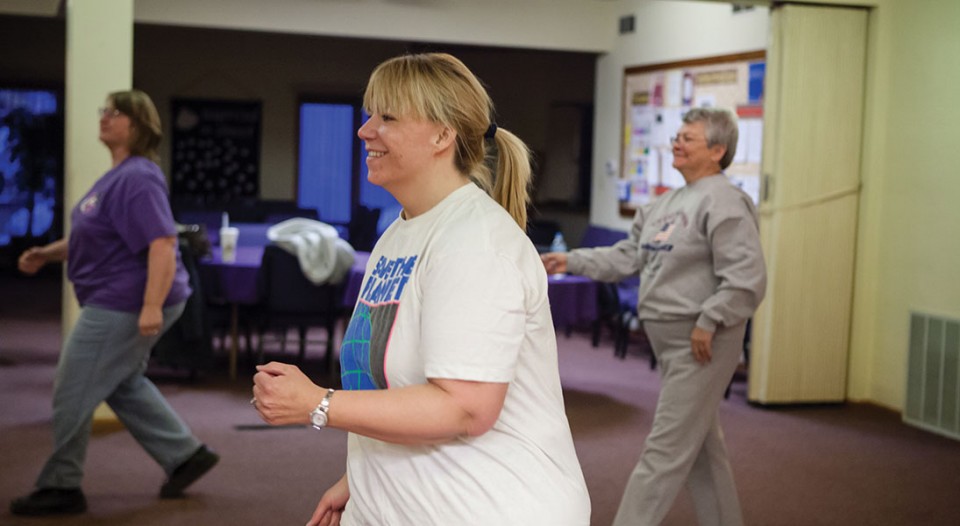 Patricia Decker, a pastor of Gloria Dei Lutheran, Cedar Rapids, Iowa, works out in a Zumba class that occurs weekly at the church. The class helps her and members stay on top of their fitness goals.

When asked what she did for fun outside of church, Karol Hendricks-McCracken, pastor of New Salem Lutheran Church, Turtle River, Minn., couldn’t answer.

“Well, teach confirmation,” was her response to the question from a health coach provided by Portico Benefit Services. According to the coach, teaching confirmation wasn’t an acceptable answer.

After taking the assessment in 2014, Hendricks-McCracken realized she and her husband needed to pay closer attention to their health. “We became very serious about it, and over about a year’s time we both lost 30 pounds,” she said.

So when the health coach asked about taking time for herself, Hendricks-McCracken realized that, although she was paying attention to her eating habits and exercise, she had ignored an important aspect of her health. She started making time to knit, which helped reduce stress.

“Keeping my stress level down means taking time for myself,” she said. “I have time to center myself. Before I was just running on adrenaline.” To address these health concerns, Portico launched the ELCA wellness reformation to invite ELCA rostered and lay employees to pursue healthier lifestyles in 2016.

Erika Uthe, pastor of St. John Lutheran Church, Ely, Iowa, suffers from an autoimmune disorder so staying healthy is a must. “I know that on Sunday mornings there will be sweets. I know that at annual meetings there will be a lot of casseroles filled with potatoes and cheese, so I choose to bring something green, like Brussels sprouts or kale salad, to introduce something new to the table,” she said.

In addition to bringing new items to the table, Uthe has learned how to remove things from her plate. The mother of two realized after the birth of her first child that she couldn’t do everything. By relying more on her congregation, Uthe discovered that she could achieve more balance in her life.

“I really think of it as taking something off my plate for the sake of the greater mission. By making room for other people to use their strengths, we’re all healthier and better,” Uthe said.

“There is a high level of stress that our leaders are carrying,” said Tammy Devine, ELCA wellness manager. “There’s also the sense that their schedules don’t allow them the opportunity for the amount of lifestyle changes or good choices they would like.”

Devine encourages clergy to focus on their God-given strengths and gifts instead of feeling responsible to lead every project or task in a congregation. “We, as leaders, are to mentor and model a life that is different from society, to be countercultural,” she said.

Nine years ago Stephen Talmage, bishop of the Grand Canyon Synod, was shocked to learn he needed quadruple bypass surgery. Realizing that stress was a major factor affecting his health, Talmage vowed after his surgery to alter his lifestyle.

“That really began my journey trying to maintain a healthier lifestyle in the midst of a job that is very unhealthy,” he said. “The life of a bishop is just not healthy because you are constantly responding to high stress environments.”

Although he continues to travel a lot, Talmage sets aside time every day for cardio exercise and does his best to eat right and get more sleep.

In the synod’s January e-newsletter, Talmage wrote about his health journey, sharing how he sees himself as a witness to synod pastors and lay leaders. “One, they know I had a health crisis. Two, the majority of them know they’re not as healthy as they should be. If they see that I can own my own struggle and take responsibility for it, and not in a self-righteous way but in an honest way, then I believe and I hope that it is an encouragement to other rostered leaders to steward their own bodies,” he said.

Patricia Decker, a pastor of Gloria Dei Lutheran Church, Cedar Rapids, Iowa, struggled with her weight most of her life. Several years ago she decided to confront it once and for all and lost 71 pounds. Her congregation has been supportive and many members have been inspired to make changes in their lives.

A weekly Zumba class at the church helps Decker and other members keep on top of their health goals.

Decker also takes her own food to church events. “It’s so much easier because it’s about being at the church with people and being part of the fellowship. I’m not there to eat, I’m there to be with people,” she said.

Portico’s Go! Challenge provides resources for congregations to help support their leaders as they work toward a healthier, more balanced lifestyle (visit the “Call to Live Well” section at porticobenefits.org).

“It’s been exciting to see that leaders across the country are talking more publicly about the importance of healthy living,” said Jeff Thiemann, Portico president and CEO. “They’re making healthy changes and they’re sharing the journey with those they lead.”

Pastors embrace call to live healthier lives
The data is in, and it’s not looking good for our denomination’s rostered leaders—pastors who serve as ministers of word and sacrament and lay leaders who serve as ministers of word and service (associates in ministry, diaconal ministers, deaconesses). On the whole those who serve our churches are less healthy than the general public, which itself is struggling with some of the world’s highest obesity levels. Fortunately, we can do something to help us all get healthy.
Download Now