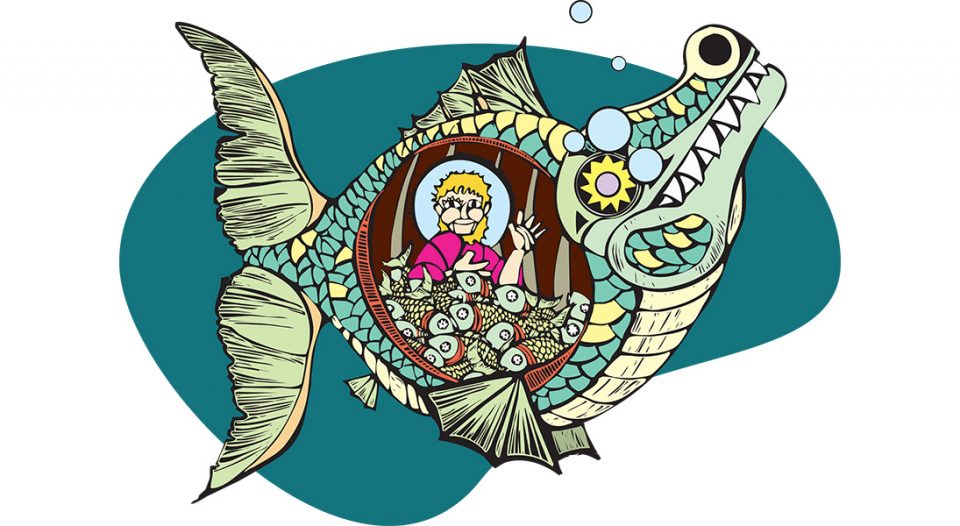 The book of Jonah takes up exactly two pages in my Bible. But as with many parts of God’s word, just a little bit can alter the course of a life.

About six years ago, our then 3-year-old son fell in love with the story of Jonah in the Rhyme Bible. He begged us to read it every night. He chanted along with the words. He cheered when Jonah stops saying “no” and finally agrees to “go.” Each night we went through the drama of Jonah’s decision-making, not realizing that we were only getting the story of the first chapter.

Around that time, a dream my husband, Eric, and I had long shared was about to come true. I was bitten by the travel bug growing up. Then I met Eric. We became fast friends and kept in touch as we each studied abroad. Once we were on the same continent, we decided to connect our futures and dreamed of becoming overseas missionaries. “Someday,” we thought, “we’ll raise our kids in a different culture and land!”

But first, seminary. Then graduate school. And then putting down roots in a wonderful congregation. So much good work to do in such a lovely place. We thought our dreams had already come true.

And then—the story of Jonah. And a glance at the ELCA’s overseas postings. And an invitation to come serve at a newly formed Lutheran study center in the far-off city of Kota Kinabalu, on the jungle island of Borneo. And every night, as we talked and prayed and wondered what God might be telling us, our toddler was making it clear: “Read Jonah again. Go, go, go!”

You know the first chapter of Jonah: God calls him, he sails in the opposite direction, and after three days in the belly of a great fish, he agrees to do God’s will.

The end of the second chapter is Jonah finally saying “yes.” We, too, finally said “yes.” We downsized, gave away our winter clothes, and went to the airport with only two bags each to start a new life.

“Now Ninevah was an exceedingly large city, a three days’ walk across. Jonah began to go out into the city, going a day’s walk. And he cried out: ‘Forty days more, and Ninevah shall be overthrown!’ And the people of Nineveh believed God; they proclaimed a fast, and everyone, great and small, put on sackcloth” (Jonah 3:3-5).

There are two key points here that I had never noticed before my own call to “go.” One: Jonah was probably heading for the center of the city—the palace, temples and crowds. He didn’t get there. As soon as he opened his mouth, his words evoked enormous reactions! Only one day’s walk into the city and hearts were already open. But it wasn’t about Jonah—it was about God’s searching love and about the people who were desperate to receive God’s word.

The second point is that the text doesn’t say the people believed Jonah. It says they believed God. Jonah’s role was adventurous and dramatic, but he was an instrument in a plan he did not concoct, with a mission he did not understand, and a goal that he did not reach. What did happen was that Jonah spoke, and while the people needed his part of the story, it was God they connected with.

Wondering at the outcome

The third chapter mirrors the experience I have heard from many missionaries: We go to be part of plans formed by local churches—not to bring our external authority, but to support the global church as best we can. We arrive to find that God has already been at work and that people are ready to teach us what kind of partnership they most need. Often our plans have to change, and we find ourselves asking, “What does obedience to God’s will look like here?”

We try to figure out the balancing act of sharing our resources generously while recognizing that we want people not to honor us, but to connect to God. We want to, together, believe God and see what that means for our decisions. Ultimately, this is true for missionaries and for all Christians: You may cross an ocean or cross a street—in either place, God has been at work before you, and God’s people and creation need you to both speak and listen.

“What does obedience to God’s will look like here?”

The fourth chapter is a hilarious and humbling passage. Jonah throws a temper tantrum because God had promised to destroy Ninevah but was ultimately merciful.

Jonah’s journey of obedience continues, as does ours. It’s not easy to give up our ideas of how things should go. We moved abroad with young kids—believe me, we’ve seen tantrums caused by life being unexpected. We adults can have our own tantrums when the identities that we cling to trip us up. Our story continues to mirror Jonah’s, as we go through avoiding, deciding, ministering and wondering at the outcome.

In the end, we continue to learn that ministry isn’t about us. It’s God’s work, and it’s a joy when we get to join in. In our family, it’s now a treasured memory that a toddler demanding a bedtime story could be the voice of the Spirit, opening us up to serve God and be blessed along the way.