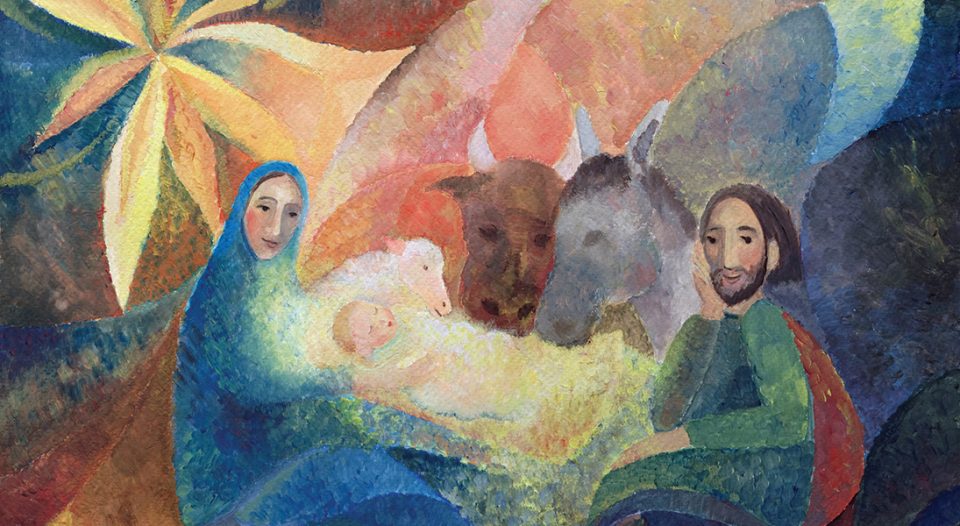 On Dec. 25, Western Christians celebrate the birth of Jesus. Christmas is a festival of the incarnation, a theological word that means “becoming flesh.” John 1:14 proclaims: “The Word became flesh and lived among us.”

The mystery of the incarnation is that God the Son, who together with the Father and the Spirit has existed eternally, became truly human. In the Nicene Creed, we profess that Jesus Christ is “God from God, Light from Light, true God from true God, begotten, not made.” Jesus wasn’t simply a prophet, a good man or wise teacher. He is God the Son, who descended deep into flesh, deep into the darkness of Mary’s womb, into the mystery of blood and flesh and human life. The angel told Joseph that Mary’s son would be called “Emmanuel,” which means “God is with us” (Matthew 1:23).

In the Gospel of Luke, the angel Gabriel appeared to Mary, telling her she would have a son, conceived differently from how children are normally conceived. The Spirit, the power of the Most High, would cause this to happen (Luke 1:35). While the Gospel doesn’t provide further details, the church has sometimes envisioned the incarnation as the Spirit (often painted as a dove) descending and hovering over the Virgin Mary, causing God the Son to take on flesh and become human. We might also find parallels with Genesis, where the Spirit hovered over the waters of creation (Genesis 1:1-2).

Hymns, artwork and folk customs influence and enhance our celebration of Christmas. At their best, they invite us to envision ourselves as part of the story, affirming that the Christ child was born for us.
At their worst, they can perpetuate pious stereotypes of Jesus as an ideally behaved baby who didn’t embody the full human characteristics of newborn infants: “But little Lord Jesus, no crying he makes” (“Away in a Manger”). Manger scenes often include a cow and donkey in the stable with Mary, Joseph and the baby. Luke 2:7 says baby Jesus was placed in a manger (a feeding trough). Luke’s Christmas story mentions no animals, though they could have been present. The idea of a donkey and cow near the manger comes from Isaiah 1:3: “The ox knows its owner and the donkey its master’s crib.” This tradition expresses the profound idea that creation recognizes its Creator, now present as an infant child.

We sometimes hear people assert that the date for Christmas came from a “pagan” (pre-Christian) sun festival associated with the winter solstice (Dec. 21 or 22), the time of year when the Northern Hemisphere experiences the longest night. Christians may have adopted and adapted some of the customs associated with this already popular festival, as increasing numbers of solstice-celebrators converted to Christianity. However, it’s also likely that the date for Christmas was chosen to correlate with the date of Jesus’ crucifixion.

Many fourth-century Christians believed that March 25 was the date of Jesus’ crucifixion. (Since the exact year of his crucifixion, probably between A.D. 29 and 33, is uncertain, we don’t know the actual date of his death.) Ancient Christians believed it was fitting that Christ would die on the anniversary or “birthday” of his incarnation. With March 25 as the Feast of the Annunciation, commemorating the angel Gabriel’s appearance to Mary and the announcement that God had chosen her as the mother of Jesus (Luke 1:26-38), Christians then counted forward exactly nine months, concluding that Dec. 25 was the date of Jesus’ birth.

Thus, the joyous mystery of the incarnation is coupled with a mystery more somber: that Jesus, this God-become-flesh, would feel pain and bear suffering in his body. He would be broken, as so many humans are broken, by violence, hatred, mockery, betrayal and abandonment. The joyful mystery of Jesus’ birth is closely paired with the sorrowful mystery of crucifixion.

Thus, the joyous mystery of the incarnation is coupled with a mystery more somber: that Jesus, this God-become-flesh, would feel pain and bear suffering in his body. He would be broken, as so many humans are broken, by violence, hatred, mockery, betrayal and abandonment. The joyful mystery of Jesus’ birth is closely paired with the sorrowful mystery of crucifixion.

The Christmas hymn “What Child is This” announces: “Nails, spear shall pierce him through.” We are reminded of Christ’s suffering, crucifixion and resurrection whenever we celebrate communion at Christmas services. In fact, the name “Christmas” comes from “Christ-mass.” On the night before his crucifixion, Jesus broke bread and told his disciples, “This is my body, which is given for you” (Luke 22:19). Christ’s body, born of Mary for us, is now given for us in the communion meal.

This baby in the manger is the light of the world and the source of our hope. God the Son, who existed from eternity, was born among us and lived as one among us. The candlelight, decorated trees, manger scene and carols of our Christmas celebrations all invite us to ponder the mystery of the Word made flesh.

Minister of word and service: Deacon