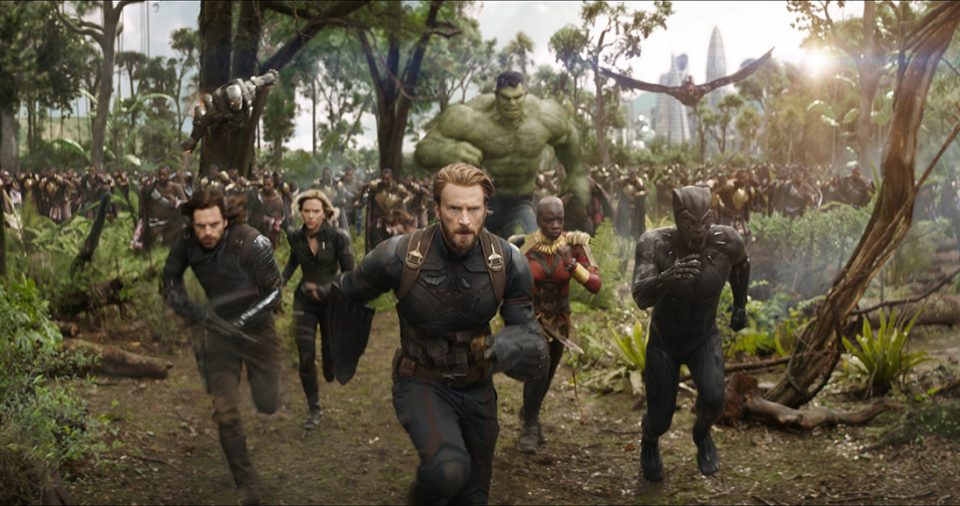 In a favorite moment of 2012’s The Avengers, supervillain Loki taunts the Hulk by bellowing, “You are, all of you, beneath me!” But just as Loki declares, “I am a god, you dull creature, and I will not be bullied,” Hulk grabs Loki’s leg and repeatedly slams him to the ground, sneering, “Puny god.”

The scene always gets a laugh, and not just for its humor. We’re relieved to see Loki brought low, because he didn’t seem so puny leading an alien armada into New York City.

Why did a heretofore terrifying villain become Hulk fodder? Because he took on a team.

Up to that point, the Avengers had each fought formidable foes in their own individual Marvel Studios films, and they’d attempted to stop this new attack on their own terms. But they’d been less a team and more a collection of superstars; until they overcame their egos and relied on each other, the Avengers failed to do good.

This transition from lone operators to team players drives all the Avengers movies. Whether subduing Iron Man’s evil invention Ultron or dealing with Captain America’s wayward partner (or, now, re-forming again against Thanos in the new Avengers: Infinity War), the individual Avengers must learn to support one another and to clean up each other’s messes. Behind the quips and special effects, the films share a central message: Sometimes you need other people—even people you don’t like. Get over yourself and save the day.

It’s a theme simple enough for a Hollywood blockbuster but difficult to practice. American Christians often consider faith a personal endeavor, to be worked out in fear and trembling and solitude. Such prideful thinking reveals not only a fear of being exposed but also a fear of exposure to others. We don’t want to deal with our neighbors’ problems, so we insist, “My sins are between me and God, and your sins should be, too. Don’t bother me with them.”

Forgiveness cannot be practiced in isolation, nor can it be done without recognizing the grace we’ve all received.

Christians have long struggled with this attitude, as indicated by Galatians 6. Writing to a church fractured by Jewish and Gentile values, Paul instructs believers to stay together. “If anyone is caught in a sin,” he tells them, “you who live by the spirit should restore that person gently,” while also warning them to “watch yourselves” because “you also may be tempted.” This directive makes clear that Christians should address fellow believers’ sins, but it does not allow for abandonment. Even when teaching readers to “test their own actions” and to “each one carry their own load,” Paul begins by commanding, “Carry each other’s burdens, and in this way you will fulfill the law of Christ.”

In The Cost of Discipleship, Dietrich Bonhoeffer clarified this knotty passage by defining the “the law of Christ” as a demand for grace. Christian community involves not only bearing a fellow Christian’s “outward lot, his natural characteristics and sin, but quite literally his sin,” which can only be done “by forgiving it in the power of the cross of Christ in which I now share.” To act as a Christian, Bonhoeffer claims, is “to follow Christ” by sharing in “the work of forgiving men their sins.”

Such forgiveness cannot be practiced in isolation, nor can it be done without recognizing the grace we’ve all received. The law of Christ binds us together in our weakness and in the mercy that covers it, whether we want it or not.

Thus, the good done by Christians is precisely this process of failing and forgiving one another. It may not always be fun, and it’s rarely as exciting as battling a supervillain, but it is more necessary and real.