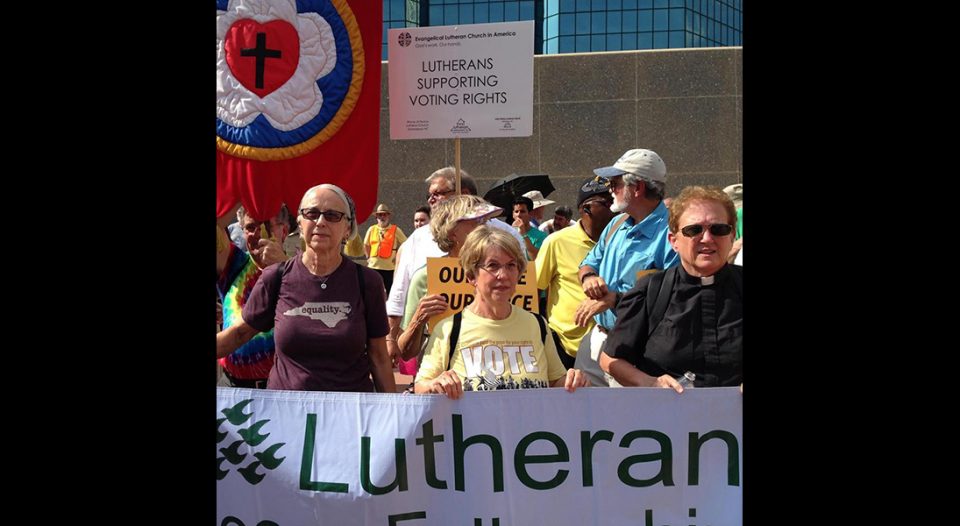 LPF members have marched and taken action with the Moral Monday movement in Raleigh, N.C., since 2013.

Editor’s note: With global migration on the rise and cultural polarization increasing, there is a pressing need for peace among neighbors and nations. In our series “Lutheran legacy of peacemaking,” we’re exploring Lutheran contributions to the Christian tradition of peacemaking. The series will culminate in the September issue in conjunction with the International Day of Peace (Sept. 21).

“Here is my servant, whom I uphold, my chosen one in whom my soul delights; I have put my spirit upon him; he will bring forth justice to the nations” (Isaiah 42:1).

These verses, a small sampling of the many passages throughout the Hebrew Bible and New Testament that address peace and justice, are a central component of what drives the mission of the Lutheran Peace Fellowship (LPF).

“The actual word Jesus and the apostles used is much more than the word ‘peace’ as we know it today. It includes our ideas of wholeness and community,” said Glen Gersmehl, national coordinator of the LPF. “Peacemaking is more than just stopping people from fighting.”

The LPF’s mission is “to bring Lutherans together to engage peace and justice concerns and to offer nonviolent options to violence, war, injustice and their causes—from global conflict and violence against women to climate change.”

“People don’t realize how many parts of the Bible challenge us and call us to be peacemakers in the world,” Gersmehl said. “We need to have goals and challenges to be part of making change in our world—not only on the large stage but person-to-person in a church and community level.”

Founded in 1941, the LPF provides the resources for both approaches through its many programs and initiatives. In addition to providing such resources for hundreds of ELCA congregations, the LPF also plays a role in national and international peace and justice advocacy efforts.

“Peacemaking is more than just stopping people from fighting.”

LPF officials were heavily involved in the United States’ participation in the 1997 Chemical Weapons Convention, which led to the banning and destruction of chemical weapons worldwide. In 1996, LPS gathered more signatures than any other organization in the country for an international campaign to ban land mines. That campaign received the Nobel Peace Prize in 1997.

“Share the power of what our faith challenges us to do”

While these actions have helped secure peace around the world by limiting access to violent means, Gersmehl insists the work of peacemakers goes beyond keeping people from having weapons.

“It’s about asking questions of how to deal with the causes of conflict in the world,” he said. “We’ve found the countries that spend a great deal of money on military [budgets] are also the ones that use their military muscle. Instead, we should be looking for ways to reach a common ground.”

The LPF also works to bring about peace and justice in contexts outside of traditional violent conflict. One of its largest outreach programs is the struggle against global hunger and poverty. It is working with congressional staffers and other stakeholders in Washington, D.C., on the 2018 farm bill. Part of the recent political debate has been about whether to make drastic cuts and other changes to the Supplemental Nutrition Assistance Program (SNAP), formerly known as food stamps.

“The idea that we need to cut back on food stamps is preposterous and truly cruel,” Gersmehl said. “To see the levels of hunger and poverty worldwide, and in our own cities, is truly heartbreaking.”

In addition to reducing hunger, curtailing international conflict and Christian peacemaking, the LPF’s fourth core value is family and community peacemaking, including violence against women. There are currently nearly a dozen major initiatives on the topic, including resources sent to congregations, made available on the LPF website and Facebook page.

While the LPF is a broad, far-reaching association, Gersmehl wants all Lutherans to know that every effort starts with the words each of us can find in Scripture. “One person can make a difference in bringing peace to this world.” Gersmehl said. “The first thing to do is tap into the excitement we have uncovered and share the power of what our faith challenges us to do.”

The next step for Lutherans is to act on that challenge, he said. “Understand you are part of a larger group that is determining which issues are worth addressing and moving forward with those in the real world.”

“We pray for the peace from above”

Peace and freedom of religion