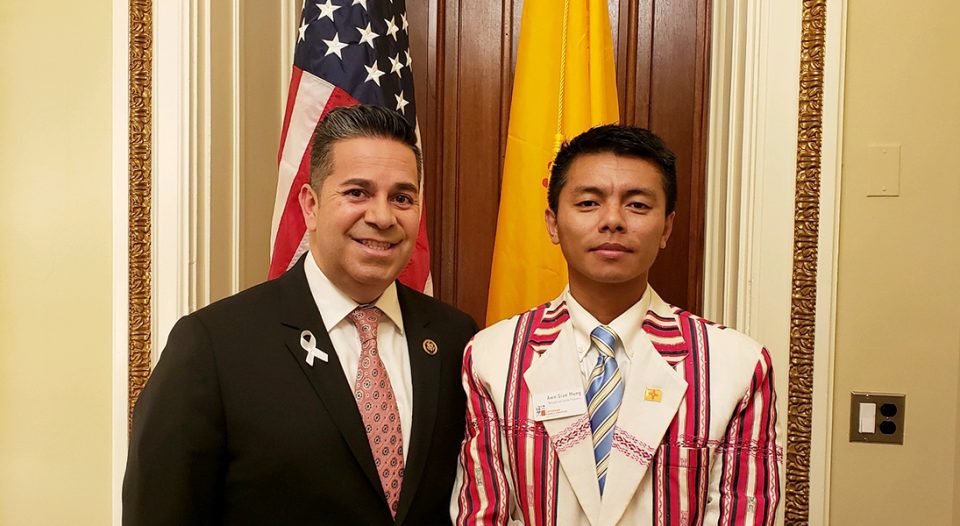 Awn Sian Mung (right), a refugee who fled Myanmar in 2006 and now works for Lutheran Family Services Rocky Mountains, was invited to the State of the Union this month as a guest of U.S. Rep. Ben Ray Luján (left).

In 2006, when Zomi ethnic minority Awn Sian Mung (known as Mungsan) was targeted for his religious and political views, put into a labor camp in Myanmar, then forced to flee to Malaysia, he could have never imagined that 13 years later he’d be a special guest at the State of the Union address. But that’s exactly where he found himself Feb. 5.

Mungsan, lead case manager for Lutheran Family Services Rocky Mountains, a partner of Lutheran Immigration and Refugee Service (LIRS), was invited by U.S. Rep. Ben Ray Luján, D-N.M., to attend the address. “Mungsan is an example of the promise of a better life in the U.S. and what can be achieved when we open our doors to others,” Luján wrote in announcing his guest.

Mungsan’s commitment to helping other refugees earned him that invitation. After fleeing from Myanmar, he found himself alone in Malaysia, where took a job at a restaurant and saved every penny to pay back his smugglers.

“Through friends, I found out a UNHCR (United Nations High Commissioner for Refugees) in Kuala Lumpur through my community. I got an appointment and interview,” he said. But that didn’t ensure a swift flight to the U.S.—his case took five years to process. Mungsan got the green light two days before he left, arriving in Colorado in 2011 knowing no one.

“The day after I arrived, by myself with no friends, I said, ‘What am I thinking? What am I going to do now?’ ” Mungsan recalled. Soon after, Lutheran Family Services (LFS) in Colorado Springs connected with him. As Mungsan wrote in a reflection for LIRS: “I will never forget the welcome I received … the people who gave me a hug when I first got here.” That feeling of welcome turned into a calling to offer the same to other refugees, and Mungsan asked the resettlement organization that if they ever had an opening, he’d like to work for them. Today he serves in LFS’ Albuquerque, N.M., office.

“I am so proud of myself. I don’t know—there’s no better words from my mouth,” he said. “Now I’ve become one of the persons through this agency providing services, which I got before. I’m not a refugee anymore. I’m a provider.”

“Now I’ve become one of the persons through this agency providing services, which I got before. I’m not a refugee anymore. I’m a provider.”

It was from that vantage point that Mungsan listened to the State of the Union address this year. In his speech, Trump said, “This is a moral issue. The lawless state of our southern border is a threat to the safety, security and financial well-being of all America. We have a moral duty to create an immigration system that protects the lives and jobs of our citizens. This includes our obligation to the millions of immigrants living here today, who followed the rules and respected our laws.”

In a statement following the State of the Union, Michael Rinehart, LIRS board chair and bishop of the Texas-Louisiana Gulf Coast Synod, said, “In the president’s own words, immigrants enrich our nation and strengthen our society in countless ways. LIRS will continue to stand by our faith and offer protection and welcome to those seeking refuge on our shores and at our borders.”

Mungsan, who is aware that, according to the U.N. Refugee Agency, there are more than 68 million displaced people around the globe, said his greatest wish is to see refugee numbers increase from the current limit of 30,000 in America.

Kinsey Gidick
Kinsey Gidick is a freelance writer based in Charleston, S.C. When not writing, she spends her time searching the Lowcountry for great meals and visiting historic sites with her husband and 3-year-old son.

Seeing Jesus in the face of the other