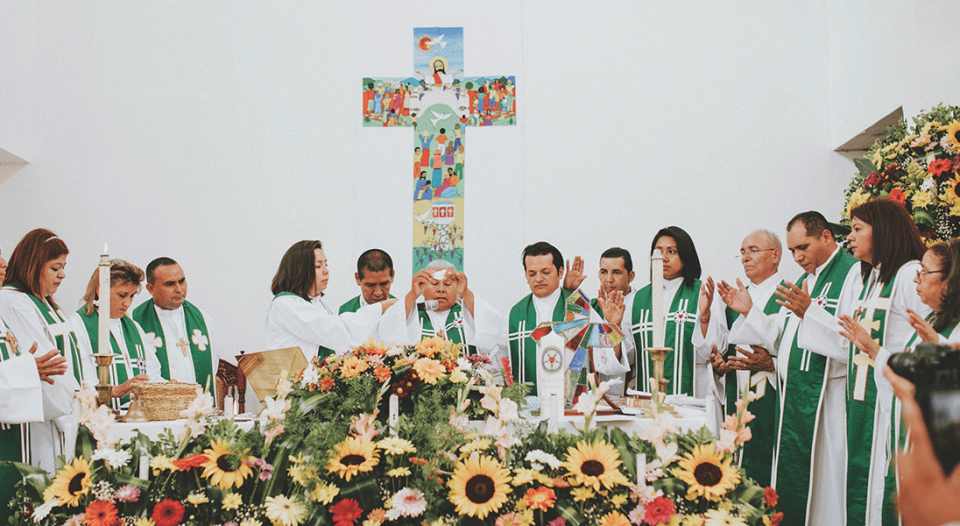 The 14 new pastors gather at the altar after their ordination.

On Aug. 5, while the 2019 ELCA Churchwide Assembly met to elect leaders and make decisions regarding the future, Salvadoran Lutherans gathered for a similar reason. For them, the day was historic: the Salvadoran Lutheran Church (SLS in Spanish) ordained 14 pastors, increasing its roster from 35 to 49.

“Never in our [47-year] history has there been such a large group of ordinations,” said Medardo Gómez Soto, SLC bishop.

This new class of leaders reflects an exciting trend across the Salvadoran church—its 55 congregations are growing. And Gómez Soto is hopeful for the church’s future.

Hope can be hard to find in a country where violence and poverty propel citizens to migrate daily. But Gómez Soto believes the SLC is seeing a boost in leaders and members due to its long-standing commitment to social justice and public witness. “God has enlightened us as a church to respond to key moments in Salvadoran history, to be part of our country’s history,” he said. “That is how we’ve grown. Guided by that same vision, these new pastors will keep our church growing.”

Carrillo’s parents were shot and killed at the entrance of their church, just minutes after concluding weekly worship.

Living Lutheran spoke with three of these pastors about their journeys to ministry.

Pursuing college education is a formidable challenge for most Salvadoran youth. In the case of Wuilver Carrillo, that challenge was compounded by family tragedy.

As a teenager, Carrillo felt called to follow in the footsteps of his parents, Lutheran pastors serving a two-point parish in Jayaque, El Salvador. But his studies at the Salvadoran Lutheran University were interrupted Nov. 4, 2006, when his parents were shot and killed at the church entrance, just minutes after concluding weekly worship. It wasn’t until 2014 that he resumed his studies on a part-time basis. In 2018, he completed his theology degree.

Along with Carrillo, the 13 other new pastors participated in this theological-pastoral education. The training is critical in developing a candidate’s understanding of Lutheran theology and practices.

“A university awards them an academic degree in theology,” Gómez Soto said. “Here in the [church’s] program, we prepare them to be Lutheran pastors.”

Not all the recently ordained pastors entered ministry with theology degrees. SLC leaders recognized that pastoral experience is just as valuable as theological training, given the challenges of parish ministry in a national context of poverty and violence.

“Some of our best lay leaders don’t have the luxury of studying theology for five years in a university,” said Vilma RodrÍguez, a pastor and director of the SLC’s theological-pastoral education program. “But they have faithfully served in the [church] for 15 years or more in non-ordained ministry roles—as catechists, evangelists or deacon pastors.”

From lay leaders to pastors

“In Latin America, ours is one of the first Lutheran churches to give due recognition to lay leaders,” he said. “They have been blessed with God-given abilities. Some are really humble people with little formal education. We were criticized for this practice, but we persisted.”

Margarita Moreno, 61, is one such example. Her service in the SLC began in the middle of the Salvadoran Civil War (1980-1992). During that time, Lutheran church workers, including the bishop, were persecuted for ministering to war victims.

“I started as a Sunday school teacher, then worked as a trained health promoter,” she said. “After the war ended, the [church] began offering continuing education and training for its catechists and evangelists. I signed up.”

Leaders noticed Moreno’s gifts for ministry and installed her as a deacon pastor of the Espiritu de Paz (Spirit of Peace) congregation in Tepeagua, where she’s served for over a decade. As of August, after completing Presbiterio por Madurez, she is now the pastor there.

Moreno, in turn, has gone on to mentor more lay leaders. “I’ve already prepared three youth to serve as Sunday school teachers,” she said. “Now I’m motivating other church members to prepare themselves as catechists and evangelists.”

Three years ago, Carrillo decided to reopen and rebuild the church where his parents were martyred.

Like Moreno, Ivomne Turcios, 59, served in different SLC ministries in San Salvador during the war. She worked with victims, distributed humanitarian aid, and served children and adults at the Fe y Esperanza (Faith and Hope) refugee camp.

Prior to becoming ordained, Turcios served on a congregation council and worked with a team that gives pastoral care to trauma victims; she continues this ministry today. Presbiterio por Madurez provided her training after years of faithful service.

Her commitment to the church stems from a childhood steeped in ministry. Turcios’ parents were founding members of the first Lutheran congregation in Pasaquina. “The truth is,” Turcios said, “I’ve lived the church all my life.”

The same could be said for Carrillo, who has chosen to continue ministry in the parish his parents once served. Three years ago, in conversation with Gómez Soto, he decided to reopen and rebuild the church where his parents were martyred.

“[The bishop] asked if I would feel safe serving in that congregation, not only because of what happened to my parents, but also because the church is located in a gang-controlled area,” he said. “It hasn’t been easy. I’ve done a lot of visiting and gradually the people are returning.”

As these ordained leaders nurture the growth of the SLC, they remained buoyed in the hope by God’s word and by a commitment to loving their neighbors.