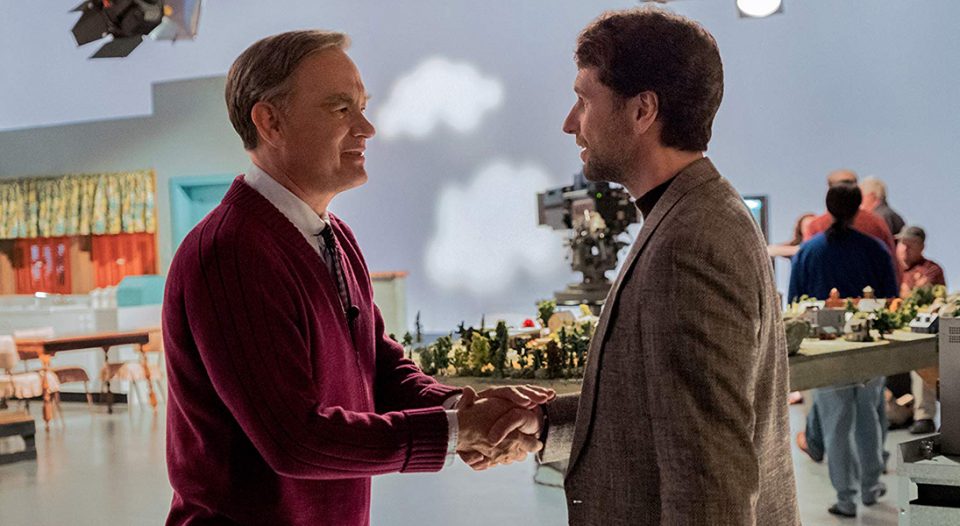 When Lloyd Vogel (Matthew Rhys), the Esquire magazine reporter who serves as protagonist and audience surrogate in the new drama A Beautiful Day in the Neighborhood, meets Joanne Rogers (Maryann Plunkett), wife of the children’s show host and Presbyterian minister Fred Rogers, he asks the question we’d all be thinking: “What’s it like being married to a saint?”

After a short pause, Joanne corrects Lloyd’s assumption. “If you call him a saint, then what he does is somehow unattainable,” she explains. “He works hard at it. It’s a practice.”

Throughout the film, director Marielle Heller showcases many of Rogers’ practices, from swimming laps to praying for people by name. Heller’s visual style also captures aspects of these practices, most strikingly in a framing narrative that re-creates an episode of the iconic Mister Rogers’ Neighborhood, right down to the grainy video footage.

But the most important practice is Rogers’ devotion to silence. Dampening the easy charisma that has made him “America’s Dad,” Tom Hanks slows down to play the beloved Mister Rogers, speaking softly and leaving gaps between his words. To Heller’s credit, she resists the urge to fill these gaps, even when it’s unsettling to watch Fred sit and listen.

It’s unsettling because we so rarely see people act like Mister Rogers. Silence is hard. Internal and external messages bombard us, telling us we’re not good enough or we’ve been too damaged. Naturally, we want to shout back, to combat noise with noise and busyness with busyness.

In silence, Mister Rogers heard the voice of God telling him to love people just the way they are.

Psalm 46:10 implores us to “be still” and know that God is God, and the Gospels contain numerous instances of Jesus escaping to solitary places, but we feel the temptation to fill even our worship services with noise. The ELCA Worship Formation and Liturgical Resources guide on silence in worship reminds us that silence is “a gift that can enrich the life of a worshipping community” and teaches us that “prayer is not only a conversation involving words, but is also a stance of openness and listening for the voice of God.”

In silence, Mister Rogers heard the voice of God telling him to love people just the way they are, something the movie vividly illustrates in a scene set at a bustling diner (and adapted from this public moment). After listening to Lloyd call himself a “broken person,” Fred waits and responds, “I don’t think you’re broken.” To help Lloyd see his worth, Fred invites him into the practice by asking, “Would you take a minute of silence, to think of the people who loved you into being?”

Lloyd quickly becomes as quiet as Fred, but we can still hear others eating and talking. Heller cuts to these other diners, but as the camera pans back to Lloyd and Fred, each person, one by one, falls silent. For a full minute, there’s no music, no talking, no sound except for the fluttering of birds outside the window. As Lloyd and Fred sit and remember all the people special to them, the screen fills with images of others doing the same. And just as the minute is ending, we see Fred Rogers, looking directly at the camera, looking out at us all, silently telling us that we’re special.

Most of us have trouble enough finding words to tell others how much they matter, but A Beautiful Day in the Neighborhood demonstrates that it can even be done speechlessly. With a little practice, we too can find the power and beauty of silence. And in that quiet, we just might hear God—speaking once again through Mister Rogers—say, “I knew you could do it.”