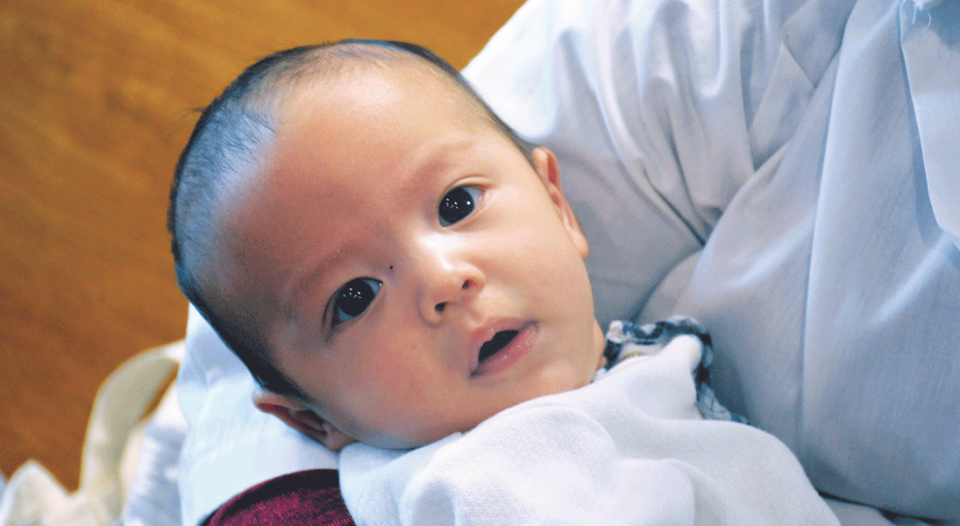 In 2016, the writer’s grandson Peter played the role of baby Jesus in the congregation’s Christmas pageant at Christ Lutheran in Oreland, Pa.

When I took my church job in 2002, I was tasked with organizing the annual Christmas Eve family service and pageant. I’m a trained actor and have directed productions, so this part of my new position was right up my alley. Traditionally, the pageant cast skewed quite young—the head angel and Holy Family were played by middle schoolers, with a pink plastic doll as Jesus.

That formula had worked for years before my arrival, but it seemed too dull and predictable to me. I also felt strongly about emphasizing Jesus’ humanity. Using an inanimate object seemed to detract from the meaning of the Christmas story we were telling. Yet, I knew changing things would mean bucking the congregation’s Christmas Eve status quo. I decided to take a chance and add an element of surprise: a real baby. A possibly fussy, possibly dirty-diapered baby. What could go wrong?

As it turned out, nothing has gone really wrong in the past 17 years. In my view, it’s all gone right. Now that doesn’t mean our Jesuses have never cried, almost tipped over the cradle or kicked off the blankets. And our young Marys and Josephs have looked plenty stressed as they’ve attempted (often in vain) to quiet the babies with pacifiers and toys. One year all the photos show the Christ child waving a church bulletin in the air—the only thing that calmed her down.

But the pageant has felt much more authentic. I can’t believe the original nativity scene could have been full of silent peace and harmony, not in that cramped, smelly stable on a cold Middle Eastern night. I believe God chose to enter into humanity completely, messy as that humanity might be.

Our pageant babes don’t resemble one another either. Over the years, our Jesus has been African American, half-Taiwanese, male, female, 4 weeks old and 4 months old. And while we’re an ELCA congregation, I cast a wide net in my annual search for our little Savior. We’ve welcomed quite a few small Catholics into the pageant, and I have no qualms about presenting Jesus from a variety of faith traditions.

I believe God chose to enter into humanity completely, messy as that humanity might be.

Our congregation, to my delight, adjusted to the pageant change quickly and has wholeheartedly welcomed each and every baby as a more-than-acceptable stand-in for the Holy Infant.

What does God look like? Our answer: God looks like any of us—and all of us—whatever our gender, race or nationality.

I used to be frustrated by the Bible’s silence about Jesus’ childhood, but I’ve come to think that maybe it’s because there was nothing remarkable to write about. Perhaps, like our Christmas Eve children, Jesus was an ordinary kid. His playing with friends and helping around the house and, yes, sassing his folks from time to time wouldn’t have made for riveting reading.

The Gospel authors had an urgent message to share, centering on Jesus’ three years of ministry with his teaching, healing and miracles, and culminating with his death and resurrection. They needed to emphasize the divinity of our Lord to an audience that included skeptics, and adding accounts of normal childhood antics might not have served their efforts.

Today, Christians accept Jesus as God, the Word made flesh, but maybe it doesn’t hurt to be reminded that the Son of Man probably also threw tantrums and spit up. And maybe by seeing baby Jesus portrayed by so many different infants from year to year, our congregation better understands the universality intended by God—a God who came to earth to be one of us, no matter what we look and sound like, and who came to save us all.

Elise Seyfried
Elise Seyfried is a freelance writer whose work has been published in The Philadelphia Inquirer, Guideposts and many other publications. She is author of three books of humorous spiritual essays and director of spiritual formation for an ELCA congregation in Oreland, Pa.