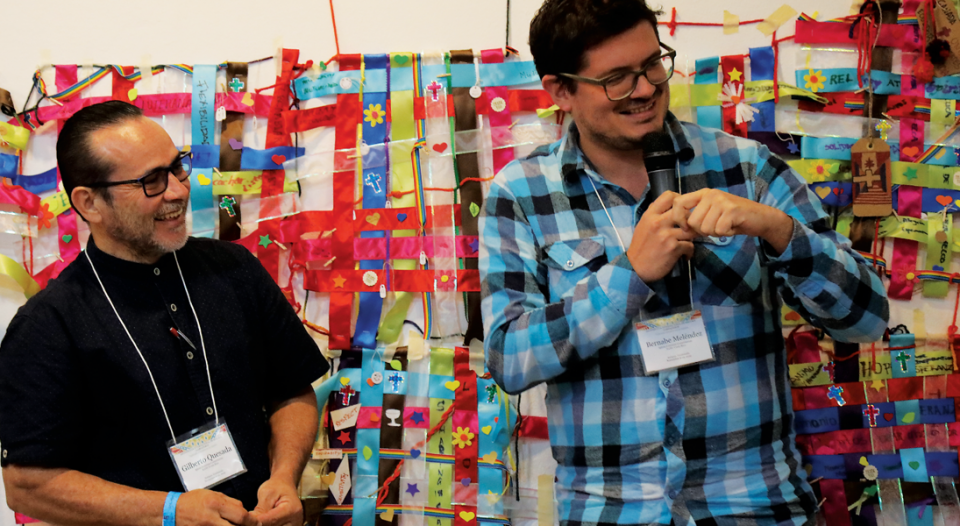 Gilberto Quesada Mora (left), president of the Costa Rican Lutheran Church, and Bernabé Meléndez present their group’s banner at the fifth international consultation, where they shared best practices for migration ministries. The theme of the consultation was “Weaving Links in Mission.”

At the Costa Rican Lutheran Church’s shelter in San José, a baby’s birth was welcomed with joy. The mother, who fled from Nicaragua to Costa Rica, had spent the last three months of her pregnancy at the migrant shelter. The church hosted a tea party and showered her with baby gifts, gestures that moved her to tears.

“Now the baby boy is part of our headquarters,” said Gilberto Quesada Mora, president of the Costa Rican Lutheran Church. “We pamper him, hold him and accompany him.”

This mother is one of many people who have experienced the Costa Rican Lutheran Church’s warm welcome and support over the past 15 years of its migration ministry. As violence and political instability have driven people to flee their home countries in places like Nicaragua and Venezuela, nearby nations have received an influx of migrants and refugees. Lutheran churches in countries such as Colombia, Costa Rica and Peru have responded by providing critical support during these moments of crisis, including safe housing, food and household items, legal aid and psychosocial care for trauma.

“We feel like we are an almost binational church, almost Costa Rican and Nicaraguan, because in some congregations 50% of the people are Nicaraguans,” Quesada Mora said. “We are involved in this wonderful, highly supportive work.”

For the first time, Colombia has become a receiving country, said Atahualpa Hernández Miranda, bishop president of the Evangelical Lutheran Church of Colombia. Twenty to 30 years ago, people fled violence and unrest in Colombia for Venezuela, but now the reverse is happening.

“Some people may think that since we’re neighboring countries, have such broad borders, share the same language and, to a large extent, share the same customs, fear shouldn’t be an issue,” Hernández Miranda said. “However, it is, in fact, an issue.”

Despite the countries’ proximity, Hernández Miranda said, there is prejudice and hate speech in Colombia against Venezuelan migrants, fueled by the media. That’s why it’s important, he argued, for the Colombian people to remember their history.

“It’s about never forgetting that experience and, now that it’s the other way around, responding the same way many Venezuelan men and women responded back then when the Colombian people were migrating to Venezuela,” he said.

Despite the countries’ proximity, there is prejudice and hate speech in Colombia against Venezuelan migrants, fueled by the media.

Peru has also received refugees from Venezuela, and the climate of xenophobia can make these newcomers feel unwelcome and unsafe, said Adita Torres, president of the Lutheran Church of Peru (Iglesia Luterana del Perú). In its refugee response, the church strives to make everyone feel welcome, providing a listening space and spiritual support. Venezuelan refugees reciprocate by offering their gifts and skills to help the church.

“The most important thing for these people is to hear words of encouragement, of hope, of acceptance,” Torres said. “[People who are migrants] need to see that not everyone rejects them, and there are people, churches and other bodies which accompany and support them.”

Among the best practices for migration ministry that Torres recommends are to train volunteers well and to intentionally plan out the care to be provided.

Sometimes the church’s first solution might not be the best one, so there’s a learning curve. For example, Torres said, it’s important to ask refugees and migrants about their basic preferred foods, which can differ across cultures. Peruvians eat rice as a staple, while Venezuelans tend to eat beans and flour-based foods.

On top of meeting such basic needs, the Lutheran Church of Peru is looking to provide legal aid and psychosocial care for trauma. “We’re now training volunteers who want to care for the Venezuelan migrants,” Torres said. “It’s a good idea to get the church ready, not only for caring for the migrants we now have, but other migrants who might come in the future.”

“Migrants need to see that not everyone rejects them, and there are people, churches and other bodies which accompany and support them.”

Meanwhile, Hernández Miranda emphasized the importance of involving Venezuelans at the forefront of migrant care centers. He described these Venezuelan leaders, who have stepped up to offer their gifts and knowledge to the migration ministry, as a blessing to the Evangelical Lutheran Church of Colombia.

“Venezuelans feel more comfortable when they come to the center and are received by a person from their own country who knows their situation, went through the same migration process, made the same long walk and arrived to an unfamiliar place,” he said.

The Costa Rican Lutheran Church makes sure to look out for the most vulnerable people, including women with children and transgender people, and to prioritize their care. The key, Quesada Mora said, is “being able to discern when a person, or a human being, is a potential victim of intersecting forms of discrimination,” which may put them at a higher risk.

Quesada Mora noted that the church has an “evangelical mandate” to care for people who have been marginalized and excluded from society, while Torres added that the Bible calls the church to provide shelter to foreigners.
“Our mission is to serve, to always be close to our neighbor, especially the most needy,” Torres said. “We need to be there, accompanying them. That’s our mission, to share God’s love with those who need it most.”