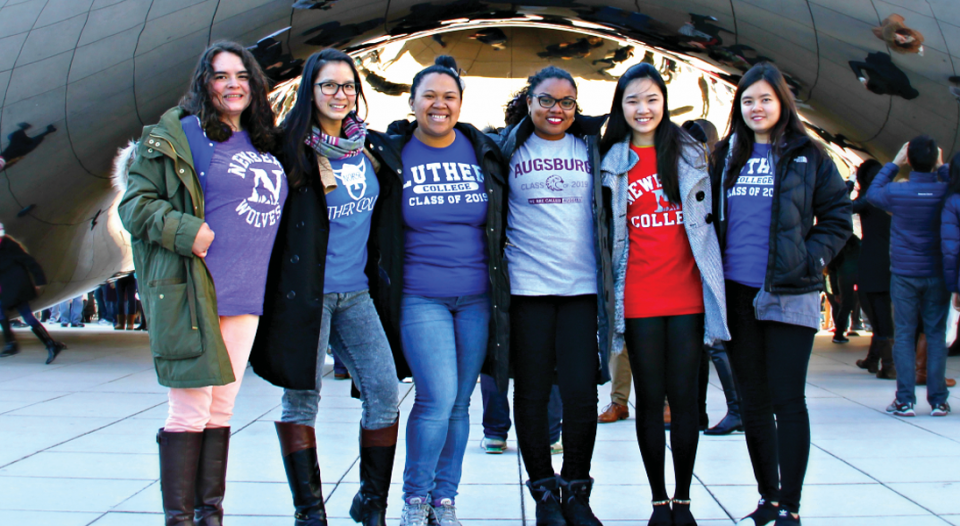 “Though God desires fullness of life and equity for everyone, as a church we recognize that women and girls in particular suffer a range of harm and injustice due to sex (biological), gender or both” (ELCA social statement Faith, Sexism, and Justice: A Call to Action).

Although the ELCA Churchwide Assembly adopted this statement in 2019, the church has a history of gender justice work through ELCA World Hunger, the Lutheran World Federation and other ministries. Notably, in 2015 it founded the International Women Leaders (IWL) program to accompany and elevate women leaders from its global companion churches. The scholarship program has two primary components:

The IWL program, which was funded by donations to Always Being Made New: The Campaign for the ELCA, maintains partnerships with nine ELCA colleges to cover all school expenses for scholarship recipients. Kaleb Sutherland, program director for scholarship administration and student engagement, said the ELCA and the receiving colleges and universities annually award these scholarships to around seven women who’ve demonstrated leadership in their home churches. The awards continue for the duration of their bachelor’s degree programs.

“I realize that, before my departure for the U.S., I was a very insecure girl. I came back much more confident.”

To date, 34 women have received such awards and 134 women have participated in leadership seminars through the program.

“This is a type of scholarship that’s extremely rare these days,” Sutherland said. “The idea is to remove any barrier for students to access this opportunity.”

Now, three college scholarship recipients—from the program’s first graduating class—are serving their communities in a range of fields. Despite their varied paths, they share a common sense of vocation, formed by their experiences at college. “These graduates all have a deep commitment to justice and equality,” he said. “They’re each discovering how they want to live that.”

“It changed my life”

Elisa Pérez-Trejo left Mexico City in 2015 to study at Newberry (S.C.) College through the IWL program. She never imagined how much the experience would transform her worldview.

“[I’d] applied not knowing what to expect,” she said. “This experience opened my eyes to new cultures and new ideas. It helped me to be more empathic with and respect different ideas, while always speaking truth and giving voice to the ones who don’t have one.”

After graduating in 2019 with a bachelor’s degree in international studies, Pérez-Trejo returned to Mexico City to work in migration ministry. She serves as a liaison between the Mexican Lutheran Church and agencies that provide returned Mexican citizens with Spanish classes, information on labor laws and human rights, and other services.

Pérez-Trejo credits her Newberry experience and God in enabling her to become a leader in the church. “Receiving this scholarship meant a lot for me,” she said. “It changed my life, my point of view, and gave me a new family—[other IWL scholarship recipients] who are my best friends. It also showed me that God calls everyone, no matter their gender, and calls us to be good to our neighbors.”

Empowered to empower others

Yuen Ching Lee graduated from Luther College, Decorah, Iowa, in 2019 with the help of an IWL scholarship. She was endorsed by her denomination, the Lutheran Church in Malaysia.

Originally from Selangor, Malaysia, Lee said studying in the United States broadened her “mind and mindset to what things and society could be like, especially when it comes to women empowerment and going against patriarchy.”
Today, Lee is a teacher for a Malaysian nonprofit, Dignity for Children Foundation, which educates underprivileged youth to pursue careers that could lift them out of poverty.

Lee believes the resilience she built as an undergraduate helps her better influence her students. “[It] allowed me to be more confident, and I’m able to empower my current students,” she said. “IWL has also given me many opportunities to learn beyond what I could have learned in Malaysia as a teacher, thus making me a better teacher overall.”

“Helping neighbors wherever I can”

Sarah Abendanon earned a marketing degree from Augsburg University, Minneapolis, from 2015 to late 2018 through IWL. She was endorsed by the Evangelical Lutheran Church in Suriname.

Before leaving for college, Abendanon felt frightened and excited about the opportunity, which she says was ultimately invaluable. “It enabled me to question things much more and be more assertive,” she said. “I realize that, before my departure for the U.S., I was a very insecure girl. I came back much more confident.”

Today, Abendanon is a publication officer at the State Oil Company of Suriname. She’s also started Hand Casting Suriname, which makes keepsake hand casts for people and their loved ones.

Abendanon remains committed to living out her vocation in her career and everyday life, a lesson she learned at Augsburg. “I continue to do the work of the ELCA and the IWL program [by using] my gifts and talents,” she said. “And I pass it on by helping [my] neighbors wherever I can. No matter where we are and where we are from. We are one.”

God called me to save a child bride

A vision for a more just society

Bishop thanks Women of the ELCA for leadership