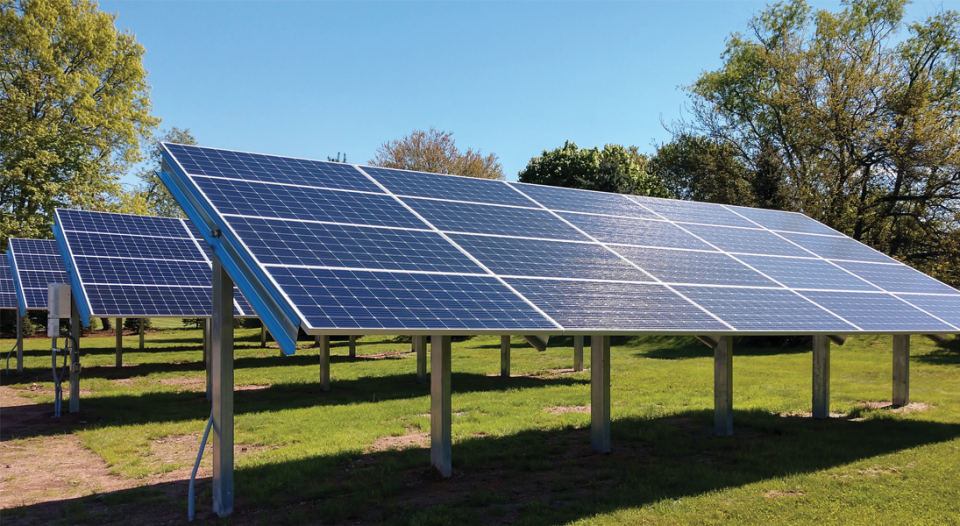 These efforts, many of them lay-led, range in complexity and are designed to make buildings and activities more environmentally friendly. There have also been unexpected benefits—in one case a congregation’s green initiatives inadvertently served as recruitment for their pastor.

That pastor was Nancy Gradwohl.

“What spoke to me when I answered the call to Faith Lutheran Church [in Leavenworth, Wash.] a year and a half ago was their concern for ecological justice that had transitioned into action,” she said. “That commitment continues today.”

Faith’s building was purchased from a Sears, Roebuck and Co. catalog in the early 1900s. It arrived by train in the small railroad and mining town, said Mary Schramm, a 25-year member. “In the past 10 years, members have repaired the windows, installed new doors, insulated the crawl space and installed a new thermostat to save energy,” she said.

Faith’s environmental stewardship extends into the community. The congregation funded the installation of 96 solar panels on the grounds of Leavenworth’s middle school, purchased four recycling bins for the downtown area, provided four city fountains that allow someone to refill a water bottle, worked with the community to find a way to recycle glass, and collected trash from parishioners to be used as compost on acres of flowers and vegetables.

Faith’s environmental stewardship team has driven efforts to share the congregation’s message. Members have worked with an interfaith climate group on an initiative to write letters to Congress, paid for ads in the local newspaper that address climate change, presented a resolution to its synod to take a leadership role, and held various educational forums and studies on the topic.

The team also created a Lenten calendar project that encouraged members to keep track of 16 ways to care for the earth daily, such as biking instead of driving, using LED light bulbs and more.

“As a way to raise money for projects, we initiated a mileage tax on our driving,” Schramm said. “At the end of each month, you paid a tax on the number of miles you drove. The amount of the tax per mile was up to each individual.”

In 2017, Mount Olive Lutheran in Minneapolis received a loan from the ELCA Mission Investment Fund to drill 48 wells in the church parking lot for geothermal heating. The 8-inch holes are 260 feet deep and spaced 20 feet apart. A network of underground tubes runs through the wells, beneath the street and into the church, said Joseph Crippen, pastor of Mount Olive.

The tubes carry a mixture of water and glycol. The fluid captures the ambient temperature far beneath the parking lot (about 55 degrees year-round) and transfers it to pumps inside the church building. The lengthy exchange process, with minimal help from fossil fuels, cools the church in summer and heats it in winter.

It was a long process, but Crippen said the impetus for geothermal began when Mount Olive formally approved signing the Paris Pledge for Action, a worldwide compact uniting thousands of organizations behind the Paris Agreement. “We felt, as did many across the nation, that at least we could work toward moving off of reliance on fossil fuels,” he said. To do so, the parish joined Minnesota Interfaith Power & Light, a coalition of faith communities pursuing climate justice.

Crippen said the congregation had long needed air conditioning in its worship space. The newer parish house has traditional air conditioning, but the lack of ventilation and overheated air during summer worship could be brutal. “As global temperatures have risen, we noticed much longer periods of almost intolerable heat inside our brick structure, especially for the vulnerable,” he said.

“This has given us a sense that we are actually making an impact on the climate crisis.”

The congregation, which has a climate justice committee, also talked at length about the stewardship of caring for its building. “We are in a neighborhood of south Minneapolis that has many needs, and we feel ties to our neighbors and a shared sense of working together,” Crippen said. “Our building and its location are not only vital to our worship life but also critical tools for us in the ministry God has placed us here to do. So, caring for the building, and making it less a part of the fossil fuel crisis, is a stewardship decision for our whole life and ministry together.”

Crippen said the cost savings have been clear. The new, clean-energy system is designed to cut the congregation’s dependence on fossil fuels by as much as 75%, and there is potential to move the whole building to geothermal.

But Crippen said the impact on the life of the congregation has extended far beyond cost savings. “This has given us a sense that we are actually making an impact on the climate crisis,” he said.

Our Saviour Lutheran in Arlington Heights, Ill., has had a congregational green team since 2005, said Jim Valentine, a deacon and the church’s congregational operations officer.

The 25-member team has led Earth Sunday celebrations; landscaped the church property to include more natural, native plants and uses organic fertilizer; hosted a “veggie share” where members bring extra garden produce to church for others who need it; and hosted an annual Earth Day forest preserve cleanup project.

One year, the green team performed as a marching band in the local Fourth of July parade. Another year it starred as a rock band on a float. Since then Our Saviour has partnered with seven area congregations to form Interfaith Green Partners, which participates in the parade to collect recyclables.

One of the team’s biggest and most recent accomplishments was the installation of 272 solar panels on the church building’s roof. The panels currently produce more electricity than the congregation needs, Valentine said.

At Our Saviour, the team’s mission is to participate in activities that create a sustainable environment at church, at home and in the community.

And on the East Coast, Bethany Lutheran Church in Cromwell, Conn., made property upgrades in March 2019 that included two high-efficiency propane boilers and a ground-based solar panel array to generate electricity. On sunny days, the panels produce 100% of the congregation’s energy needs. The congregation also expanded Wi-Fi capability throughout the building to, among other things, allow for remote control of thermostats.

“We want to be good, faithful stewards of God’s creation,” said Paul Krampitz, pastor of Bethany. “This is a positive message to the community as to who we are as a church.”

Called to care for creation