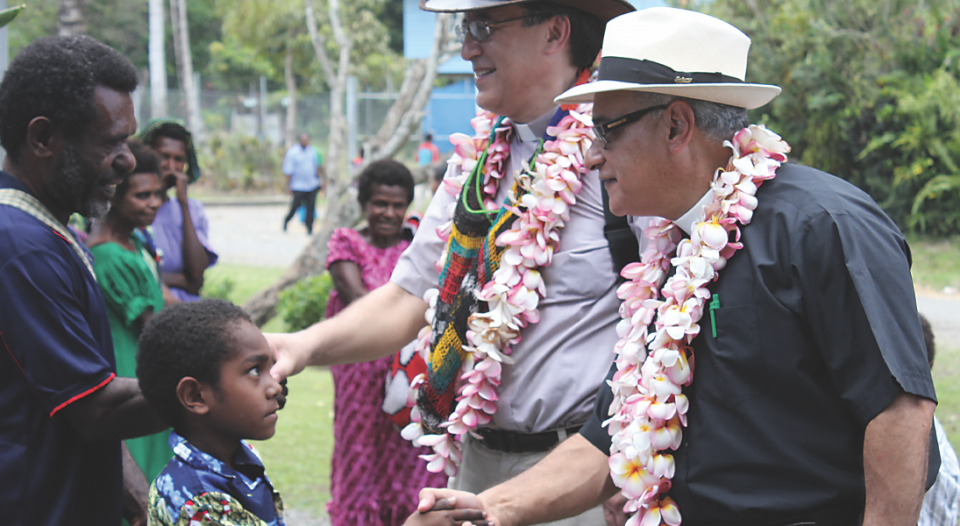 Malpica Padilla (right), executive director of ELCA Global Mission, helped develop with companions the ELCA’s missiology of accompaniment, which is still in use today. Here he visits companions while on a 2013 Global Mission trip to connect with members of the Evangelical Lutheran Church of Papua New Guinea.

Hispanic leaders, ministries and resources in the ELCA often go under-supported, underappreciated and uncelebrated. Ours is a hidden story.

There are many Hispanic ministries and leaders throughout this church that I admire and could lift up, perhaps none more than my father, Rafael Malpica Padilla, a pastor and the executive director of ELCA Global Mission, whom the Lutheran Church in Nicaragua dubbed el obispo caminante (the bishop who walks among us).

He became bishop of the Caribbean Synod at the ELCA’s inception in 1987. At 30, he was the youngest ELCA bishop and the first ELCA bishop of color—two facts that aren’t commonly acknowledged. My father helped found and shape ELCA congregations in Puerto Rico, empowered leaders that serve the church in every expression and is still considered the father of that synod.

In honor of National Hispanic Heritage Month, I’d like to highlight three moments in which a Boriqua (Puerto Rican) has given life to this church.

“We are here for peace”

My first memory comes from an early period of my father’s ministry. At age 3, I awoke to noises coming from downstairs. I tiptoed down and saw my father crying on my mother’s shoulder. Standing in the darkness, I wasn’t sure what I was witnessing, but I stayed quiet and returned to my room. That image remains burned in my mind.

Years later, I asked Dad what had happened. At first, he couldn’t believe that I remembered, then he told me about a trip he took to El Salvador with Herbert W. Chilstrom, then presiding bishop of the ELCA. They were assisting Medardo Gómez, bishop of the Salvadoran Lutheran Church, with ministry matters and helping civilians obtain medical aid when they were stopped by the military and held at gunpoint.

Standing between his colleagues and the gun barrels, he answered, “Fine, take my life but let these people go. We are here for peace.” Dad told me that his life flashed before his eyes in that moment, but afterward the travelers were finally set free. Upon returning home, he broke down in my mother’s arms as I watched from the shadows. Working for God’s kingdom of peace, love and justice was never just talk in my family but action.

During my first call, I served a congregation that had a strong connection with the Iglesia Luterana Agustina de Guatemala (ILAG). At that time, leadership of the ILAG was passing from the founding president and pastor to his daughter, Karen Castillo. As I prepared to develop this relationship, I discovered that my father was actually considered the “grandfather” of this young church body. He provided the ILAG with guidance and counsel, and even installed its first president in 1991.

Working for God’s kingdom of peace, love and justice was never just talk in my family but action.

Castillo and I connected as the next generation of pastoral leaders after our fathers, and I experienced firsthand a small piece of my dad’s global ministry as we traveled to the Mayan villages around the country, delivering the gospel through accompaniment.

During my first visit to Guatemala in 2016, I saw pictures of my father on the wall of ILAG’s church center. This was a profound moment. I better understood the fullness of his influence, and not just in Guatemala. He’s been a counselor at the inception of Lutheran churches in Nicaragua, South Sudan and beyond.

In collaboration with global companions and other ELCA staff, my father has worked to reform centuries of colonial mission work driven by conquest and the myth that European experience was divine. This has been, and continues to be, a massive undertaking.

My father taught me that, though Hispanic stories are often hidden, we can and do change the world, the church and people’s lives.

On the path to change, he has hit many roadblocks. We can always tell this on the days he is quiet, shaking his head and breathing purposefully, frustrated as the church he loves so much seems to betray him. Nevertheless, he perseveres in his struggle to change the way the ELCA engages the “other” as church.

Accompaniment, defined as “walking together in a solidarity that practices interdependence and mutuality,” is driven by the core values of mutuality, inclusivity, vulnerability, empowerment and sustainability. Accompaniment has become central to how we do church today globally and locally. This framework continues to draw the church into the difficult questions of how to be church for tomorrow.

There’s much more I could share about my father’s ministry. He preached in Martin Luther’s Castle Church in Wittenberg, Germany, on the 500th anniversary of the Reformation and has changed the face of Lutheranism around the world, but he’s proudest to be called “Lolo” (grandfather). He taught me that, though Hispanic stories are often hidden, we can and do change the world, the church and people’s lives.

I hope the ELCA will lift up more stories of people on the margins, so that we see ourselves reflected in the church and feel inspired to share our God-given gifts with the world and glorify God in heaven.