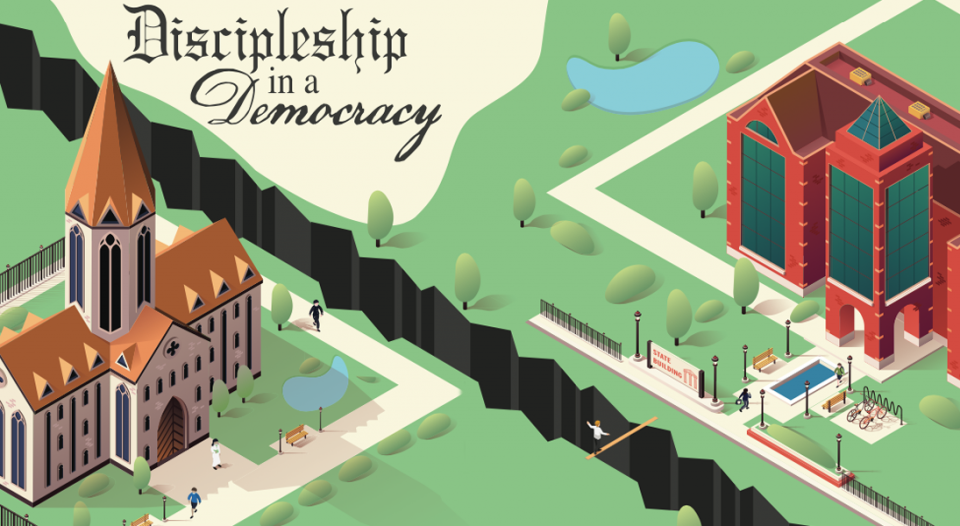 “Pastor, I was really upset by Sunday’s sermon. You’re meddling in politics, which you have no business doing. I also hear that you participated in those recent protests. Don’t you understand the separation of church and state?”

“Some of us are frustrated that our church won’t take a stand. Aren’t we named for a protester, Martin Luther? Don’t we point with reverence to martyrs like Dietrich Bonhoeffer, who took a very political stance?”

“As a young person, I am deeply concerned about social justice, and I find little to no support for my convictions in my church.”

“I don’t want my church to tell me how to vote, but I would welcome some guidance on how to prayerfully cast my ballot.”

Each of these wide-ranging views represents the stance of some members in a typical ELCA congregation. It’s little wonder, then, that much of the conflict we experience in the church today is generated by differing views about the proper relationship between church and state, faith and politics.

Prompted by increasing polarization over the appropriate role of government and by the conflict such divisions are causing in congregations, the Minneapolis Area Synod brought to the 2019 Churchwide Assembly a memorial “to initiate the development of a social statement on the role of government, the nature of civic engagement, and the relationship of church and state.”

The synod’s bishop, Ann Svennungsen, expressed her conviction that “one of the great crises currently facing the United States is the role of government.” The ELCA, she said, “could contribute to the political landscape of the country with a social statement on this topic.”

Another who urged offering guidance to the church was Gladys Moore, a pastor of St. John Lutheran Church, Summit, N.J. Moore said the urgency she felt last year has been heightened by the COVID-19 pandemic and the anguished cries for racial justice across the country. The church, she said, can “provide guidance about how and why, in service to the gospel, we Lutherans approach our civic responsibilities, especially when the gospel message so clearly flies in the face of an unjust society.”

Recognizing that a social statement takes years to develop, Moore and others argued last year in favor of a social message, which could be issued in less than a year by action of the ELCA Church Council. In the end, nearly 900 assembly voting members decided that doing both would be wise.

The council then fast-tracked the message’s development so ELCA members could benefit from their church’s advice prior to the 2020 national elections.

In June, the Church Council unanimously adopted “Government and Civic Engagement in the United States: Discipleship in a Democracy.” The social message gathers into one document what the ELCA and its predecessors have stated about the topic over many years and offers guidance for thinking about faithful Christian citizenship.

Stewart Herman, a retired Concordia College professor contracted to assist in the process, said he was especially impressed by the large number of substantive responses received from across the church as drafts were circulated. More than 550 individuals offered comments. Herman said he is pleased that so many “feel empowered to jump in” and that the message “helps people stir up their own thinking.”

This fall, a task force will begin developing the more comprehensive social statement, which will address many concerns and questions beyond those included in the message. Willer, who oversees the development of social statements, said of the 18 task force members who were selected from more than 80 nominees, “This church will be well-represented.”

The bipartisan and ethnically diverse team includes clergy and lay members from urban and rural communities, attorneys and theologians, and members who serve in the military and government.

Initial listening events to gain input from ELCA members will be held throughout the church. As study materials and a statement draft are developed, they will be made available to everyone for comment and feedback. A final proposed statement will be presented to the 2025 Churchwide Assembly.

Views on government vary widely in the United States and have changed dramatically over the past half-century. The social message names “a spirit of broad dissatisfaction, mistrust, protest, and even contempt of government in the United States.” It cites a Pew Research Center survey that revealed “the percentage of U.S. citizens who trust the federal government to do what is right … fell steadily from 77% in 1964 to 17% in 2019.”

Regardless of which party controls the White House or other branches of government, research shows that confidence has continued to erode.

In the face of such widespread antipathy toward government, the social message declares that Lutherans should recall biblical and Lutheran confessional principles reminding us that law and government are gifts from God for the ordering of creation. “God intends for government to protect society and to enable it to flourish,” the message asserts. Responsible citizenship is “a calling from God” to each of us.

Debate around many current social issues has convinced members that the ELCA needs to address the foundational matter of church and state. Immigration policy is an area where differing perspectives on Christians’ and the church’s appropriate role have provoked heated debate. In what proved to be the 2019 assembly’s most controversial action, the ELCA declared the denomination a sanctuary church body.

Ongoing discussion over that action reflects a gulf between members who come to different conclusions as to the meaning of various Scripture verses. Some believe that Christians’ primary responsibility is to citizens and legal residents of their own nation. Others are convinced that governments and social agencies should serve people regardless of their legal status.

Although ELCA leaders on the issue have emphasized that the sanctuary declaration does not call for lawbreaking, some members are willing to risk arrest or even imprisonment as they shelter migrants. (See “Sacred hospitality,” May 2020.)

Responses to the COVID-19 pandemic and calls for racial justice have shone a spotlight on other sharp divides in the nation and in the ELCA over church-state relations. Some people reacted against governors’ inclusion of churches in bans on large gatherings, arguing that the states were curtailing freedom of religion. Many have felt called to join Black Lives Matter demonstrations and protest police violence and systemic racism. Rostered ministers and lay leaders engaging in such protests have been chided by some and cheered by others in their congregations.

Seldom has a presidential campaign generated such intense feeling and heated rhetoric as the one currently nearing its conclusion. There are growing fears that, whoever wins, the outcome will further divide our nation and cause even more intense conflict within families and churches.

Between the Bible and the Bill of Rights

The earliest additions to the U.S. Constitution, known as the Bill of Rights, were enacted in 1791. First among them are guarantees against government intrusion into matters of faith: “Congress shall make no law respecting an establishment of religion or prohibiting the free exercise thereof.”

Some interpret the First Amendment as constructing an absolute wall between church and state. But as the Lutheran Church in America (a predecessor body to the ELCA) described in “A Social Statement on Church and State: A Lutheran Perspective” (1966), many Lutherans view the relationship between church and government as one of “institutional separation and functional interaction.”

The First Amendment extends certain liberties to churches and other religious bodies. We are free to preach and teach as we are guided by Scripture, our theological tradition and our convictions. Under what is often called the “ministerial exception,” churches determine who will lead them without certain limitations that are binding upon other employers.

With the right hand, God governs by grace and gospel, extending mercy as a gift. With the left hand, God carries out his stewardship in the world by means of law and government.

Recent Supreme Court decisions have ruled that church-related schools and organizations may refuse to extend certain employee benefits that run counter to their convictions.

But in other aspects of our communal life, church members are held to the same standards as all others in society. Church construction projects must conform to building and fire codes. Religious communities can’t use illegal substances under the guise of sacramental practices. Recent revelations of clergy sexual abuse across denominations have resulted in criminal prosecutions in addition to ecclesiastical discipline.

Holding accountable those who govern

A key aspect of “functional interaction” occurs through the ELCA’s advocacy efforts, whereby the church encourages government officials to enact policies that promote just treatment of all people.

The ELCA operates offices of public policy in several state capitals, and a Washington, D.C., office advocates on federal legislative matters. In these arms of the church’s ministry, the ELCA doesn’t “lobby” to serve its own interests. Rather, it advocates especially on behalf of those on the margins of society, whose voices are often suppressed. Its stances are based upon the church’s social statements and messages, not the personal views of ELCA Advocacy staff.

Amy Reumann, director of ELCA Advocacy, summarized this approach in the Journal of Lutheran Ethics: “As the people of God called and sent to the world, our public testimony is always an opportunity to proclaim a hope-filled witness to the Good News of Jesus Christ, the God who calls us to do justice” (April 2020).

ELCA Advocacy offices also help the church hold accountable those who govern on behalf of the people. Advocacy staff frequently share information on pending critical issues so members can call or write their representatives and share their Christian convictions.

Sara Lilja, director of the Lutheran Episcopal Advocacy Ministry of New Jersey, explained that a key role for her office is helping ELCA and Episcopal Church members understand why their churches engage in advocacy and “how we take our faith to the streets.”

A consultant on the social message, Lilja said the broader social statement will need to address more fully multicultural and multifaith contextual realities. In many areas, she noted, Christians are a minority of the population and are challenged to “shape public opinion” amid many perspectives.

In some areas the church is beyond the reach of the law, but in many other aspects, our communal practices and individual behaviors fall within what Luther and others have referred to as the work of “God’s left hand.”

The “two hands” (or “two kingdoms”) teaching, explained in detail by the social message, holds that God cares for creation in two ways, through law and gospel. With the right hand, God governs by grace and gospel, extending mercy as a gift. With the left hand, God carries out his stewardship in the world by means of law and government. The social message sets forth the ELCA’s teaching on these matters, helping church members become more faithful in their Christian discipleship and responsible citizenship.

In assessing government’s effectiveness, the message declares, one question dominates all others: “Is the neighbor being served?” The message offers 14 guidelines to help members answer that question and navigate the complex interrelationships of church and state, government and civic engagement.

Faithful disciples of Jesus, the message concludes, understand “that energetic civic engagement is part of their baptismal vocation. … The ELCA holds to the biblical idea (Jeremiah 29:7) that God calls God’s people to be active citizens and to ensure that everyone benefits from the good of government.”

Download the social message on government and civic engagement and a related study guide at elca.org/socialmessages.