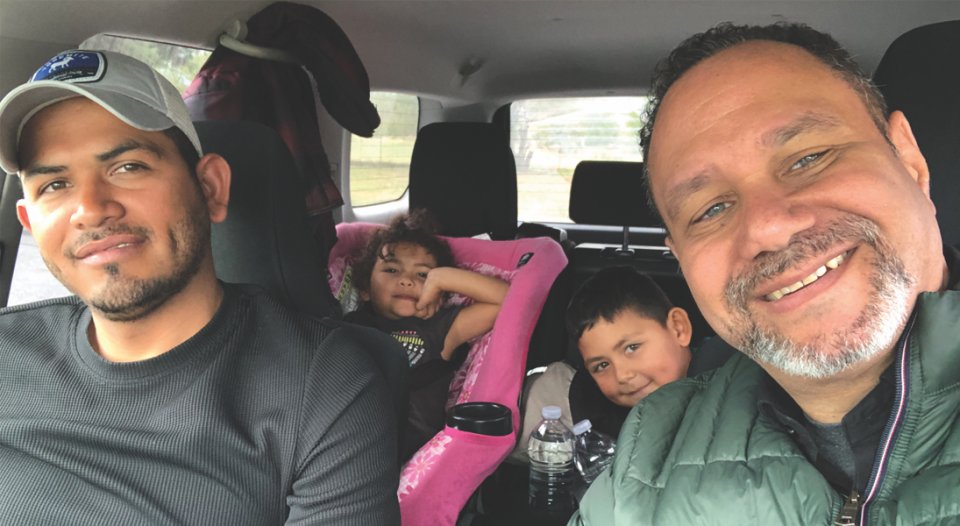 Nelson Rabell-Gonzáles (right), a pastor of St. Paul Lutheran Church, Lodi, Calif., accompanied Madelyn (left in back seat), Darel and their father, Wilian (last name withheld), to an immigration hearing in Los Fresnos, Texas, that would determine the children’s future in the United States.

One thousand, nine hundred and seventy-three miles. That’s the distance between Lodi, Calif., and Los Fresnos, Texas. It’s a distance I drove twice with a father and his children—two little Lutherans facing deportation.

Wilian (last name withheld) and his children, Darel, 5, and Madelyn, 3, belong to my congregation, St. Paul Lutheran in Lodi. On March 1, we started this 1,973-mile trip to Los Fresnos because Darel and Madelyn had an immigration hearing scheduled there.

Some background: Violence, crime and extreme poverty spurred Wilian’s family to migrate from Honduras to the United States. He arrived in March 2019 with his older son, Oseas, and the hope that they’d make a better life here. His younger children and their mother stayed in Honduras and decided to join them later.

On their path to the United States, Darel, Madelyn and their mother arrived in Matamoros, Mexico, where they struggled for four months in a migrant camp. Wilian showed me pictures from the camp. His kids looked like zombies—there was no joy or hope in their faces.

Many migrant parents in this camp became desperate and decided to send their children across the border. Darel and Madelyn’s mother was one of them. But the children were captured by Immigration and Customs Enforcement (ICE) officials while crossing the border and were taken to a detention center near Los Angeles. They spent 40 days there.

Wilian showed me pictures from the migrant camp. His kids looked like zombies—there was no joy or hope in their faces.

Since he had started his asylum case, ICE contacted Wilian and released Darel and Madelyn to him. Wilian and the children’s mother have since separated.

After Wilian and his three children started to worship with us at St. Paul, he received a letter from immigration authorities informing him that Darel and Madelyn had to be in Los Fresnos for their hearing. How can a migrant who is trying to follow the immigration process but doesn’t have a car or resources be expected to succeed in such an endeavor?

Thanks be to God for the community of faith. Our congregation stepped up and collected money to finance the trip. I talked to the council and parishioners and told them I would drive the family to lower the costs of the trip and to make it more suitable for the children.

But as we made the long drive to Texas, I feared that Darel and Madelyn would be deported and I would have to give pastoral care to a father missing his kids once more.

Throughout our trip we were thankful for the prayers and words of encouragement we received from ELCA bishops, pastors, members and ecumenical partners. The children were blessed with two Latina lawyers, Gladys Hernandez and Miriam Aguayo, who work for the ProBAR Children’s Project, a migrant advocacy group in Harlingen, Texas.

How can a migrant who is trying to follow the immigration process but doesn’t have a car or resources be expected to travel 1,973 miles?

We arrived in Los Fresnos on March 3. During Darel and Madelyn’s hearing, Hernandez and Aguayo argued for the case to be transferred to an immigration court in San Francisco, which would make it easier for the family to attend subsequent meetings.

When the judge decided to transfer the case to California, I was so relieved that I made the sign of the cross. Wilian told me that when he saw me do that, he knew everything was going to be OK and the kids were going to return home with him.

As we headed back to Lodi, joyful and hopeful because of the favorable decision, Wilian told me that he knew God was with us and that he’d read every prayer, message of hope and wish shared with us via social media. He’d borne witness to the wider church surrounding us with support, and he knew we were not alone.

I have to be honest with you: Wilian had more faith and confidence than I did. I was super-afraid about what would happen to the kids. His faith in the face of insurmountable odds kept me going.