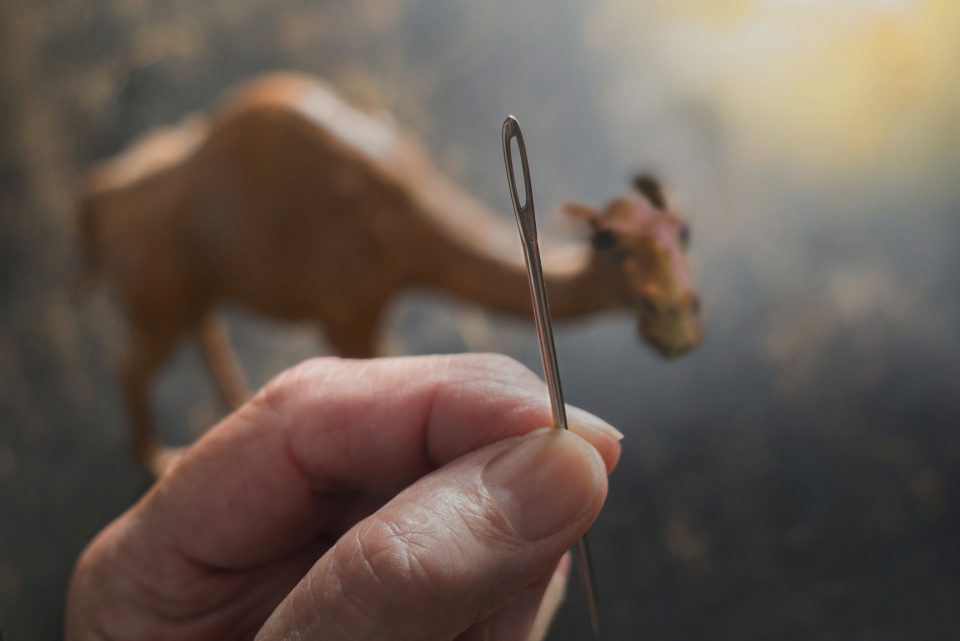 This week’s passage on “the rich man who walks away” has been troublesome for Christians since its earliest tellings. Can the rich not be saved? Does Jesus disassociate himself from God? What’s all that business about camels and needles? There is so much that is confusing here. What follows is my attempt to make some sense of it.

The first thing to note is that the rich man who questioned Jesus in the passage was sincere and beloved by Jesus (Mark 10:21). The man ran up and fell on his knees before Jesus (Mark 10:17) and has zealously kept the law since his youth (Mark 10:20). He wasn’t trying to trap Jesus, as is sometimes portrayed. Rather, he recognized Jesus as someone who knew the way to eternal life and was simply trying to be certain of his own life in the world to come.

Yet Jesus bristled at his greeting. Why? “Good teacher” was a kind, acceptable greeting in Greek. But in Hebrew or Aramaic, it gives too much glory to the human who is being greeted and is unheard of outside of this usage (though people could certainly be described as “good” in the third person). In some form of the Amidah (a main ritual prayer in Judaism) recited around the time of Jesus (it was codified by Gamliel II after the fall of the Second Temple because multiple versions existed previously), God’s name is הטוב “the Good” (now in the 18th blessing). Elsewhere, when receiving good news, people are to “bless The Good who does good” בָּרוּךְ הַטּוֹב וְהַמֵּטִיב (M. Berachot 9:2). God is the only one to be called good, and Jesus, though in the very nature of God, didn’t consider equality with God something to be grasped/stolen ἁρπαγμὸν (Philippians 2:6).

Manner of address aside, the rich man asks Jesus what he needs to do to inherit eternal life. After assuring the man that he already knows the commandments, Jesus lists the social commandments from the Decalogue (with an addition of Deuteronomy 24:14-15—“do not defraud [workers],” which would have been especially applicable to rich employers). We should pay attention to the commandments that Jesus lists here. Obviously, the man reverenced Jesus and was eager to be with God in the world to come. But he was also clearly rich because of his garments. Jesus lists the laws about abusing one’s neighbor. It’s relatively easy, when freed from the pressure of daily toil with others, to forget the needs of others and our responsibility to be our siblings’ keepers. Indeed, James makes a blanket statement that the rich abuse and exploit the poor (James 2:6-7). Jesus recites these laws for the man to make sure that he hasn’t been abusing those less fortunate than him. The rich man assures Jesus that he has fulfilled his requirements to his family and neighbor since his youth.

Jesus loves this man who doesn’t use his wealth and power to harm other people. But Jesus says he does lack one thing: he must sell all he has and give it to the poor to have treasure in heaven (Mark 10:21). Note what Jesus doesn’t say here: the man didn’t have to give away everything to enter eternal life (as in his original question). This is not a question of how much he had to give away to secure salvation for eternal life. That’s not how eternal life works! Humans can’t gain eternal life through their works—that’s God’s job (Mark 10:27). The rich have the same and only hope as anyone else—God’s salvific work on their behalf!

If humans open themselves up to God even as little as the eye of a needle, God will open up as much for a camel or cart to pass through!

Today, one doesn’t have to look far for stories of rich people giving to charity and doing holy work. But we can’t forget that there are two means by which Jesus evaluated the rich man. The first is not injuring other people in the making or maintaining of wealth (commandments). If a CEO makes billions of dollars and donates much of that to charity but pays starvation wages, such that people can’t afford housing or medicine, he has defrauded his workers and not kept the commandments. The second means for evaluating the behavior of the rich is to ask if they are self-sacrificially generous with their wealth. If a person pays living wages and doesn’t mistreat others but isn’t generous with her wealth, she isn’t fully participating in the kingdom of heaven, even though she didn’t violate the commandments.

The rich man from the passage goes away sad. I think this is because he was genuinely hoping that Jesus would give him a passing score and congratulate him on his sincere effort instead of telling him he had failed to live in a most holy way. The text doesn’t say, but I think the man went home and sold all he had and continued to devote himself to living righteously.

After the man leaves, Jesus talks about how difficult it is for the rich to participate in the kingdom of heaven (Mark 10:23-24), going so far as to say that it is easier for a camel to go through the eye of a needle than for a rich person to enter the kingdom of heaven. Some apocryphal teachings try to explain away the severity of Jesus’ pronouncement by arguing that there was a small pedestrian door in city gates. A camel laden with goods was too big to pass through this door, but a camel that was stripped of goods and lowered its head could squeeze through. It’s easy to see why this is a popular teaching. A little humility and you’re in, no problem. The problem is that we don’t have any evidence for this understanding for at least a thousand years after Jesus’ resurrection, nor calling the pedestrian gate the “eye of a needle” nor even a pedestrian door in a larger gate until centuries later.

In Jesus’ day, the eye of a needle was about the same size as today. Fitting a camel through that eye isn’t just a matter of a little humility and shedding of accoutrements. It’s impossible. And it needs to be impossible for his point to have the power that it would have for the original hearers.

Several times in very old midrashim that were incorporated into later collections, commentary on a verse from the Song of Songs (My beloved is knocking: “Open to me, my sister, my darling, my dove, my flawless one …” Songs 5:2) is used to point to the ways in which God invites those who are trapped into freedom. Several variations of the saying exist, but most follow the formula: “the Holy One, blessed be he, says: if you will open for me an opening as small as the eye of a needle, I will open for you an opening as wide as a camel and carts [or tents, or carriages] (Pesikta Rabbati 15:7, Pesikta de-Rav Kahana 5:6, Song of Songs Rabbah 5:2,2). Jesus is referencing an apparently well-known allegorical interpretation of Song of Songs (though attributed to Rabbi Yose) to point to the powerful and loving desire of God to honor and magnify the efforts of those who even begin to work on behalf of the kingdom of heaven. If humans open themselves up to God even as little as the eye of a needle, God will open up as much for a camel or cart to pass through! Even in the hyperbolic description of how difficult it is for rich people to participate in the advance of the kingdom of heaven, Jesus alludes to God’s desire to assist in any small effort.

This tricky passage becomes much clearer when we notice that eternal life and the kingdom of heaven are two different concepts. There are no special rules for the rich or the poor in entering eternal life. God can make that happen—for humans it is impossible. Participation in the spread of God’s kingdom here on earth is a different matter. It’s easy for the poor to want an anti-empire where God’s justice overturns the might-[and wealth]-make-right order that we observe. For the wealthy, things are already good and desiring to shed our wealth-power so that God can be in charge isn’t as attractive.

Hear the good news! Even when Jesus described how difficult it is for people to make that switch in orientation from building up wealth here to building up God’s kingdom, he points to how eager God is to reward the smallest movement toward the kingdom of heaven.