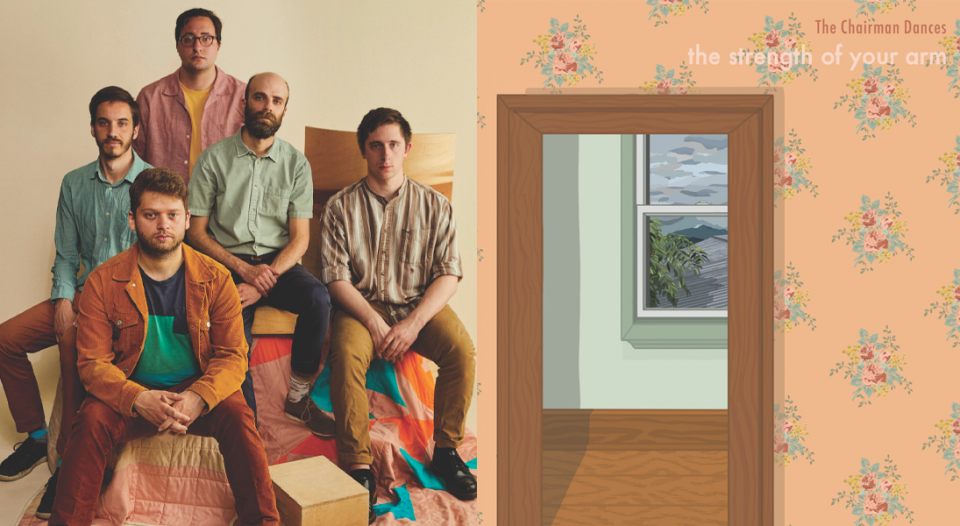 Eric Krewson (center) is the frontman and lead songwriter of the Philadelphia indie rock band the Chairman Dances. He wrote most of the band’s new album while serving as an artist-in-residence at the Grünewald Guild in rural Washington state.

Eric Krewson wrote most of his band’s new album while living in a 6-by-6-foot shack in the Cascade Mountains in fall 2019.

The frontman and lead songwriter of the Philadelphia indie rock band the Chairman Dances was in rural Washington state, serving as an artist-in-residence at the Grünewald Guild, an arts education nonprofit retreat center founded by Elizabeth and Richard Caemmerer (the latter was a longtime art professor at Valparaiso (Ind.) University and the Lutheran School of Theology at Chicago).

Perhaps because of the solitude Krewson often experienced while writing the album, the complex but pretty songs on the Chairman Dances’ the strength of your arm album focus on the “warmth and tenderness” of connection, he said. It’s also replete with biblical references, pairing scriptural stories with the songs’ narrators.

“Most of the songs are memories of loved ones who experienced profound disappointment and suffering and—in spite of those evils—were exceedingly generous,” he wrote on the Chairman Dances’ blog.

Living Lutheran spoke with Krewson, who attends Evangelical Lutheran Church of the Atonement in Philadelphia, about his artistic process and focuses.

Living Lutheran: For people unfamiliar with the Chairman Dances, how do you describe your music?
Krewson: Music journalists usually peg us as art rock or baroque pop—sometimes indie or alternative folk. I think what they’re getting at with “alternative” and [those] high-minded adjectives is that our music has layers to it. It’s clear, just by looking at the song and album titles, that the art is religious in nature.

How did you come to participate in the artist residency at the Grünewald Guild?
My previous pastor, who is a visual artist, took courses at the guild; she recommended it to me. It seemed like a good fit, so I applied to their program and for a leave of absence from my academic library day job. I was fortunate enough to clear both hurdles.

The Grünewald Guild seeks to explore the relationship between art, faith and community. What was your experience there like?
The guild was started by Richard and Liz Caemmerer—both are or were artists; Richard has passed. Richard designed an impressive amount of Lutheran worship spaces. Liz and the current staff at the guild are warm, generous people. The landscape there is beautiful.

I think the album’s characters and narrators are striving, like me, to glimpse the Lord beside them in their work.

The residency itself is open-ended. Your time is your own to do with as you please. [My experience there was] fairly idyllic. I was there in the fall, which meant I could pick an apple off the tree to have with breakfast. I’d make coffee and toast and pray a psalm. Then I’d get to work.

Could you explain a bit about your process of writing the songs that became the strength of your arm?
I believe I wrote all of the lyrics first, either as short stories or free-verse poems, which I set to music. Once I was at the guild, I rewrote my initial musical material and started work on the arrangements, the harmonies and counterpoint you hear on the album.

How would you describe the album? Did you set out to write particular kinds of songs for this collection?
I set out to write a response to what I saw as the prevailing artistic narrative of gleeful despair. While I’m not optimistic about the future, the simplicity of that narrative leaves out a great deal. Even now, many of us care deeply for creation, attempt to redeem our relationship to it; we tend the sick, the poor, our democracy; we try to be good friends, parents, neighbors.

I think the album’s characters and narrators are striving, like me, to glimpse the Lord beside them in their work, and to receive the blessings that come with the acknowledgment of God’s presence.

How did Lutheran theology influence the direction of your songwriting for the record?
There are a number of professors at Luther Seminary [St. Paul, Minn.]—Kathryn Schifferdecker and Craig Koester, to name just two—whose writing has been helpful to me. Additionally, weekly, the seminary puts out podcasts and articles that are nourishing in ways that academic theology often is not. … All of these things have shaped my theology and artist aesthetic, which are really one and the same.

The Chairman Dances’ song “Dorothy Day and Peter Maurin” is being presented to the Vatican. Could you tell us more about that?
A few months back, the Dorothy Day Guild [which promotes the cause to recognize the journalist and activist’s sainthood] emailed me, asking if they could include our recording with materials about or by Dorothy that they’d be shipping to Rome, in consideration of her canonization. I obliged and mailed them a CD. [They blessed] the materials in December and shipped them over the Atlantic soon after.

Go looking for the word