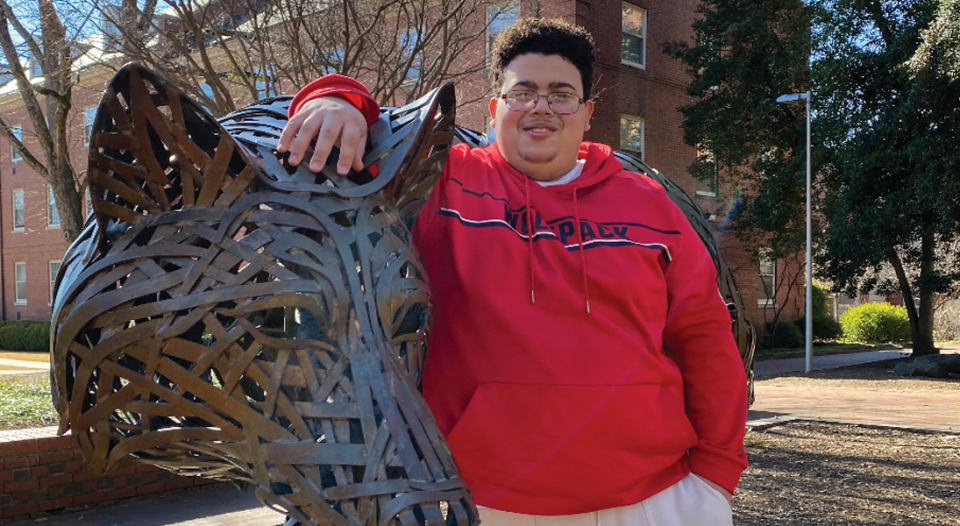 Michael Cruz, a former foster care client of Lutheran Services Carolinas, was the valedictorian at his high school and is now a freshman at North Carolina State University in Raleigh.

In his valedictorian speech at Goldsboro (N.C.) High School, Michael Cruz told fellow foster children they were blessed with a life of greater purpose.

“I have dedicated my life to be a light to those lost in the darkness,” said Cruz, a former foster care client of Lutheran Services Carolinas. “I’m asking you guys to join me in redefining what it means to be a foster kid. Remember that God puts his strongest soldiers on the front line because that’s where the toughest battles are. Right now, you have a choice. You can stay a prisoner of your past or the leader of your future.”

Cruz’s foster care journey began when he was 5 years old, while he and his mother were living in New York.

“My mother met this guy, and he seemed pretty cool at first,” Cruz said. “He was charismatic, and he seemed to be very caring and loving. But it all changed in the blink of an eye. He became very malicious and started manipulating us. I was sexually abused, physically abused and emotionally abused.”

The abuse continued for about five years as the family bounced between different homeless shelters. Cruz’s mom was dealing with personal issues at the time, and he said she didn’t know the details of the abuse. When Cruz turned 10, he said, the abuse stopped.

The family then moved to North Carolina, and Cruz started dating his first girlfriend, which opened his eyes to the severity of what he’d experienced. He also discovered later that his abuser was sexually abusing his younger siblings.

The family stayed together for another five years before everything came to a boiling point one day. The boyfriend was yelling at Cruz for not agreeing with his political views, which had become more radical over the years.

“He was calling me every name in the book, and I felt like a fire was put in my heart,” Cruz said. “I felt like God gave me the motivation because I never thought about standing up to him before.”

In that moment, Cruz confronted the man about the past sexual abuse. In response, the boyfriend began assaulting him. After the man pulled him into the hallway, Cruz managed to get away and ran to a neighbor’s house to call the police.

When the police arrived on the scene, he was told there wasn’t enough evidence of physical abuse to press charges.

A week later, Cruz decided to tell his guidance counselor the whole story. “I felt like we were about to die, like he was going to kill us,” he said. “I walked in the office, and I just broke down crying and told them every little detail.”

The man is currently serving a 25-year prison sentence.

While the mother was dealing with her personal issues, Cruz and his siblings were placed in the foster care system. He moved around to a few homes, excelling in school all the while.

“School, at that time, was a way of escaping the problems I was going through,” Cruz said. “I could throw myself into it, and that’s why I flourished academically.”

From December 2020 until he moved to college, Cruz lived with LSC foster parent Debbie Eaddy. She said she was proud to be part of his journey to becoming valedictorian.

“I loved seeing how people admired him at his school for what he’s been through and come through to get to this place,” she said. “He is very persistent. When he sets his mind to do something, he is going to make it happen.”

Cruz dreams of one day establishing his own shelter system to support individuals emotionally, financially and spiritually.

Now a freshman at North Carolina State University, Cruz said his two passions in life are helping people and studying psychology. He dreams of one day establishing his own shelter system to support individuals emotionally, financially and spiritually.

“I’m majoring in psychology,” he said. “I just love learning about the mind and then pairing that with my love for helping people. I want to be able to understand psychology to the point where I can help other people who are in my situation.”

Cruz said his life right now is in a state of reconstruction. He and his mom are rekindling their relationship. He is still very close to Eaddy and often spends weekends at her home.

“Everything happens for a reason,” Cruz said. “I look at my experience as a blessing rather than a curse because it has shaped who I am today.”

For more information on Lutheran Services Carolinas, go to lscarolinas.net.

“I believe in myself now”