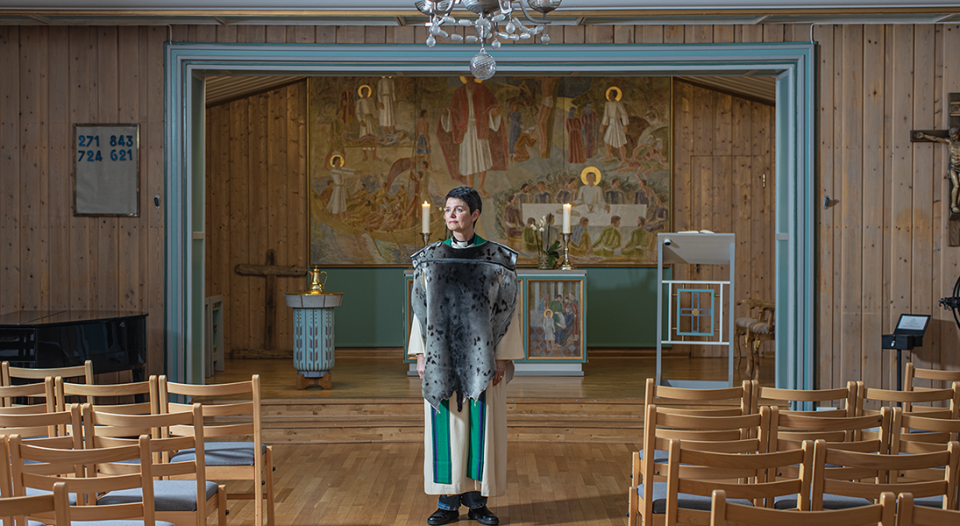 Siv Limstrand, pastor of Svalbard Church in Longyearbyen, Norway, stands in its worship space. The church has a long history of being a guidepost within society.

In the world’s northernmost settlement of Longyearbyen, Norway, in the Svalbard archipelago, Siv Limstrand serves as pastor of Svalbard Church—a congregation in the Church of Norway, a Lutheran World Federation member. As the makeup of its community and its historic identity shifts, Longyearbyen faces many changes and challenges, including those felt from climate change.

Living Lutheran spoke with Limstrand about how the church is accompanying the community through it all.

Living Lutheran: How would you describe Svalbard Church?
Limstrand: What is special is that it has been here almost from the beginning. Longyearbyen is the main town on Svalbard. We have about 2,500 people here now, with people from 52 nations. When the town was founded in 1906 by the American John Munro Longyear, it was less than 100 people overwintering. The town was taken over by the Norwegian Mining Company in 1916 and later renamed Longyearbyen. In 1920 the mining company went into collaboration with a mission society to hire the first pastor, and in 1921 they erected the first church. The church also served as the first classroom and the first library in Longyearbyen, and the pastor was also the teacher for the few children who were here.

This shows the close connection between church and society from the start, and this is what we still see traces of and build on more than 100 years later. We are an integrated part of the society, and it’s our job to think about how we can continue to serve our community along these lines.

With all of that interconnected history, what is the role of Svalbard Church, and yours as its pastor, in the community now?
It’s interesting because Norway is quite a secularized society. But people here have expectations when it comes to the church since the role has always been so visible and important. People know we are here because anything can happen, so the church is part of the support system and the crisis resources. This means I, as the local pastor, have a specific role to play. It’s also why we get our funding directly from the Norwegian state—they see the role of the church as so important to keeping the society and community together.

One of the first people I spoke to when I came here asked who I was, and when I told her she said, “Great! I like that—a woman priest.” Then she said she’s an atheist but still goes to the church a few times a year to attend a specific worship or a couple of concerts because it’s part of her life living here. People are strong supporters of the church even if they’re not believers—they trust us. It’s been great coming here and working as pastor with people having these kinds of positive expectations. I think it also means my predecessors have been decent people, good pastors.

But there is also 20% turnover in population here every year, so you have to be constantly inviting and describing what you’re trying to do as a church so you can continue building relationships and earning that trust with the new people who come.

You mentioned that 52 nations are currently represented in Longyearbyen. How does the church help form community among that much diversity in such a small area?
That may be our main challenge right now. I’m the only pastor here and there is only one church, but we have an interesting ecumenical cooperation. We take it upon ourselves to bring a Catholic priest here three times a year, and we also bring in an Orthodox priest once a year. Otherwise, we are just trying to be as inviting and inclusive as possible.

Everyone here comes from somewhere, except for the few people who were born here. But people come with their lives, their wounds. Lately I’ve had people who suddenly realize that there is something going on in their life that needs some kind of healing, and now that they’re far away from their own church, they can really deal with it. It’s interesting. To me, that also tells me something about the confidence and the trust people can have. They can feel that they will be taken care of here and that they won’t just be wounded again.

What we see on Svalbard is how the glaciers are diminishing and there is much less sea ice. It’s difficult for a polar bear to catch seal because it needs sea ice to do so. The climate is also becoming wetter, and there have been more avalanches and landslides. In 2016 there were two landslides that nearly brought the whole cemetery down to the river. For more than five years, the old cemetery has been closed for new graves. It’s allowed for burial after cremation, but we don’t bury caskets.

We address climate change as part of our intercessions in every Sunday worship, and I talk about it in sermons. We try to address all of this vulnerability and the many lives threatened because of climate change and melting sea ice. It’s an integrated part of our liturgical life.

The last coal mine in Svalbard is expected to close next year. Since the history of the town has been shaped by this industry, how will that impact people and what is the church doing to help?
There has been a gradual shift that started many years ago, so the whole society here has known for quite some time that the mining industry is coming to an end. There has been a lot of grief work that has been going on. I discussed it a bit with the director of the mining society, and he said, “You know, there are actually more people grieving outside the company than inside.”

For some of the older people in town who have lived here for so long, they know of nothing but the mining identity of the town. What we try to do as a church is to be aware, show support and solidarity, and be part of the reflection on the changes in society. It will be interesting to see what will become the identity of the town when there are no miners left—and how people will talk about the past.

What is one thing you’d like U.S. Lutherans to know about Svalbard Church?
People here have strong ownership of the church building because it’s open 24/7. People can come in whenever they like to have a cup of coffee or light a candle. To me, that’s important because it’s a kind of democratization of this holy space. So often we think we invite people to church, but then the moment they enter we tell them what to expect, what to do, how to behave. I value more and more how people actually feel at home in a church and can relate to the church for fellowship too.

Here we have the opportunity to leave the room totally unguarded, and the openness that creates, I think, is really something worth pursuing. People carry that openness with them toward worship. Opening the physical space makes the mental and spiritual space more accessible too. They don’t feel like someone is there guarding God, in a way. God doesn’t need guards.

A time for peace