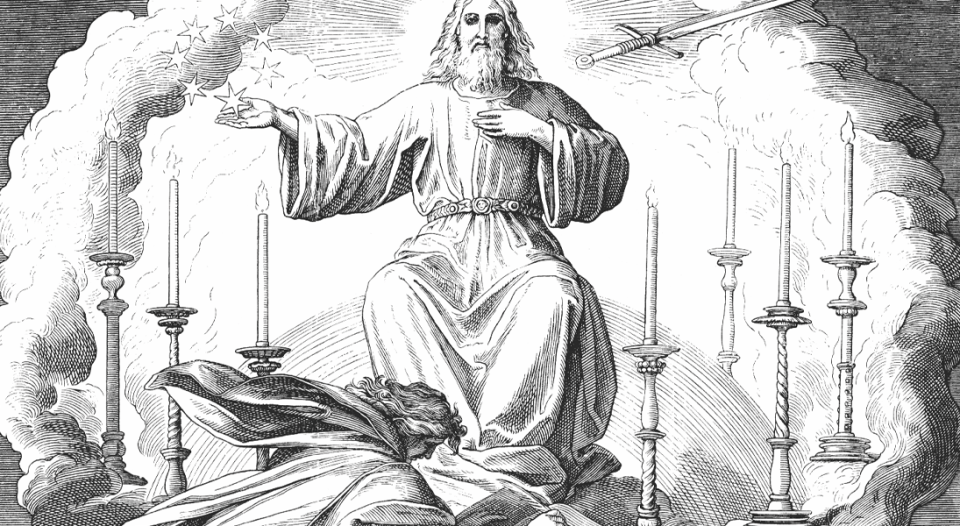 Engraving of John writing the book of Revelation by Julius Schnorr von Carolsfeld (1794-1872).

Series editor’s note: Throughout 2022, “Deeper understandings” has featured biblical scholars sharing some of their favorite books of the New Testament. Next month, Barbara Rossing will conclude this theme. —Kathryn A. Kleinhans, dean of Trinity Lutheran Seminary at Capital University, Columbus, Ohio, on behalf of the ELCA’s seminaries

In the United States, November is a pivotal month as voters cast their ballots. At this time of year, many Christians become acutely aware of the task of determining how their Christian identity might shape their decisions at the ballot box.

I admit that the book of Revelation may seem like an odd starting point for anyone seeking certain truths on, well, just about any topic. Its symbolic imagery, enigmatic creatures and numerical ciphers tend to strike rostered ministers and laity alike with fear and trepidation. Consequently, few approach the text as a source of answers but rather as a book of riddles whose answers seem hopelessly out of reach.

Yet despite its apparent mystery, Revelation presents a number of remarkably consistent themes. Among the clearest of these is a patently political claim—namely that “Jesus is king.” Revelation adopts strategies that were common in its time in order to depict him as a king. For example, Jesus is chosen by God to rule on God’s behalf (5:1-14); occupies a heavenly throne (3:21; 5:6; 7:17; 22:1, 3); distributes benefits to his loyal followers (2-3); and is offered hymnic praise befitting his royal gifts (5:9-14; 7:10; 11:15; 12:10-12).

While Christians today acknowledge the kingship of Christ—by still using terms such as “kingdom of God through Christ” or “the Son of God”—the claim has lost some of its oomph in our modern context. Since we don’t currently live under a kingship, the claim of Jesus’ kingship doesn’t seem to present an immediate political conundrum. For example, one can claim that “Jesus is king” while voting for a president without much consternation.

However, in the Roman imperial context in which this claim was first made, there was a king (of sorts) who ruled over the land in which Revelation was written: the Roman emperor. Thus, Revelation’s claim that “Jesus is king” presented a tacit political challenge to the emperor’s power. In short, the author of Revelation believed that if Jesus were the true king, then the emperor was most certainly not.

This is demonstrated most clearly insofar as the emperor and his royal power are presented as a beast under the control of Satan, the very antithesis of the rule of the Lamb (13). Revelation makes clear that a Christian could not simultaneously demonstrate allegiance to Jesus-the-king and to the Roman emperor.

Such a claim was both political and paradoxical. Many would have wondered how a man crucified as a criminal could be believed to be a king, especially when compared with the emperor’s powerful armies, magnificent palaces and unmatched wealth. The early Christian claim of Jesus’ kingship was a radical reimagining of what it meant to be a king in the first place. Indeed, it was so radical that many found it absurd.

Revelation’s claim that “Jesus is king” presented a tacit political challenge to the emperor’s power.

The author of Revelation wasn’t naive to these political realities. On the contrary, he testified to the great power that the Romans wielded in areas such as commerce and warfare. He seemed aware of the fact that the claim of Jesus’ kingship might appear absurd by the standard of imperial propaganda: “Who is like the Beast, and who can fight against it?” (13:4). However, he had different premises than those who touted imperial propaganda.

In the author’s view, God’s power works differently than imperial power. The emperor came to the throne through military force and political quid pro quo, while Jesus was designated God’s king on account of his death on the cross.

A lot of power is up for grabs in the United States this month. While Revelation may not provide explicit direction about how Christians ought to vote, it invites us to engage the idea of Jesus’ paradoxical kingship. Through this, we may be able to ask some important questions about the political systems of which we are a part, as well as our role in them.

Are there ways in which our U.S. political system is analogous to Roman imperial structures that are likewise antithetical to the paradigm of Christ on the cross? Is it possible to demonstrate allegiance both to Christ and to a political party or politician?

The notion of the kingship of Christ may provide Christians the means by which to critically encounter their own political system apart from the traditional labels of liberal or conservative, Democrat or Republican. Such a task may seem as daunting as Revelation itself. Yet, insofar as the author of Revelation foregrounds the political implications of loyalty to Christ, such questions must be asked in order for contemporary Christians to have any chance of drawing divine meaning from this book.

Faith as participation in God’s being

Martin Luther on the New Testament