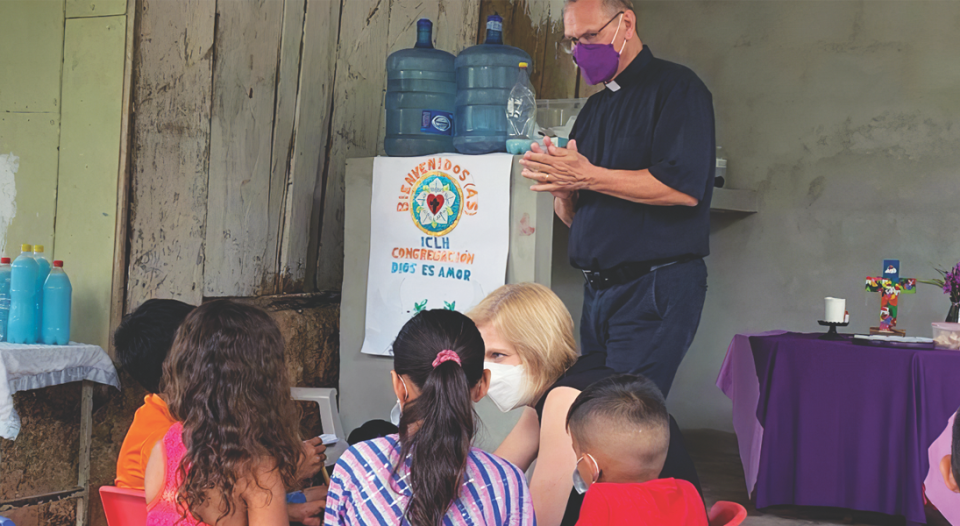 Carlos Heinz Eberle and Soraya Heinrich Eberle are “South-South” missionaries, financially supported by the ELCA but sent by a companion church, the Evangelical Church of the Lutheran Confession in Brazil, in response to a call from the Christian Lutheran Church of Honduras.

When Carlos Heinz Eberle and Soraya Heinrich Eberle moved with their children to La Ceiba, Honduras, in January 2021, they already had a web of local connections.

Called to be missionaries with the Christian Lutheran Church of Honduras (Iglesia Cristiana Luterana de Honduras, ICLH) but stuck at home due to the pandemic, they worked remotely for six months with faith communities Dios es Amor #1, Dios es Amor #2 and Nuevo Amanecer.

For several years, the three communities had experienced a revolving door of short-term leaders. “They needed not just worship leaders but a pastoral presence to accompany these families in a more permanent way,” said Julio Cesar Caballero, ICLH pastor president. Lutheran theological and leadership formation were also a priority.

The Eberles are unique in the ELCA because they are “South-South” missionaries—financially supported by the ELCA but sent by one companion church in response to a call from another. Michael Busbey, ELCA regional representative for Central America and Mexico, said such arrangements “recognize that our companions are experts in their own contexts and have wonderful gifts and talents to share with others in the body of Christ.”

After searching for—and not finding—a good fit for the position of Lutheran pastor requested by the ICLH, the ELCA entered into conversation with the Evangelical Church of the Lutheran Confession in Brazil, the largest Lutheran church in Latin America. As a result, the ICLH was able to call Carlos, a pastor from Brazil, and Soraya, a theologian and church musician.

In confirmation instruction, Soraya taught adolescents and Carlos worked at a deeper theological level with older students ranging from adults who struggled to read two pages to 20-something college students.

Once in La Ceiba, the couple launched confirmation classes, which had not taken place among the faith communities for many years.  “We wanted to prepare members to participate in the wider ICLH ministries and continue their theological formation,” Soraya said.

About 20 people ages 13 to 46 asked for confirmation instruction. Soraya taught adolescents and Carlos worked at a deeper theological level with older students ranging from adults who struggled to read two pages to 20-something college students such as Cristian Gabriel Guity Rosales.

“The many teachings that Rev. Eberle has given us are very helpful to me,” said Rosales, a leader in the Dios es Amor #2 community. “I think this preparation will make us better than before and with more structure.”

Last May, six confirmands were baptized, followed by confirmation for Rosales and 10 others, including the Eberles’ daughter Ana Raquel.

“It was a beautiful day for all,” said Carlos, who continues to offer weekly formation classes for community leaders and is planning a theological formation series for 15 ICLH pastors and leaders.

“Thanks be to God, we found a leader who is a pastor and a teacher,” Caballero said.

Gender justice was something Soraya didn’t often think about when she lived in Brazil. Living in Central America now, that’s changed, she said.

“Brazilian educator Paolo Freire always said that you need to be able to say your words,” she explained. “Living here, I see that women in Central America don’t have the ability to ‘say their words’—that is, to be in the world and have their space.”

Her experiences motivated her to develop a virtual course called “Listening to the Voices of Women” for Augsburg Lutheran Seminary in Mexico City. Offered on International Women’s Day 2022, the course has been adapted for women in La Ceiba as well as Lutheran communities in El Salvador.

Soraya also teaches a virtual liturgy and worship for the Interchurch Center for Social and Theological Studies in Managua, Nicaragua.

Busbey says the Eberles’ work fits well with the strategy of the ELCA’s Latin America and Caribbean team. “We intentionally look for connections between companion churches and institutions around themes like gender justice, for opportunities to bring people together to look at theology through the lens of gender,” he said.

“The drug dealers know who we are, they know that I am a pastor, and that I come to do pastoral duties.”

As Brazilians living in Honduras, the Eberle family shares the joys and challenges of community members. Among the significant challenges is personal security. Honduras is often designated as one of the most dangerous countries in the world due to gang and drug violence.

While drug traffickers control the towns surrounding Dios es Amor #1, Dios es Amor #2 and Nuevo Amanacer, “the Lutheran church has had a presence in these communities for a long time and has earned the trust of the people,” Carlos said. “The drug dealers know who we are, they know that I am a pastor, and that I come to do pastoral duties.”

One joy they share is the generosity and hospitality their neighbors display. “I don’t come back from service without cheese, fruit, bananas or meat,” Carlos said. “However little people have, they share that little with others. This has impacted me a lot and validated many months of formation.”

Caballero appreciates the gifts the Eberles bring to the ICLH. “They are always trying to do something new,” he said. “They are not just animating but renovating and transforming, in a spiritual sense and also in the three buildings where they worship.

“We are learning a lot as Hondurans.”

I was a stranger