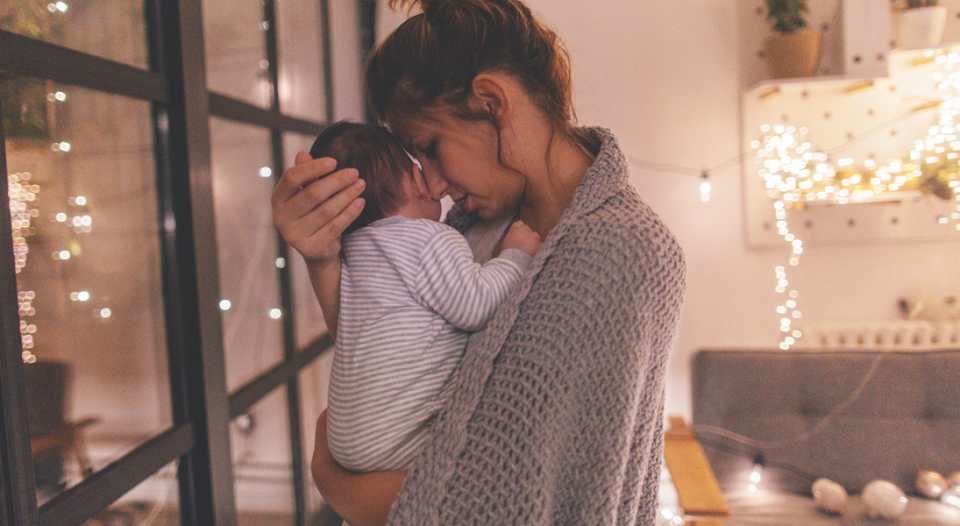 Our baby boy came early. We knew he would; our obstetrician had planned the induction two weeks before our due date. And then, as babies tend to do, he didn’t follow the schedule: he came three weeks early, after 36 hours of labor.

When we got him home, we alternately slept and cried and stared at him, a child whose heavenly peace we had to disturb every three hours to get him to eat and gain weight. We were exhausted—physically and emotionally and every other kind of -ally we knew.

And then the soups began to arrive.

Red lentil curry. Poblano corn chowder. Pasta e fagioli. Two versions of chicken wild rice, a Minnesota staple. Congee, a bone broth we’d never heard of, which went down fantastically with kimchi and jalapenos. Then, a tray of veggie lasagna that could have fed a hillside. Then the pies: chicken pot pie and wild rice pie and spaghetti pie and, of course, apple pie. Two months later, we still can’t see the bottom of our freezer.

Meal after meal, day after day, we were blessed with a simple and perfect gift: we didn’t have to think about what to eat. We love to cook, but with a newborn we struggled with the calculus of groceries and recipes. I would open the fridge and cry with joy; tucked alongside pump parts and formula pitchers were friends’ handwritten notes about just how to reheat this or what toppings to add to that. Someone else had thought through dinner, and we could feed our energy-bankrupt bodies.

Exhaustion seemed to be the universal language of parenthood, and suddenly so many people spoke it.

But the food was more than food. Each note listing ingredients or offering rewarming instructions added: “You got this,” “You’re doing great,” “It’s hard and that’s normal,” “Call us if you need 20 minutes for a shower.” Friends knew what we’d gone through because many of them had done it earlier.

Exhaustion seemed to be the universal language of parenthood, and suddenly so many people spoke it. Traumatic birth stories came forward. So many other birthing moms had been paralyzingly anxious. So many other dads and nongestational parents had tried to be strong and eventually cracked. Often we were so drained we couldn’t even reply to the cards and texts, but we wept over them with relief. Starving for sleep, we feasted on support, and we were satisfied.

There’s a story we like to tell in December about a little family of three—a mom and a baby and a nongestational dad who struggled through the first nights of their life together in a barn filled with a nursing staff of only cows and donkeys. The scene is poetic: a hazy glow surrounding the babe, a trough filled with surprisingly soft hay, animals all attentive and serene. The Divine enters the world so vulnerably, God-in-skin as a babe in arms, attended to only by his parents but with all nature bowing in reverence.

Like much religious imagery, it’s a tapestry crafted over centuries, interweaving history with artistry and imagination. (And polite fiction—if there were animals, there was probably manure.)

But like much religious imagery, it doesn’t stitch perfectly with reality: there were likely other people. The “inn” is a less common translation of the Greek word for “guest room,” which could have been on the second floor, accessible by a ladder—less than ideal for a woman in labor to climb. The stable was less a backyard barn and more an attached garage, where the family goat and donkey came in for the night, with the combination living-dining-sleeping room just a step or two raised.

The thousands of questions and decisions new parents bear often come down to them alone. There is a universal truth in the solitude of a family of three.

There was a little family, yes, that went from two to three, but all around them were likely a homeowner stoking the fire and a midwife knocking at the door, and curious children awake too late or too early (a Christmas tradition forever now!) to watch the spectacle unfold.

The first hazy days of childbirth and newborn-tending are isolating, to be sure, and exceptionally so in a country with exorbitant hospital bills and no guaranteed family leave. The thousands of questions and decisions new parents bear often come down to them alone. There is a universal truth in the solitude of a family of three, the holy family all on their own.

But there is a universal truth, too, to the family who took them in, and neighbors with swaddles, and shepherds who might take the babe as tender as a lamb so that Mary might sleep, and magi who bring gold and casseroles and frankincense.

Much as we might treasure the solitude, the reality of childbirth reminds us that we need the gift of each other, an offering of unmerited grace. This Christmas, may we find ourselves amid those who champion us when we feel most alone: “You’ve got this.” “You’re doing great.” “I’m here.”

‘Silent Night’ at 40 degrees below

A diversity of holiday festivals