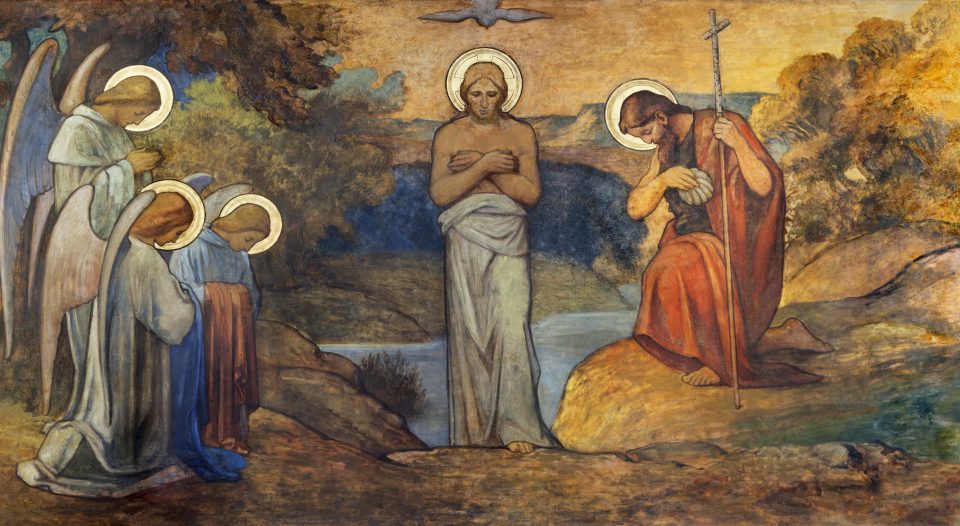 Have you ever wondered how long it’s been since you studied something? Back in high school and college, I was pretty good at calculus. But that was more than half a lifetime ago, so I’m not sure I would know how to integrate or find a derivative anymore. After decades, I’ve even forgotten how to recognize many of the symbols that I once could use in my sleep. I wonder if it might have been that way for John the Baptizer too. Did he long for knowledge that he used to have? Did John forget people he once easily recognized?

Decades before we find Jesus and John in the wilderness, we read that John leapt in Elizabeth’s womb at recognizing Mary’s voice (Luke 1:41, 44). In the intervening years, however, it doesn’t seem as if John recognized Jesus as the coming Messiah (John 1:31). He can be forgiven for this oversight. If we read the Gospels together, there was much to celebrate and wonder at around Jesus’ birth. Angel choirs, shepherds’ visits, prophets (female and male) in the temple, astrological signs and the magis’ pilgrimage all pointed to a special birth. But then what? Jesus appeared to have been an excellent student of the Torah (Luke 2:41-50). He grew in wisdom and maturity and learned how to please God and other humans. But, if we discount extra-canonical stories of childhood miracles, for several decades Jesus seemed to be a gifted amateur (John 7:15) in religious debates and nothing more. All that changed when Jesus, like everyone else in the surrounding regions, went out to see John’s baptisms.

John knew that he had been called to baptize for repentance, to prepare the way for one whom no one knew (John 1:26). When he saw his relative, he suddenly knew his purpose. I wonder how often Jesus and John had seen each other as they grew up. Did Mary make it a point to visit Elizabeth during pilgrimages? Did the boys encounter each other a few times a year? There is an old tradition that Jesus spent some time as one of John’s many disciples before moving back to Nazareth to provide for his mother and siblings after Joseph died. Whatever the case, it appears that John recognized Jesus as his relative instantly but only suddenly came to realize that Jesus was the one for whom he was preparing the way. John exclaims: “Here is the Lamb of God who takes away the sin of the world” (John 1:29). How did John come to this conclusion?

John gives a few lines of insight into his commissioning for ministry. He frames his baptizing ministry as necessary so that the Messiah will be revealed to Israel (John 1:31). God, who sent John to baptize, tells him that he will recognize the Messiah as the one upon whom the Spirit will descend and remain. The Messiah, then, will baptize with the same Spirit that descended upon him, rather than using water, like John. When John saw the Spirit rest on Jesus, he knew that, after all these years, his own relative was the one for whom he had been waiting!

John didn’t recognize Jesus as the Messiah until he was revealed by the movement of the Spirit. Once he did, he laid out the Christological basis for salvation and the Spirit-guided church.

John doesn’t just recognize that Jesus was the Messiah, but he tells all those assembled about the person and role of the Messiah. First, he notes that Jesus will function as a sacrificial lamb to take away the sins of the world. Long before Jesus spoke to his own disciples of his impending death, John foresees and proclaims Jesus’ salvific suffering and death. Second, John testifies that Jesus is the Son of God (John 1:34). As if John the Baptizer had already read this Gospel’s prologue, he announces that this Messiah isn’t just another anointed human king, but that Jesus’ ontological status is like no other human.

Finally, John portrays Jesus as a sort of dispenser of the Spirit. Just as John baptizes with water, Jesus will baptize with the Spirit. Indeed, later in this Gospel—after the resurrection, but before Pentecost—Jesus will breathe on his disciples and tell them to receive the Spirit (John 20:22). John the Baptizer makes several Christological claims about Jesus. The rest of this Gospel will fill the reader in on what John already knows: Jesus, the Son of God, will die to save humanity, and then will give the Spirit to continue God’s work.

There is plenty of reason to think that John and Jesus knew each other and saw each other at least occasionally as they grew up. But John didn’t recognize Jesus as the Messiah until he was revealed by the movement of the Spirit. But once he did, John—who was “more than a prophet” (Luke 7:26)—laid out the Christological basis for salvation and the Spirit-guided church. May we learn from John to admit when we don’t recognize Jesus for all that he is, and then to testify to all that Jesus has done and will do!

Lectionary blog: It’s not what you think!

The friction of faith