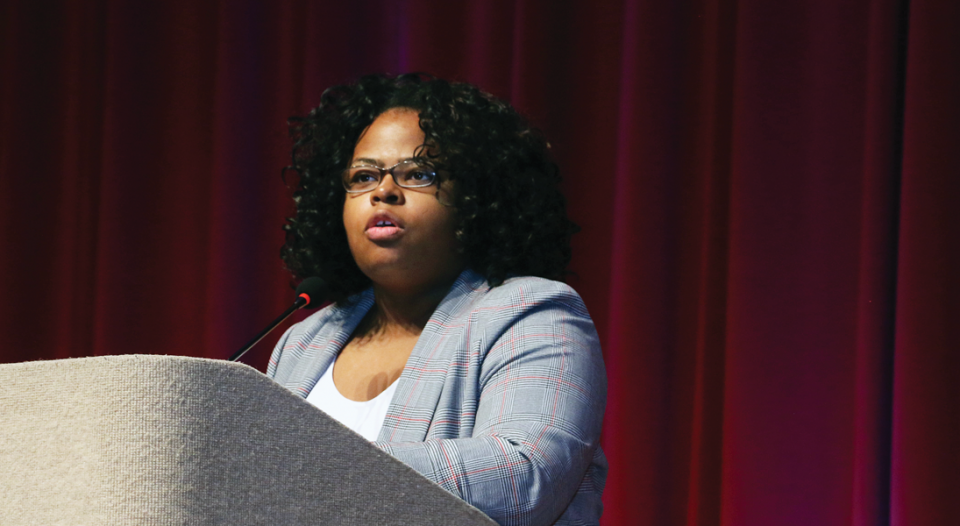 Courtesy of the North Carolina Synod

Danielle DeNise has drawn a line. Regardless of pushbacks, setbacks and clapbacks, she will call out racism.

“I have been telling people that the murder of George Floyd has forever changed me,” she explained. “I cared about anti-racism prior to this, but I was willing to compromise. His murder changed me, and I will no longer compromise on racism.”

That commitment is part of her daily work as director for evangelical mission with the North Carolina Synod. But sometimes she wonders if it will be enough.

Prayer is essential, she said. Education helps too. Like-minded allies also are a must.

After the 2016 ELCA Churchwide Assembly, DeNise urged the North Carolina Synod to follow through on the calls to engage in anti-racism, immigration advocacy and relationship-building. Drawing on ELCA racial justice resources, synod staff created the “Developing Culturally Sensitive Leaders” training.

“We are people who believe in the redemptive nature of Jesus Christ.”

“The North Carolina Synod’s use of the TWP curriculum is one example of anti-racism work happening across the ELCA,” Roberts said. “Each of our synods is strongly encouraged to develop resources and train leaders in anti-racism.”

The synod’s African Descent Strategy Team built on TWP to create a program geared toward the synod’s varied communities. This included addressing painful histories, rapidly changing present conditions and exploring a variety of contexts, such as Latinx communities and the Eastern Band of Cherokee Indians.

North Carolina’s history of institutional racism and systemic inequality stems from enslavement, Jim Crow laws, forced removal of American Indians and subjugation of Asian and Latin immigrants, among other factors. As the ELCA took shape in the 1980s, the state began its transition from rural to urban or suburban residency amid an influx of immigrants from India, Latin America and Southeast Asia. Such topics can make dialogue on race difficult, DeNise said.

“You have to just start,” she added. “We are people who believe in the redemptive nature of Jesus Christ. [European-descent ELCA members can be] terrified that we have to be perfect in anti-racism work, while we have Black and Brown siblings waiting for us to be imperfect and take a step. And when we screw up, we confess it, and we apologize for it and we move on.”

“Head knowledge that moves our heart”

In 2018, the synod hosted two TWP trainers in a seminar for 20 trainees. These participants, in turn, delivered 13 more training sessions throughout the synod over the next 18 months.

“I know that there have been efforts in other synods to implement anti-racism training,” DeNise said. “What was different is that our bishop [Tim Smith] used the word ‘required,’ and not ‘strongly encouraged’ or ‘expected.’”

The synod funded and required the training, she added, because anti-racism work is part of what it means to be what the synod calls “whole and healthy leaders.”

Synod policy requires rostered ministers to take a Basic Boundary Workshop every three years that emphasizes the church’s expectations for their professional ethics, finances, social media use and prevention of sexual misconduct. The synod considers racial justice a necessary part of the training.

From late 2019 to early 2020, the synod hosted three more sessions for 100 lay leaders. Two sessions that had been planned for April were postponed due to the pandemic.

“Anti-racism work is a boundary—racial justice is boundary work.”

In June, the synod launched the Racial Justice Network–NC Synod. Members with an interest in continuing the synod’s racial justice work can join.

Using the Mighty Networks social media platform, the group posts articles and a forum for conversation. The network also hosted a class with the lead TWP trainers called “The Hidden Curriculum of White Supremacy.”

“‘Transforming White Privilege’ allowed us to have the conversation embedded within the issues we’re dealing with in our communities,” DeNise said. “There was an opportunity at the beginning to understand—head knowledge. As you move through the training, you have the opportunity to respond in a heart way.”

Training must continue, she added. Many who took part in the initial sessions have asked what’s next. The synod is at work updating and expanding the training curriculum.

“If it is a checklist item where we abided by a churchwide resolution … we’re missing the point,” DeNise said. “The goal is head knowledge that moves our heart so that we can be God’s hands in this world.”

Making a moment a movement

Fire in my bones

“Naming whiteness” is not the end—it’s the beginning