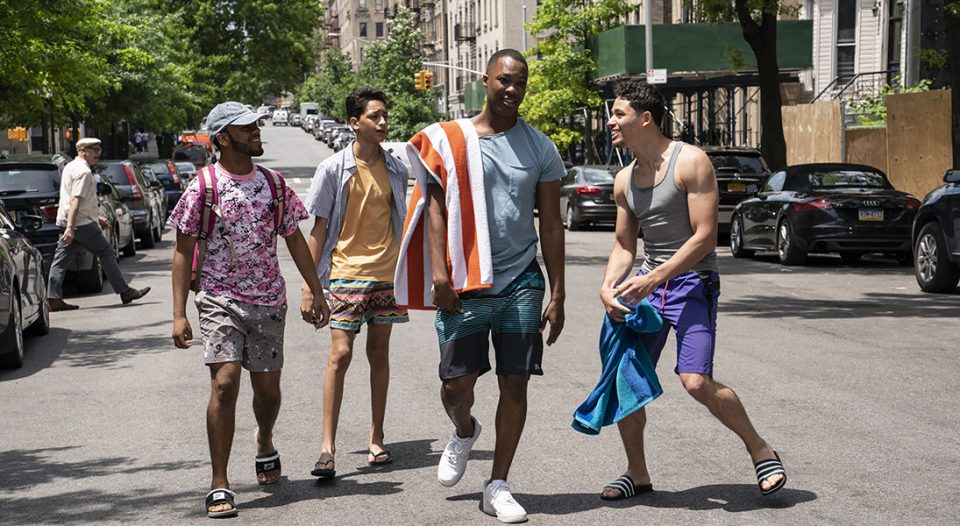 Early in the screen musical In the Heights, matriarch Abuela Claudia (Olga Merediz) describes the velvet gloves her mother purchased when she immigrated from Cuba to the Manhattan barrio Washington Heights. What some might see as an unnecessary extravagance for a family struggling to make ends meet, Abuela Claudia sees as a necessary remembrance.

“We had to assert our dignity in small ways,” she explains. “Little details to tell the world we are not invisible.”

The line serves as a thesis statement, not just for the many characters pursuing their sueñitos (“little dreams”) but for director Jon M. Chu’s approach to this adaptation of the Broadway musical by Quiara Alegría Hudes and Hamilton creator Lin-Manuel Miranda. In the Heights tells an unabashedly earnest story about Latinx and Black New Yorkers struggling to improve their lives. Through the eyes of narrator Usnavi (Anthony Ramos), Washington Heights is an ecstatic space bursting with music and dancing.

Nothing captures that vision better than the song “96,000,” which refers to the amount someone could win from a lottery ticket purchased at the bodega Usnavi manages. As they wait to hear the winning numbers, Usnavi and his friends walk to the municipal pool, indulging their lotto fantasies and buzzing with possibility. As the characters gesticulate, white chalk lines streak from their hands across the screen, forming dollar signs, light sabers, knapsacks and other objects.

More than a stylistic flourish, these white lines underscore the film’s theme. These men have no way to make their ideas into reality, but the lines allow their dreams to become real, even if they materialize only in chalk phantasms that dissipate as quickly as they appear.

When Usnavi and his friends reach the pool, everyone there joins in the song. The camera circles the pool as a crowded municipal swim area morphs into a place of communal celebration. Some belt lines about flying away, others rap about going to college, and salon workers harmonize as they describe a lavish vacation.

Benny and his neighbors long for a life of dignity, one where they’re recognized as more than just employees or statistics. They want to enjoy the life God gave them.

In the song’s most moving section, Usnavi’s friend Benny (Corey Hawkins) sings melancholy lines about wanting to go “down the highway of life with no regrets” without “breaking your neck for a paycheck.” Chu’s camera tracks alongside Benny, and in background, swimmers of various skin colors and body types dance with joy as they share in his vision of rest.

Like Abuelita Claudia, Benny is singing about little details to show that he exists. Benny and his neighbors long for a life of dignity, one where they’re recognized as more than just employees or statistics. They want to enjoy the life God gave them.

The ELCA mission statement asserts that dignity matters because “Each person is created in God’s image. We respect this God-given right to dignity and, inspired by the life of Jesus, show love and compassion for all people.” To treat any person as invisible is to say that God is invisible, because every person bears God’s image.

American racism, genocide and conquest have diminished and obscured the image of God in others, with continued reverberations today. For many in our country, dignity comes through financial or material status, such as buying velvet gloves or winning the lottery.

In the Heights reminds us that those without that status still bear God’s image and mirror God’s ability to create and transfigure. Every number in the movie testifies to the human gift of re-creation, making New York City into an exciting, life-affirming world.

But the film also poses a challenge to Christians: We cannot leave our brothers and sisters with only fantasies. We must seek to establish Christ’s kingdom, where everyone has dignity—with or without $96,000.

In Ad Astra, God’s work is on Earth