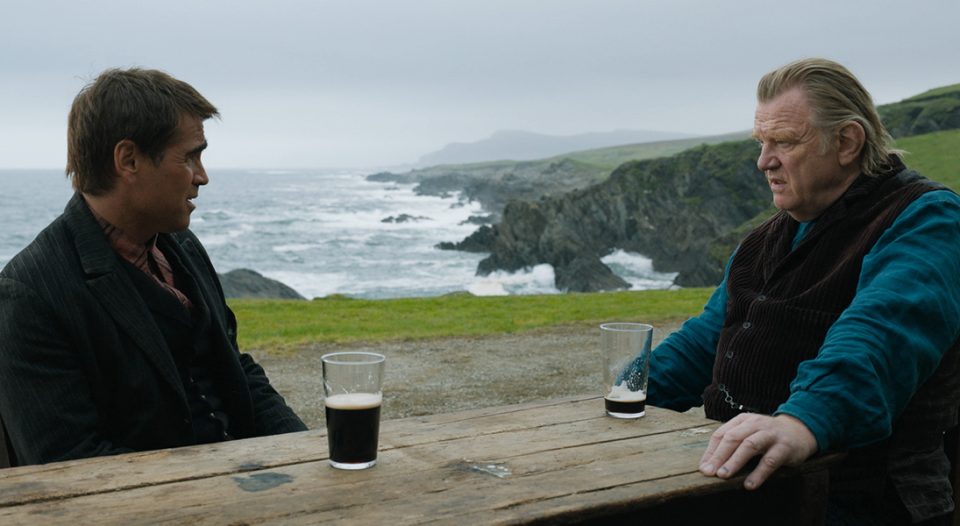 Colin Farrell (left) and Brendan Gleeson in The Banshees of Inisherin. Photo: Courtesy of Searchlight Pictures

(There are some spoilers for the film The Banshees of Inisherin ahead.)

Colm Doherty cares about important things. A lifelong resident of the fictional Irish island Inisherin, Colm has spent his days playing music and chatting at the pub with his best friend, Pádraic. But when stricken by existential dread—hastened in part by the 1923 Irish Civil War waging on the mainland—Colm (Brendan Gleason) devotes himself to making life matter, which he believes means ignoring Pádraic (Colin Farrell).

After Colm’s actions lead to the death of Pádraic’s beloved miniature donkey, Jenny, Colm seeks solace in the confessional booth, much to the chagrin of his priest (David Pearse). “Do you think God gives a damn about miniature donkeys, Colm?” asks the cleric.

“I fear he doesn’t,” Colm answers. “And I fear that’s where it all went wrong.”

With that rejoinder, Colm not only gets at the source of the conflict in The Banshees of Inishiren, the latest movie from British-Irish writer-director Martin McDonagh, but also many of the best films of 2022. Be they drama, comedy, sci-fi or horror, the movies of the past year turn their attention toward things too often dismissed.

Like Colm, the conductor Lydia Tár (Cate Blanchett), of writer-director Todd Field’s blistering drama Tár, mistreats others in her quest for excellence, forgetting the human in the humanities. In the gonzo sci-fi Everything Everywhere All at Once from oddball writer-directors Dan Kwan and Daniel Scheinert, Chinese immigrant Evelyn Wang (Michelle Yeoh) sees a thousand versions of her life and learns that it doesn’t matter if she’s a beleaguered laundromat manager or a beloved actress or a woman with hot dogs for fingers; love for others takes precedent over any failure of achievement.

Be they drama, comedy, sci-fi or horror, the movies of the past year turn their attention toward things too often dismissed.

This same theme can be found in films grounded in reality. Directed by Laura Poitras, the documentary All the Beauty and the Bloodshed follows photographer Nan Goldin as she uses her influence to seek justice against the powerful Sackler family for driving the opioid epidemic. Like the portraits of LGBTQ+ people that made Goldin famous in the 1970s and ’80s, All the Beauty celebrates the dignity of “the least of these” (Matthew 25).

Even the hyperactive mystery-comedy Glass Onion and the blockbuster horror film Nope follow suit. In the former, writer-director Rian Johnson brings back detective Benoit Blanc (Daniel Craig) from Knives Out (2019), this time to investigate a murder involving a group of powerful influencers led by the Elon Musk–like Miles Bron (Edward Norton). Nope, Jordan Peele’s third outing as a writer-director, uses an alien invasion tale to explore both a forgotten part of Hollywood history and the destructive nature of cutthroat economic systems.

In these films, we’re reminded of God’s love for the seemingly meaningless things of the world. From God establishing a nation (Genesis 12) through an elderly childless couple and picking an unimpressive shepherd (1 Samuel 16) to be their greatest king to Jesus surrounding himself with fishermen (Matthew 4:18-22) and children (Matthew 19:13-15), Scripture promises time and again that God cares about those whom the material world diminishes.

What are we, as the body of Christ, then to do? The Banshees of Inishiren may give us an answer. Confronting Colm about his behavior, a hurt Pádraic reminds his friend that he used to be nice. “Ah, well, I suppose niceness doesn’t last, then,” Colm tells Pádraic, before listing the things that do, in his opinion: music and paintings and poetry.

“So does niceness,” pleads Pádraic.

When watching Banshees, or any other beautiful movie from 2022, one hopes that art will last. But as Scripture so often insists, when art—no matter how powerful—becomes more important than people, then it’s all gone wrong.

Privilege and participation in The Batman

Calls for compassion in the films of 2021